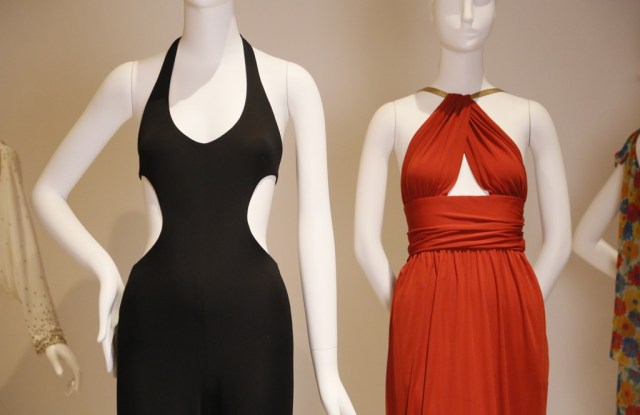 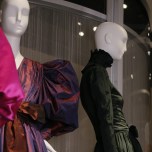 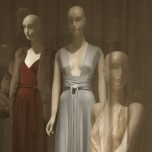 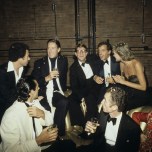 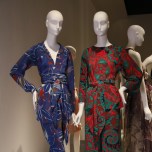 Yves Saint Laurent + Halston: Fashioning the 70s opens on Thursday at the FIT Museum. Its subtitle could be extended: “Fashioning the Seventies — and Many Decades Thereafter.”

The show’s modest scale and calm installation put the focus exactly where curators Patricia Mears and Emma McClendon, deputy director and assistant curator of the Museum, respectively, want it: On the clothes. To that end, there is no mention of the designers’ jet-set lifestyles and personal struggles. References to the high-profile, glamorous women who ultimately made the designers stars come in the “gift of” credits, including Jane Holzer for Halston, Marina Schiano for Saint Laurent and Lauren Bacall for both.

A graphic timeline at the entrance to the show begins in the early Fifties, with Roy Halston Frowick’s move from Des Moines, Iowa, to Chicago, where he took a job as a window dresser, and, Yves Saint Laurent’s from Oran, Algeria, to Paris, where he won the first and third prizes in a fashion illustration contest, and had his top design produced by Hubert de Givenchy. It ends in the early Eighties with Saint Laurent’s retrospective at the Met curated by Diana Vreeland, and Halston’s loss of his name and business.

The juxtaposition of the two designers intrigues. Saint Laurent was, in his heyday and through to today, recognized the world over as a genius, one of the most important and influential designers of all time. The case can be made, and is certainly supported by this show, that Halston has never gotten proper historical due.

The exhibit sprung from a conversation between the FIT curatorial staff and The Andy Warhol Museum in Pittsburgh, which last year held a show on the artist and Halston. An early thought of bringing that exhibit to FIT couldn’t be realized for logistical reasons, not the least of which was the cost of transporting and insuring fine art. As an alternative way of examining the fashion of the Seventies, Mears, who had recently reread Kennedy Fraser’s fashion essays on the era, brought Valerie Steele the idea of looking at the relationship between Saint Laurent and Halston, or more correctly, that of their work. Other than two brief timeline references — a photograph of Saint Laurent’s Opium launch in New York, at which Halston was present, and an item on the great Franco-American showdown at Versailles, there’s no indication of direct contact between the two.

“The Seventies is a challenging decade for fashion historians, so who better than those two great names to examine the decade?” Mears mused during a Monday afternoon walkthrough. She cited the period’s intense experimentation, which bridged Sixties’ counterculture and the opulent conservatism of the Eighties. “People were wearing vintage clothes. That had never happened before, especially at the high-fashion level. They embraced exoticism, incorporating clothes from various parts of the world into their wardrobes. And dress codes were relaxed. It wasn’t a matter of day or evening; you could wear the same thing. The rules were thrown out. So I think they were looking for a vocabulary, something to define the decade.”

This show argues that Saint Laurent and Halston provided that definition. Both have been discussed, analyzed and written about intensely, typically with considerable attention given their personal lives. “We realized no one had never examined them as [fashion] rivals,” Mears said. That noted, an item on the timeline contradicts her just a bit. In 1976, John Fairchild featured looks from the two on the front page of W, then a fashion broadsheet. The vertically split layout features two looks of Halston with the headline, “Clean” atop two of Saint Laurent with the headline, “Fantasy.”

For me, the show has three primary takeaways. One makes clear that the Clean vs. Fantasy side is only part of the story, noting points of powerful aesthetic convergence between the two designers. As a fashion journalist, I missed the heyday of both. By the time I started covering the Paris shows in the mid-Nineties, Saint Laurent was well into the creative holding pattern brought on by his cloistered existence, itself likely the result of all kinds of emotional, psychological and substance-induced traumas long gossiped about by many and documented more fairly by an informed few. From the start, I found those shows both sad and frustrating. I wanted the kind of thrilling show my friend and editor Etta Froio had experienced and described in the days when Saint Laurent’s glorious bravado could trigger a communal tear fest among fashion editors.

As for Halston, though I’ll always have Liza, my journalistic entry happened around the time of the designer’s shunning. Perilously ahead of his time in forging the high-low thing when he signed on J.C. Penney, Halston lost control of his company and by the mid-Eighties had more or less retreated from view.

In my mental snapshots, Halston is spare, minimalist; snappy ultrasuede; Mariel Hemingway at the Oscars; the aforementioned Liza’s all unconstructed sparkle on stage. Saint Laurent is the subversive Helmut Newton androgyny with its perfect tailoring and sexual innuendo; divine exotica; the fantasy of Ballet Russe and peasantry; the daring, flamboyant color plays.

This show confirms the above beautifully, the differences both obvious — the overt opulence of Saint Laurent against the minimalism of Halston — and discreet; though two strapless red-and-white gowns look utterly unfettered, Mears noted that inside, Saint Laurent’s Mondrian “is constructed like a Dior.”

Yet the show also hones in on remarkable similarities, most from the early side, before Saint Laurent’s fantastical motifs took flight. Guests walk in upon a pair of silk crepe pants “sets” in intense prints, Halston’s a royal blue floral, Saint Laurent’s a pink, red and violet paisley. Halston’s black jersey jumpsuit stands next to Saint Laurent’s red jersey gown, both cutout and body-con. And two sweeping beige wool capes display no small level of grandeur, though Mears noted the heightened theatricality of Saint Laurent’s.

The final takeaway has two parts. When you look at these clothes — not the big-sleeved, storybook approaching-the-Eighties ball gowns of Saint Laurent, but the simpler, more languid evening looks and most of the day clothes of both designers, you see why the clothes of the Seventies continue to resonate so strongly today: They make sense. They function. Which, to a large degree, was the point back then. In 1989 after a New York collections season that saw a major homage to Halston on the runways, I interviewed him on the phone about that influence. I believe it was one of his last interviews, and the only time I ever spoke with him. “I made the change from very structured clothes to a more casual look, and fashionable women picked up on it,” Halston said. “Clothes should be practical, glamorous, functional and spare.” His ultrasuede shirtdress, as well Saint Laurent’s sweater-and-skirt looks and safari tunic, could walk out of their vitrines and onto a runway today.

Oh, wait, they have. Many times. This show encapsulates just how literally the Seventies were mined this past season and, in fact, have been pilfered on and off for years. On one hand, it’s because of the genius of the likes of Saint Laurent and Halston, who identified the changing culture and experimented with clothes in ways that both played to that culture and advanced it. The templates they developed still function in a modern context 40 years hence: practical, glamorous, functional, spare.

On the down side, a literal interpretation isn’t an interpretation; it’s a copy. Project that reality onto the complete cadre of quite literal Seventies shows we’ve seen lately, and you don’t have to be a fashion Einstein to come to two conclusions. First, that too many people with too few ideas show on the runway today, and second, of those with the potential to take a historical inspiration and run with it, too few have time enough for their own full-on experimentation.

On Tuesday Viktor Horsting and Rolf Snoeren announced that, like Jean Paul Gaultier, they’re exiting ready-to-wear to focus on couture. “We have always used fashion to communicate, it is our primary means of artistic expression,” Horsting said. “Ready-to-wear (with its fast pace, many deadlines and fierce competition) started to feel creatively restricting. By letting go of it, we gain more time and freedom.”

The time and freedom to think and to experiment. To take an inspiration, from the Seventies or elsewhere, and explode it into something new. What did Peter Allen sing back in the day? “Everything old is new again.” In the case of the creative process, bring it on.

Yves Saint Laurent + Halston: Fashioning the 70s runs through April 18 at The Museum at FIT.