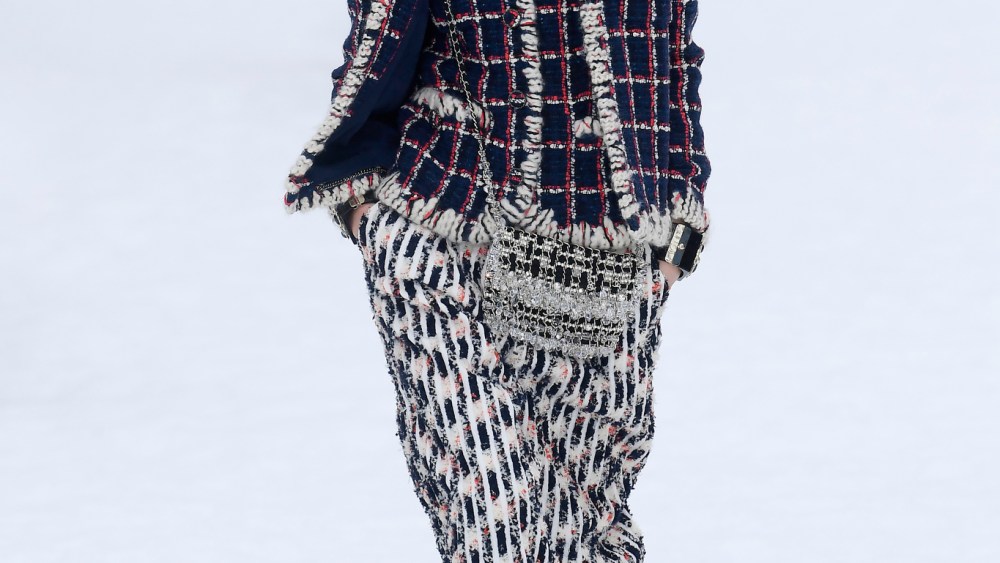 The Chanel jacket — a remarkable creation and one of fashion’s most quantifiably inspirational items, up there along with Levi’s 501s, the white T and the LBD.

To put a bow on the fall 2019 runway season, it seems fitting to focus on this curious gem of a jacket, the major fashion appeal of which has bridged centuries. Try as they might to predict the future, designers can’t. They can only hope to move in a direction that will entice consumers to buy in. So none could have known when designing his or her collection that the European season would be rocked by the death of Karl Lagerfeld, just as the Milan shows were getting underway. Yet numerous designers included in their lineups looks derived directly from the Chanel jacket. Among the devotees: Marc Jacobs, Celine’s Hedi Slimane, Gucci’s Alessandro Michele, Donatella Versace, Anna Sui and Balmain’s Olivier Rousteing.

Which raises the rhetorical question of “what’s new?” The answer, of course, is nothing, really. The Chanel jacket long ago became the Mona Lisa of sartorial chic, with designers openly appropriating its masterful square-cut, tweedy, braid-trimmed, brass-buttoned allure for their own use. Not everyone is thrilled — the brand is very protective of its trademark and insists the Chanel jacket emanates from one address only, on Rue Cambon.

That said, Mademoiselle herself would understand. “Only those with no memory insist on their originality,” she famously said. Indeed, her own original four-pocket design wasn’t truly original; rather, she pilfered its essence from the uniform worn by the elevator operator at Salzburg’s Mittersill hotel, once owned by Baron Hubert von Pantz, who was, in the Thirties, her lover. Chanel crossed gender with the concept, chiced it up and started it on its odyssey toward fashion legend.

Yet while Coco Chanel’s creation ascended to the pinnacle of fashion, she couldn’t maintain its position there. The Chanel that Lagerfeld took over was dusty-musty, and no one much cared about its once hallowed iconography. He proved himself a mighty fashion god, resurrecting the house by embracing and twisting its codes, starting with the famous jacket. Along the way, he renewed the currency and must-have status that’s still going strong. No small trick; that boxy little classic can easily swing frumpy; Karl imbued it with a cool that continues to resonate across generations. And he worked it to myriad effect — chic, playful, elegant, sporty, refined, trashy. He knew how to run with a great idea.

It’s interesting that for fall, Lagerfeld’s last season, the Chanel collection featured fewer invocations of the jacket than he typically turned out, though the tweed element resonated in glorious coats and trousers. Perhaps this shift indicates the increased hand of Virginie Viard, Karl’s longtime right hand, now in creative control of the house. Conversely, on other runways, the classic influence radiated through moods as various as Karl’s own: Jacobs’ discrete trouser moment; Balmain’s broad-shouldered glam slam; Sui’s retro flamboyance; Celine’s bourgeois restraint.

Will the Chanel jacket retain its inspirational power in the post-Karl era? Only time will tell. But fall 2019 offered the best kind of homage. It had nothing to do elegiac reverence (Karl would be horrified) and everything to do with the power of a single great idea, brilliantly renewed over time, to inspire others and ignite their creativity. Here, a creative array of not-Chanel jackets.