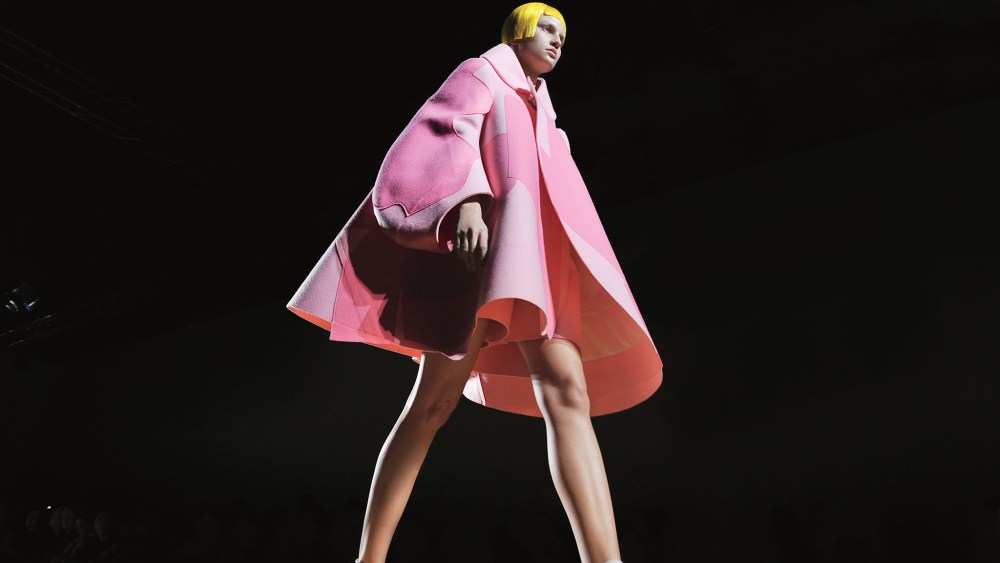 Quick: What single word, a noun, first comes to mind in reference to the work of Rei Kawakubo? Were that little game of word association posed to people well versed in the career of the brilliant Comme des Garçons designer, who has captivated and confounded for 40-plus years, probably 100 out of 100 would not come up with “joy.” Fascination, provocation, curiosity, difficulty, strangeness, resonance, dissonance, even wonder — yes. But joy, probably not.

Yet looking back — and feeling back — in advance of Kawakubo’s hotly anticipated, surefire-blockbuster show at The Costume Institute at The Metropolitan Museum of Art, opening at the May 1 gala and to the public on May 4, that’s my word: Joy. Not the joy typically associated with fashion, triggered on the obvious aesthetic level among consumers and professionals alike: viewing an understandably beautiful dress makes me happy in the moment — glorious in itself. For some people, those who consciously look at fashion on multiple levels, driven by career, cultural pursuit or obsessive love, its explicit joy often runs deeper, infiltrating often-dormant recesses of emotion and intellect. That may sound just too silly to merit classification as pretentious, but for those passionate about big-picture fashion, it’s neither.

At its best, fashion allows for serious historical, philosophical and intellectual consideration. While mulling the cultural moment through any lens often gives rise to grim conclusions, such fashion-based discourse usually starts from a place of admiration, however abstract. Whether you get the clothes or not, something about them compels discussion. For me, therein lies the joy of experiencing Kawakubo’s ongoing brilliance. Over the course of 20-plus years, a regular participant on the fashion circuit takes in countless shows that afford much to contemplate, and even more to forget. Those shows worth remembering resonate because they strike something within, whether triggering a previously unconsidered thought, unsettling a prejudice or transporting the viewer to a place of wonder or outrage. When emotional and intellectual points converge through fashion, those who love the medium find joy.

Over and over with her work, Kawakubo elicits that joyful fusion. Thinking back on the most memorable moments of my show-going experience, a disproportionate number are Comme des Garçons. Her titles alone make you think. One of the first shows of hers that I covered was “Sweeter Than Sweet” for fall 1995. It struck me as prom time at the apocalypse, its girlish hoop skirts paired with gorgeous pastel wool lace jackets, but with the twists and turns that only Kawakubo could conjure, including some bound arms, fastened to the torso with airy tulle, but bound nonetheless. A year later, in “Flowering Clothes,” she referenced fragility of a more ethereal sort, “part Renaissance, part china doll, part celestial choir.” For fall 2014, she was in far darker mode, with “Monster,” her models in green lipstick and piles of woolen darkness, indicating, she said in her show notes, “The craziness of humanity, the fear we all have, the feeling of going beyond common sense” expressed by “something that could be ugly or beautiful.”

Early on, she showed a collection in which she set out to “transcend gender,” using language way ahead of its time. She didn’t invent fashionable androgyny, but early on saw it in a context more significant than mere tricks with tailoring. The current cultural discussion proves the concept prescient.

Always with Kawakubo, there’s the yearning to find those ponderous, deep thoughts — sometimes because their audacity hits you in the face and sometimes, because you don’t want to be the one who doesn’t “get it.” Yet some collections have featured elements of obvious humor. Who didn’t smile at the remarkable “Kaleidoscope” moment for spring 1996, when Kawakubo sent in the clowns, literally, in multibright stripes and color blocks between giant cotton candy pouf wigs and two-toned shoes (lavender on one side, yellow on the other)? Similarly, when taking in her famous bumpy-lumpy collection of spring 1997, one couldn’t help reimagining the famed denizen of Notre Dame as she, the misshapen Quasimoda done up in formfitting pastel gingham. Kawakubo said her intention was “to explore new body forms…body becomes dress becomes body becomes dress.”

Amusing? Yes — and Kawakubo knows it. She’s a brilliant woman; she knows if something is funny on the surface, even if she intends more arcane meanings beneath. Clown clothes amuse. So, too, those bumps and lumps — even as they disguised what were, pillowing removed, some body-con, sexy fare.

Often, the message is not readily discernible. Fall 2005’s “Broken Brides”: What was the married designer saying about marriage as an institution, with her lineup of breathtaking, ghostly brides? Who knows? Clearly, the thought process was a complicated one. For those of us then on the edit staff of W magazine, at the time sister publication to WWD, the joy proved immeasurable when the chance arose to photograph Katie Holmes as a Comme “Broken Bride” six weeks into her then-euphoric romance with Tom Cruise.

Blurry visions of beauty are everywhere throughout Kawakubo’s complex portfolio, as well as highly textured visions of gender, power, sexuality, social standing, and on and on. And of fashion itself. For fall 2013, she explored “The infinity of tailoring. Everything you can do with a jacket and pants,” which included an onslaught of bows atop outsized men’s tailoring. The previous year, she delivered one of her most magical collections, through which she proclaimed, “The future is two dimensions.” It was colorful and cartoon-esque in its giant-sized, paper-doll silhouettes.

This spring, Kawakubo went in a different direction altogether with “Invisible Clothes,” a dark, mesmerizing head trip, filled with inventive silhouettes that evoked certain thoughts — Elizabethan Bo Peep, a frilled Grim Reaper — while looking like nothing you’ve ever seen before.

Yet, in fashion at least, audacity of ideas means nothing without the knowledge and skill to execute. Kawakubo’s craftsmanship awes. Her ability to visualize complicated concepts as concrete creations — she doesn’t necessarily think in terms of “clothes” — and then to translate those visualizations into reality is mind-boggling, the complications of her cuts and constructions, rendered with perfection, remarkable.

So much so that Kawakubo has long resided at the top of the list of those designers most admired by her peers, who consider her a wellspring of never-ending invention. She herself isn’t so sure. At the risk of doing something Kawakubo herself would never do — descend to cliché — she is her own harshest critic. Though she’s often referred to as press-shy, that descriptive remains uncorroborated. Perhaps it’s accurate, or perhaps she just prefers not to bother with the press. Kawakubo may be decidedly press adverse, but WWD can boast a good handful of interviews with her through the years. The first that I found (more accurately, the first found by WWD’s miracle-working archivist Jina Parks) dates to Mach 1, 1983, written by Ben Brantley. (Yes, that Ben Brantley. He worked here.) Through her interpreter Stella Ishii, Kawakubo acknowledged typical designer self-doubt. “Doing fittings, I do a lot of reflecting and feel a lot of anxieties as to whether this is what I really wanted, whether it’s as strong as the image in my mind,” she said.

Seventeen years later, in May 2000, when she was honored in an offbeat event at Harvard’s Graduate School of Design (her candidacy for the award pushed by guest professor Calvin Tsao and, unofficially, then third-year student Harold Koda, on what proved to be an academic sabbatical from the Met), she suggested that her work would only become more difficult with time. “The definition of experience is that the more experience one has, more and more [work] is no longer new,” she said, her husband Adrian Joffe acting as interpreter this time out. “We live in such an information-saturated world. It’s hard to give people something they haven’t seen.” She has repeated that sentiment numerous times since.

In that context, the designer’s predictive powers have failed her. Season after season, she continues to surprise, shock, invent, instigate. Here’s to The Met, for putting Kawakubo’s decades of unique, provocative fashion joy on public display.