WWD's executive editor shares a portfolio of some of the best fashion spring 2012 has to offer. 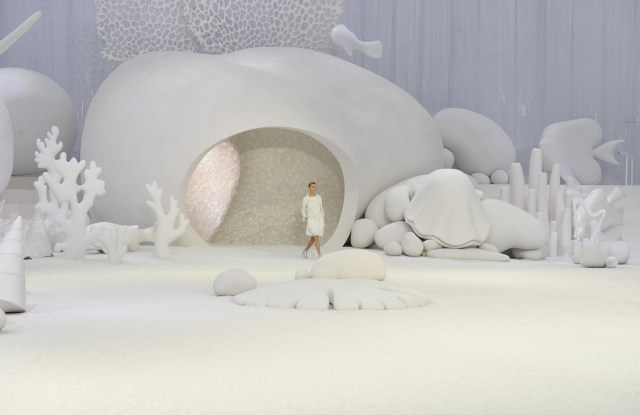 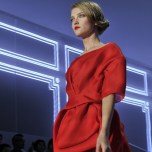 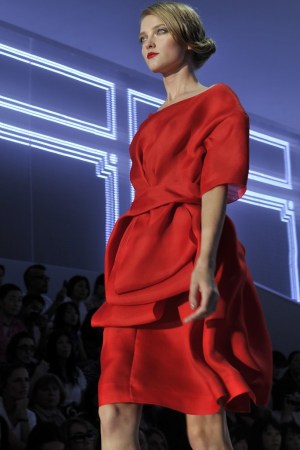 Fashion provides so much to celebrate, from the grand gesture to the intimate moment, the audacious display and the current as gentle as a waft of feathers against charmeuse. The visual diversity of spring 2012 is highlighted below, a portfolio of some of the best fashion the season has to offer.

Yet fashion’s diversity operates on various levels; the dif- ference between a complicated Comme des Garçons bubble chapeau and a fragile silk slip-dress by Calvin Klein’s Francisco Costa only one. Typically, any given season offers a microcosm of a bigger picture, enveloping not only the sartorial range but of the significant, off-the-runway themes of the moment.

One such level of wonderful variety is the range of impressive fashion across the board from powerhouse to tiny independent designer (which is not to say there aren’t way too many shows, particularly in New York — another topic for another time). On the powerhouse side, an ongoing discussion centers on the supremacy of brand over designer. An important and polarizing topic thrust into acute prominence by the John Galliano drama at Dior, its arguments swing both philosophical and practical. Which is more important? The suits would likely line up on the side of the brand; certainly a rethinking (read: diminishing) of the importance of the individual designer while highlighting brand luster would eliminate some of the potential headaches involved in employing big-talent, big-ego artistic types. Conversely, how could those artistic types themselves believe in anything other than the supremacy of the creation, and therefore the creator?

To the former point, any designer, the most talented and low-maintenance included, could be hit by a bus tomorrow. The truly great brands must be able to withstand the vicissitudes of change, triggered not only by the rare cataclysmic event but the guaranteed passage of time. Those entrusted with managing the brand have that as their mandate. The strength of a brand cannot rely solely on its designer. That said, how many established brands have wallowed in mediocrity linked directly to unsuccessful hires in the head designer slot?

The photo above, the result of that happy combination of boundless imagination and the deepest of pockets, speaks volumes: the undersea world of Karl Lagerfeld and Chanel, installed in all its pristine, astonishing glory throughout the expanse of the Grand Palais. There, enormous fanciful anemone, sea horses, stingrays and coral branches kept company, and near the end of the show, a giant clam opened to reveal the sultry chanteuse Florence Welch. It all played like an ultrachic, decolorized union of Jean Cocteau and Walt Disney that had the been-there, seen-that fashion crowd ambling about preshow like wonder-struck tourists.

Lagerfeld employed the set as the backdrop for remarkable fashion — gorgeous clothes that digressed from the season’s eveningwear obsession with an overt focus on the light of day. “Chanel makes clothes to sell, no?” he quipped in a preview. The lineup was fabulous enough to prod Hal Rubenstein, InStyle’s tough-to-impress fashion editor, to declare it “one of the great fashion moments of all time.”

Jump to the next day. Guests at Louis Vuitton’s tent pitched in the Cour Carrée at the Louvre came upon a vast white carousel, as over-the-top as it was charming, the mood a 180-degree shift from the house’s Night Porter elevator installation the season before. Perched upon the horses: girls looking oh-so-pretty in feathered guipure and colorful croc (the latter rumored to have cost a whopping 900,000 euros, or about $1.24 million).

Alone, each show was sensational. Together, they made a statement about fashion at its most powerful. The audience left both awed by the audacity of the statements and entranced by the beauty of the clothes. In each case, the specific success relied on the combination of brand and designer. Only an elite few houses with the money to spend millions on a 14-minute show can stage such mega-events; only an elite few designers can produce clothes capable of standing up to the theatrics. Anything less than great clothes (or, at least, than the potential for great clothes; no designer serves an ace every time out) would have rendered the respective spectacles ridiculous. On the other hand, remarkable clothes don’t need spectacle to engage their audience.

A great, storied brand needs a great designer — one of the few, rare talents — to maintain its creative reputation, or must adjust accordingly. For his Dior couture show in July, Bill Gaytten went for a level of production unjustified by the clothes, resulting in a genuine sense of audience discomfort that both designer and house had been thrust into that situation. Conversely, for this ready-to-wear, Gaytten scaled back on the showmanship, instead highlighting the house codes clearly and less flamboyantly, and the results were lovely.

Yet the integral relationship between brand and designer is about more than showtime extravaganza — including when the house founder (or his descendant) remains firmly at the helm. Miuccia Prada and Ralph Lauren present their collections with less brouhaha than Lagerfeld and Jacobs at Chanel and Vuitton, but their messages ring no less powerful. If either Prada or Lauren, their brands among the power elite, decided to relinquish the creative reins now, imagine the pressure on the successor. Lovers of kitsch are a dime a dozen in fashion, but how many designers out there can so brilliantly play a provocative, ultrachic collection against a set decorated with giant, cartoonish Styrofoam cars? And how many would a) have the guts to create an exquisitely intimate, irony-free, glass-floored environment worthy of Fred and Ginger and b) use it to enhance an equally earnest array of beautiful clothes — which, by the way, stood up all as splendidly several weeks later in a very different venue, the grandeur of the Alice Tully Hall stage at Lincoln Center?

A step or two beneath the megapowers, there’s no question that brands can stay viable without supernova designers; plenty do just fine, while bringing something worthwhile to the fashion party. But the supernova designer elevates the house, if not always to speedy bottom-line security (that requires the alignment of many factors, not to mention some luck) then to major creative import and influence. Exhibits A, B and C: Alber Elbaz at Lanvin, Raf Simons at Jil Sander, Phoebe Philo at Céline.

The Dior job is in the news again and will be until a permanent successor to Galliano is named. If that doesn’t happen soon, a decision will have to be made regarding how to handle the upcoming couture. I’ve gone on record with the belief that Marc Jacobs makes an obvious and sound choice for many reasons. Those talks have proven difficult and it may not happen. If not, there are some fabulously talented designers out there — the Rodarte girls, Haider Ackermann, Riccardo Tisci, Sarah Burton, to name a few. In addition, in some musty corner of some atelier, the next Nicolas Ghesquière may be laboring anonymously, waiting to be discovered.

Whichever way that most high-profile hiring goes, it will not be the first or last time a brand will tap a designer, and with that choice will indicate where the house honchos stand on the balancing act between brand and designer. Thinking back to Chanel’s underwater romp, it seems that 20-some years ago, Alain Wertheimer got it exactly right—and set the discussion in motion for years to come.