Matthew Mazzucca forges his own path as creative director for the retailer whose visual audacity is the stuff of legend. 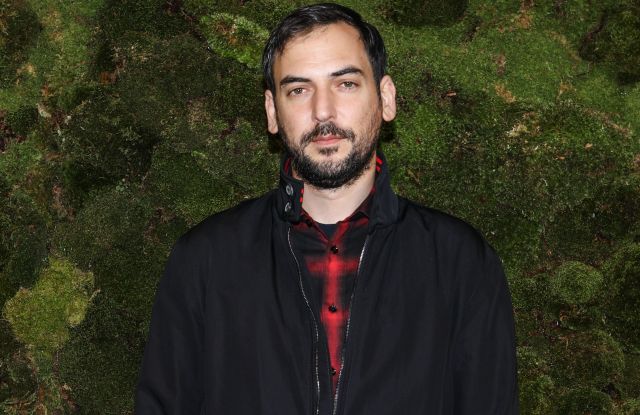 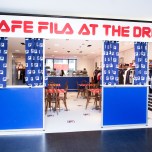 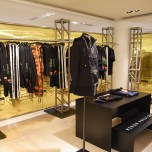 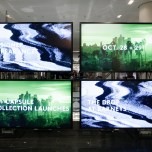 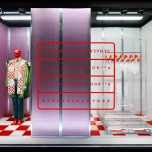 Barneys New York’s Madison Avenue windows — long an essential stop on Manhattan’s must-do holiday check list. On Thursday, when the curtain goes up on “Haas for the Holidays,” the unveiling will highlight a new phase in the retailer’s legendary visual direction, the first holiday windows designed under the watch of creative director and senior vice president Matthew Mazzucca.

Yet while Mazzucca is excited about the collaboration with artist brothers Simon and Nikolai Haas (see Thursday’s Digital Daily), he stresses that his job is about more than window-dressing the uptown Manhattan flagship. “Madison Avenue is not the focal point. The company is the focal point,” he says.

After six years as the store’s director of design, Mazzucca ascended to his current role last spring, when Daniella Vitale succeeded Mark Lee as chief executive officer. Taking on one of the most high-profile creative positions in global retail, Mazzucca directly succeeded Dennis Freedman, who in turn had assumed the reins from Simon Doonan.

While aware and respectful of the mantle he’s assumed, and of its inherent expectations, Mazzucca is not at all intimidated of forging his own path. “The windows will always be the introduction [to the Barneys aesthetic],” he says. “But I don’t think that the windows are the key piece.” Nor is confinement within expected parameters. “I think that before, we were so all in that we were just concerned about maintaining the aesthetic of the store in a very clean, precise, modern way. I think that we need to disrupt that in a huge way.”

That said, Mazzucca acknowledges that the crystallization of his creative plan for Barneys remains fluid; he’s “still figuring it out,” while assessing recent initiatives to determine their relative success. One thing is sure: He wants to push beyond the obvious to highlight elements distinctive to Barneys; for example, men’s wear (which fascinates him) not getting short shrift in the windows and highlighting special services such as luxury tailoring. “I’m really interested in the scope of the brand as a whole,” Mazzucca says. “There are so many ‘ready-mades’ in design right now. I think it’s interesting to look at where there are opportunities to grow and create change. How do you take on and make feel youthful and fresh something that’s always been considered geared more toward an older audience?”

He mentions the store’s recent “The Drop” initiative, a weekend-long event at the Madison Avenue outpost that highlighted streetwear. “I’m glad to get away from just the windows and really focus on how do we make the store so impactful,” he says, citing particularly the fourth floor, where new, younger customers mingled with traditional customers for brands like The Row, creating a different, exciting energy. “People were everywhere, and it was such a good spirit,” he says. “Opening spaces that had been reserved in the past for private events, like The Penthouse, seeing kids just come in and out — it was kind of a space to stay and hang out. Access and flexibility. People either like it or not, but you shouldn’t keep a quiet space. You should make it activated and alive.”

The question is how to broaden that concept upward and apply it to more traditional luxury fashion. “Are there ways to bring in the other designers into that world, and do activations similar to The Drop that are not just focused on streetwear?” Mazzucca asks, articulating a topic on the table for executive conversation at Barneys. “I think that’s going to be the main push for next year.”

About eight months into his new job, Mazzucca projects authority and confidence. Yet he acknowledges that, even after a six-year stint working closely with Freedman, elements of the position took him by surprise. “So many things that you know from the outside perspective, you think it’s much easier. But then, as you are engaged in it, you see more of the complexities of everything, the decision-making and how you have to be very quick on your feet and be a really fast problem-solver. I kind of knew that, but I didn’t realize,” he says, adding that the reality of the role has “changed my perspective of what the people who had it before did. I have a lot of admiration, because it’s a big scope.”

That admiration is overt but not blind. While putting his own mark on Barneys, Mazzucca expects to integrate but not imitate elements of his famous predecessors. Doonan’s approach was about “humor, craft, culture, accessible pop culture,” aspects of which Mazzucca loves, even if much of what he did would now “be considered wildly inappropriate.” Aside from today’s PC proclivities, Mazzucca considers so boundless and ebullient an aesthetic difficult to control, “because there are no guidelines” and it “became a runaway train of ideas…hard to grow and move through and develop and elevate after a certain point.” Under Freedman, “everything became very streamlined, clean, open, very exacting display and everything was very gallery…which I love; I love exhibition design. But it’s very exact…And I think there is something that becomes a little — it’s non-accessible.”

Mazzucca aims to step back from those “very art-, art-, art-, art-driven esoteric windows and presentations to making things funny and accessible, and a contrast against the existing architecture.” Essential to that is not stopping with the windows, but carrying the story inside — an initiative that cannot begin and end on Madison Avenue. “We put a lot of energy into Madison, and it’s time to broaden our scope and figure out how do we get people to stay in all our doors,” he says. “I think this year we have still focused on Downtown and Madison, but it is my goal to really support all the stores.” Elevated accessibility is essential, creating “that kind of energy with the viewer where they feel part of it and not a spectator. That’s the big thing.”

Another big thing: Vitale’s interest in analytics. Mazzucca notes a clear change in direction from Lee’s tenure to hers, at least regarding the approach to in-store visuals. “Before, I felt like everything was very creatively driven,” he says, whereas now, data informs even creative decisions. “It’s like we’re actually analyzing how do we do this, how do we make this happen within a budget, make this work and be effective? And that’s a Daniella thing. She thinks, but she is also wildly creative.”

Mazzucca found his way to fashion retail circuitously. He entered Parsons to study furniture design as the program was developing a focus on need-based design, including furniture created specifically for people with physical limitations. It was thus about “problem-solving,” a word and concept that figure prominently in Mazzucca’s conversation. “You could make it look as beautiful as you want but there was a core value to it, it wasn’t just an excess design process,” he says.

But a senior-year course in set design intrigued, and after some work experience and a soul-searching road trip, he secured a career-defining position with Stefan Beckman. He calls it “my eye-opener into what the fashion industry was” and admits that the appeal wasn’t just about creative fulfillment. “He took me on set one day and they had catering, and I was like, ‘This is amazing! I want to do this!’” Mazzucca recalls. “I was like, ‘I love set design, but I love that I get a free lunch.’ Stefan and I hit it off right away because I just wanted to work day and night.”

Over the course of nine years, “I did anything for him, and everything because it was such a great mentorship.” That included the necessity for his first passport as he worked on projects for Steven Klein and Steven Meisel. He worked as well on numerous fashion shows for Marc Jacobs during the heady years of the major set installations. Along the way, Mazzucca was struck by the creative passions that went into it all, “the hours and ambition and the work…it was really incredible.”

After Beckman, Mazzucca briefly had his own production company — Black Frame’s Brian Phillips provided his first assignment: Rodarte’s “Quick Take” show at the Cooper Hewitt. He loved Kate and Laura Mulleavy’s outsider approach to fashion, and appreciated the learning curve. The Cooper Hewitt is a wing of the Smithsonian, “so the rules did apply, and I was used to not having to follow so many rules.”

In both situations, he called on the tenets of “problem-solving” that had interested him in school, if in entirely different contexts. Working for Beckman, he enjoyed the quick turnaround of designing and building the Marc sets, because, with too much time for a project, “it gets overthought and overworked.” Once out on his own in a horrid economy, he learned how to stretch a budget. “It was like, you have $1,000 to do the set, your fee, the trucking, everything. So that was like major problem-solving.”

Now, the problem-solving continues. While Vitale and ceo’s across the retail spectrum must face head-on a litany of issues from casualization to the decline of bricks-and-mortar, Mazzucca focuses on a different issue — balancing creative expression with cultural sensitivities. “I lose sleep over it,” he says. While back in the day, “Simon could just make the message and do it any way he wanted, whether he offended or didn’t…[Now] you still have to be charged but you have to be careful.”

Yet being “charged” has become increasingly difficult, a matter disconcerting both for the inherent constraints on his job and the ramifications for the greater culture. “You don’t want to support hate by any means, but you don’t want to take away anybody’s right to peacefully communicate,” he says. As a creative communicator, “It scares me — that it will take away the ability to create because there is so much fear in who you might offend.”

Mazzucca worries about the future of film, whether actors will feel comfortable developing complicated characters, and whether ultimately, fantasy will become film’s only safe subject matter. “Are people just going to go see ‘Avengers 20’ because it’s just made-up fantasy?”

Fashion, too, finds itself in a quagmire, with designers who have traditionally often mined cultural realities beyond their own for inspiration now hesitant to expose such references. “You’re not even allowed to go through [the creative] process, and that’s really scary,” Mazzucca says. “It seems like there could be a moment where everything becomes very, very bland.”

But not at Barneys, at least not yet. Mazzucca points to the message of joy and inclusion of the high-energy Haas for the Holiday windows, delivered via a fanciful, far-flung cast of characters, with a witty, child-like exuberance. Yet that’s only one side of Barneys today. By way of contrast, he recalls the Calvin Klein windows installed during New York Fashion Week. “Calvin can be this hard, mechanical world,” he says. “You’ve got to toggle and move between the two. You can’t just always go down the same road, saying the same thing over and over again, because the message gets completely lost.”

One day, he might go further still. With the environment a front-and-center global concern, Mazzucca has thought about the wastefulness of temporary installations and how to approach that issue in his work. “Is there something there to inform a bigger idea? How do you get something out of nothing?” he muses. “I love the idea of empty windows. I think there is a really big statement in that. Like, what is in the store?”