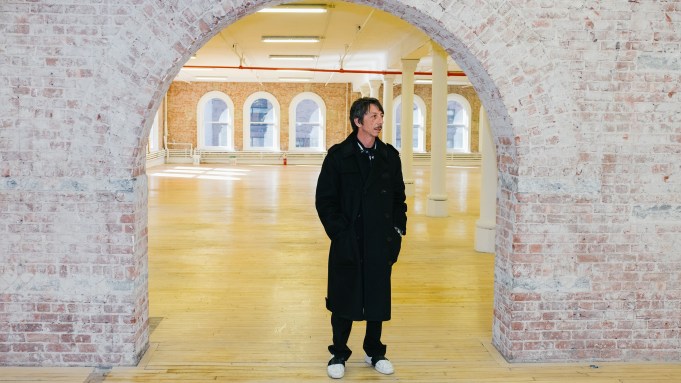 Pierpaolo Piccioli takes a carpe diem approach to travel. On a short trip to New York City in March, he hit the Boom Boom Room, Katz’s Deli, The Red Rooster, Minton’s (its facade anyway; it was closed) and Il Buco. And that was just the first day, between afternoon touchdown at John F. Kennedy airport and lights out at the Crosby Street Hotel.

The primary purpose of his two-and-a-half-day visit was scouting; Piccioli was seeking a location for today’s Valentino cruise show. Despite his packed official schedule, Piccioli worked in plenty of extracurricular stops. “I love being everywhere,” he says. It didn’t hurt that his traveling companion, Valentino’s worldwide communications director, Francesca Leoni, lived and worked in New York for several years, keeps an apartment here and is a full-on Gotham-o-phile — a highly knowledgeable one, at that. They checked out the Boom Boom Room as a venue for tonight’s postshow party, and everywhere else, just for fun: Minton’s and The Red Rooster (for its music and a drink) because Leoni loves Harlem and Katz’s Deli, for its “When Harry Met Sally” “I’ll have what she’s having” kitsch. As for Il Buco — well, you have to eat. And when you see Mick Jagger post-pasta, all the better.

The next day, the scouting began, with Mona Swanson, Valentino’s U.S. head of public relations, and Francesca Nardi, events and celebrity director, in from Milan. I went along to observe.

While nothing in fashion is cast in stone (this season’s pronouncement might easily become next season’s distant memory), for now at least, Piccioli has decided to make New York his pre-season base. He showed pre-fall in an intimate show at the recently reopened Beekman hotel, and was determined to show cruise here as well. “I want to make this our home as Paris is for ready-to-wear and couture,” he says. He’s unphased by the more exotic wanderlust of his competitors that, this season alone, has taken Dior deep into the California desert, Louis Vuitton to Kyoto and, next week, Gucci to Florence. (Though Chanel stayed in Paris this time out, its itinerant ways are legendary.)

“Maybe sometimes you choose a location because you want to relate the brand’s values,” he says. “For a collection like this, that is a celebration of diversity, New York is that place. It’s a place where I feel good. It’s the same sensation I want to deliver [to the audience].”

His scouting goal: To find “something very authentic of the city, not rebuilt, not glamorous. Something intimate and integrated into the city. Something that, you feel the spirit and not just the surface of the place. Authentic. Not supernew.”

First stop, on the Lower East Side: the Angel Orensanz Foundation, a well-known event space and once a reformed synagogue. The space exists in a condition of bohemian dishabille, its Gothic Revival arches offset by unexpected colors — pinks, blues. Right now, the main nave is occupied with props for a well-known television show that’s filming an episode there. The setting is equal part charming and dizzying. Roberto Santiago shows us around, from the main space with its big distressed wood altar, to the mezzanine (a popular choice for wedding cocktails), and downstairs. The backstage would be housed down here. We talked about the space’s fashion history; Alexander McQueen had the first of his two New York shows there in 1996; Sarah Jessica Parker and Matthew Broderick were married there. (She wore black.)

Hailing from Rome, the land of religious dwellings, Piccioli questions the propriety of staging a fashion show in a synagogue, even a former one. Would it be deemed disrespectful?

The quizzical look on Santiago’s face telegraphs that he doesn’t understand the question. As each of Piccioli’s party attempts to understand, he offers, “Sorry, I’m a little lost.” “In general, living in Rome, if you took a church and you make it not a church anymore, like, oh, you would have so many complaints,” Leoni explains. Light bulb on, Santiago offers that no such worry here. The space has long been used for diverse events, and, he says, “This is New York.”

In fact, the conversation proves hypothetical. Piccioli finds the space intriguing but “too much,” even if the multicolored lighting can be toned down. “And I don’t feel it’s intimate enough.”

Next, Sara Altobelli, from Space in the Raw, meets us for a series of stops, beginning with a soon-to-be-vacated office space with glass-box compartments around part of its perimeter. Piccioli could see using the glass to create a scrim effect. “It can be interesting to do like a live backstage, something like that,” he says. Otherwise, he finds the space wanting of personality. Not so the ground floor of a corner building at 315 Spring Street, a raw expanse anchored by rows of metal columns. Two fully windowed exposures all but erase the divide between inside and the street. Piccioli loves it.

Twenty Exchange Place is a grand Cross & Cross edifice with imposing iron doors depicting methods of transportation popular when the building was completed in 1931. Built to house City Bank Farmers Trust Company (later Citibank), and now landmarked, it’s deemed wrong immediately, (if tacitly, out of respect for Sara and our in-house guide). Though intriguing, Piccioli finds the space too grand for his vision — but very interesting. The conversation covers the movies shot there — “Inside Man,” definitely, and, the guide tells us, scenes from “Spiderman II,” at least according to his 14-year-old-son. As we check out the massive vault, he notes that such strongholds are the most expensive elements to remove from buildings. Hence, this one’s not going anywhere.

The last stop of the day, The Beekman hotel, where the roof deck is soon to open. Piccioli wouldn’t mind returning to the site of his pre-fall success. “It would be interesting to have it in a different spot there,” he says, referencing the roof. “There’s the issue of what if it rains,” Leoni plays devil’s advocate. “If it rains, you go inside,” he counters. “It’s not new, but [the location] works.” We check it out accompanied by hotel staffer Amy O’Keefe, who advises caution, a the roof isn’t quite ready for use. As it turns out, once we get up there, it feels a bit cramped and complicated to negotiate. Spring Street remains in the lead.

The next morning finds us at the Morgan Library, where Swanson offers an account of the previous evening’s exploits that included a group visit to Uniqlo; a drink at the Trailer Park Lounge (an old Leoni haunt); and almost crashing an event at the Rainbow Room, honest to God. Despite being seriously (albeit chicly) underdressed, the Valentino contingent walked past the sign-in desk and into an elevator with a group of fete guests. Swanson, in proper PR mode, shrugs, “I was like, those women should never have let us up.” The team manning the upstairs checkpoint proved more vigilant. “We were like, we’d like to come in and have a drink.’ They’re like, ‘yeah, no.” So it was on to Bond Street for dinner. The consensus: Delicious.

Though a glimpse of The Rainbow Room views wasn’t meant to be, the Morgan Library makes up for it with a different kind of visual feast. As with the bank, the library’s grandeur takes it out of consideration for the show, but not as a seed bed of wonderment. Our guide, Eileen Curran, offers background: Pierpont Morgan built the library for his personal use, selecting McKim, Mead & White for the commission. The famed architects scoured the world for materials, she says, culling them from Italy and Egypt, among other places, and inspiration for the rotunda floor at the Vatican.

Morgan’s own penchant for collection was even more sweeping, Curran notes, “From books to musical manuscripts to paintings to drawings to literary, historic items,” across diverse periods and genres. Piccioli stops at a display case holding “President Grant’s Call for Tolerance.” “It’s amazing how President Obama said that ‘we have to fight for what we already have,’” Piccioli observes. “These kind of things, tolerance, [Grant wrote in] in 1885, and we are still fighting for that.” He’s drawn as well to a Symbolist display in one of the galleries. He admires the movement for its impact through the period bridging the 19th and 20th centuries, “the same moment as Freud.”

Piccioli is fascinated by such transitional moments in history, citing as well the period when the Middle Ages moved into the Renaissance. “These are the moments when minds can change,” he says, referencing “the Guttenberg machine that changed the world. The idea of having a book as something personal was born. It’s really close to the idea of the digital revolution.”

The provocative conversation notwithstanding, Piccioli explains why the space won’t work for the show: “It’s too much. I think you are rightly distracted by the paintings.”

And so it’s off to loftier (literally) places, including a pair of vast artists’ spaces, the scheduled appointments broken up with stops at Mast Books and the vintage mecca Resurrection. After some impressively speedy shopping, it’s back to the main event.

I must leave the group, having misjudged the timing for a late-afternoon appointment. One location remains, 0 Bond Street. We joke — correctly — that this will be the one Piccioli chooses. (I’ll stop by with Swanson at a later time.) He’s mad for it — a beautiful, raw space marked by graceful brick arches with ample windows following the same curved lines. “I feel the energy of New York in the intimacy of the loft,” he tells me later. “It’s a good balance between the intimacy and the street. It’s New York as I used to dream of New York.”

That will not be the last stop for Piccioli and Leoni; their 11 p.m. flight departure time allows for one more sub-sojourn, back up to Harlem, to the Apollo Theater’s Amateur Night, where they’ll catch the first hour before heading to the airport, Swanson having procured tickets online earlier in the day. Sometime between now and then, another stop. “Pierpaolo,” Leoni insists, “we have to do the Mega Million, the $150 million, before we leave. Hey, you never know.”