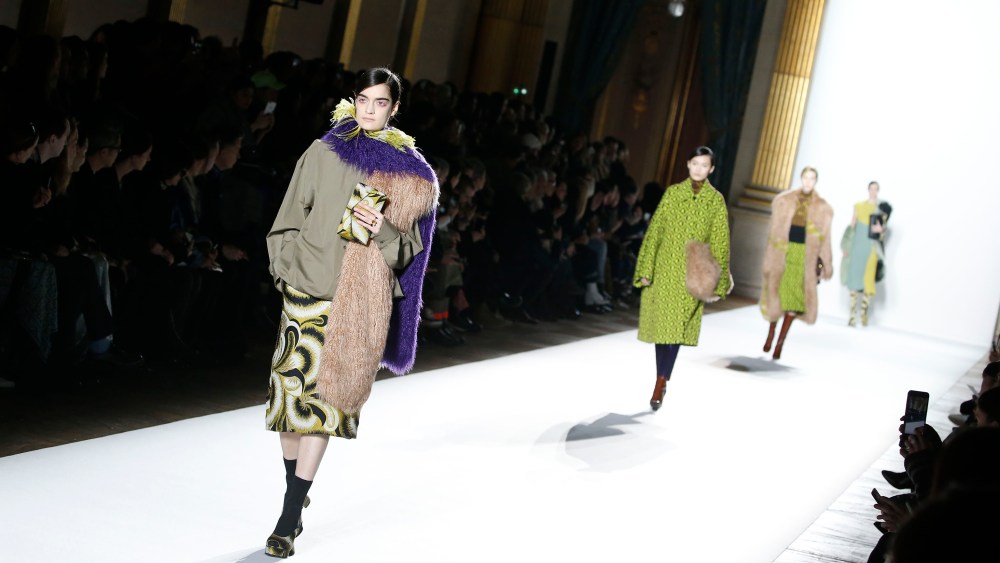 As WWD reported last week, Dries Van Noten is shopping his company around. Multiple sources maintain that he has enlisted Vendôme Global Partners to circulate a book on his firm’s operations to potential buyers. Whether Van Noten wants to cash out completely or take on an investor is unclear. One can infer that decades into a brilliant, honorable fashion career dedicated primarily to the creation of chic, elegant clothes that speak with power and respect to his wildly devoted customer base, he wants to secure the company’s future while providing for his own — and maybe enjoying its spoils a bit more than the job currently allows. Along with the career, Van Noten has a personal life, a partner, a beautiful garden. As a fashion journalist, I get it. As a long-employed person who sometimes gets tired of the grind, I get it. As a woman who gets dressed every morning, my knickers are twisted.

Over the past 10 years, a hefty percentage of my ready-to-wear purchases has been Dries Van Noten. His clothes are always interesting. They are neither juvenile nor mundane. Though I do the Barneys-Bergdorf thing, my favorite place to buy Dries is at his brand’s store on Quai Malaquais in Paris. (I’m not an online shopper for clothes — too disorganized for returns.) I make a stop just about every time I’m in Paris, so four times a year. I invariably find something (this past trip: printed Lurex polo dress; silk shirtdress). And I almost always see other industry women shopping as well – not street-style peacocks, but professional women who want to look a realistic kind of good, women like my colleague Jessica Iredale, the Washington Post’s Robin Givhan. (Robin and I have an almost karmic Dries connection; we always bump into each other there.)

I daresay, we’re not alone. Anecdotally, I know countless women who swear by Dries, women across ages and career disciplines. The clothes say something very potent and powerful to those who buy and wear them. As WWD’s Evan Clark pointed out in his investment piece, Van Noten doesn’t do a lot of what is considered de rigueur across much of the industry — no fragrances, no highly touted pre-collections. Handbags and shoes, yes, but in measured proportions. Throughout years of seasonal previews, I’ve never heard Van Noten invoke the word “Millennials” as a grail, yet plenty of young women love his clothes. Personally, he’s neither hermit nor publicity whore. As for marketing — no advertising, and when’s the last time you saw a Dries stunner on the red carpet? Courting the celebrity crowd — not his thing. Nor has he aspired to ubiquity. Van Noten has a handful of brand stores — Antwerp, Hong Kong, Tokyo, Paris and Seoul — and a mostly wholesale business based on rtw. It’s the clothes on our backs that keep his clients coming back again and again for the latest variants of his finely honed, highly specific play of feminine and masculine, intense prints and exotic flourish.

The fact that Van Noten is exploring investment possibilities doesn’t mean he intends to retire; in fact, sources maintain the opposite, that he remains passionate about his work and the people who work for him, and has every intention of continuing at the creative helm. A smart buyer should insist on it, for as long as Van Noten chooses to stay engaged; he possesses one of fashion’s most distinctive points of view that has in turn secured for his company incredible client loyalty. Fantastic — if it works.

Twenty or so years of history offer several parallel situations: major independent designer at the height of his/her creativity and influence and with a customer base devoted to a degree approaching fashion cultism, who then sold the company while intending to stay put at the creative helm. Alas, the obvious examples offer some cautionary tales, with only Azzedine Alaïa and Richemont top of mind as a success story. The group left him alone, and the company grew. In other cases — Helmut Lang, Jil Sander, Martin Margiela, Marni — the designer’s original intent to stay on was thwarted by whatever — mutual frustration, divergent interests, perhaps the shock of realizing the trade off for the big check: You no longer get to call the shots. None of those founding designers lasted beyond short-term stints, and only Maison Margiela is now in the hands of a creative, John Galliano, whose talent is unquestionably at least equal to that of the house founder. Marni’s Francesco Risso is performing well as are Jil Sander’s Luke and Lucie Meier, but both tenures are too nascent to evaluate fully. At least in case of Sander, there has been an irrevocable diaspora of the original cultish fan base. Ditto that of Helmut Lang, which, though a source of some perfectly good clothes, is now out of the designer-level conversation.

In each of those cases, clothes that spoke to a knowledgeable clientele were the brand’s primary strength and driver of the business, as is the case with Van Noten. Throughout the mutual vetting process, it’s essential not to lose sight of that core strength. Yet too often, in the lust for growth (and social media appeal) new ownership focuses on the big-bucks categories like fragrance and accessories. That’s natural and fine, as long as in the process the clothes don’t take a back seat — and the brand’s real customers (as opposed to the largely imaginary wealthy Millennials and Gen Zers everyone loves to court) don’t get lost in the frenzy.

The bottom line is that it’s not enough to buy a major name, rtw-centric brand currently in the forefront of fashion and expect great, wearable fashion to continue as a byproduct of a strategy refocused on marketing hype and ancillary, revenue-producing categories. The defining creative vision must stay front-and-center of the whole thing. If the company in question is one like Dries, viewed as a wellspring of sartorial integrity and chic based on a proven aesthetic, the new buyer must be genuinely dedicated to building on that base, and allowing the designer the freedom to evolve it without counterproductive meddling. While Martin Margiela’s exit from his company was, unsurprising, shrouded in mystery, the Sander and Lang exits attracted all kinds of media attention and speculation. In Sander’s case, it sounded like major personality conflicts from the get-go. Whatever the particulars of the discord, after the founders’ departures, neither brand was able to retain its place in the forefront of fashion.

In today’s brand-designer equation, the brands have the lion’s share of the power. But the designers — the right ones in the right situations — still have the creative magic. While many attract strong consumer followings, few today achieve that cultish devotion of the sort once enjoyed by Sander and Lang and today, by Van Noten. By that, I don’t mean the short-term frenzies (of those types, some may cross over to long-term creative juggernauts. Time will tell.) Rather, I mean the designers (not all house founders) whose work women talk about as essential to their lives. (Yes, it’s a First World kind of essential, but that’s where luxury and fashion exist.) Among those on the short list: Karl Lagerfeld (though he and Chanel may be too powerful for cult status, the customer loyalty is of religious intensity); Miuccia Prada; Van Noten; Valentino’s Pierpaolo Piccioli; Stella McCartney; probably The Row ladies, and Isabel Marant.

Two others long of such status are out of the picture, at least for now: Phoebe Philo and Alber Elbaz. Despite the hype surrounding her Céline successor, Hedi Slimane (and the fact that his runway follies at Saint Laurent certainly drove business), countless women are devastated by Philo’s departure from fashion; who in this industry hasn’t either said or heard someone say, “What will we wear now?”

Then there’s Elbaz, whose messy split from Lanvin ultimately resulted in the brand’s sale to Fosun Fashion Group, which last month named Joann Cheng, the brand’s temporary chief executive officer. “Lanvin is a truly iconic and storied brand with immense potential…” she said at the time. No argument that Lanvin has the potential for resuscitation — any brand does, given the right choice of designer, in itself not easy (if plucking an Alessandro Michele from the back room were easy, everyone would do it). There also has to be the determination to provide that designer with working conditions that are other than a nightmare, which apparently Lanvin had not done from the last years of Elbaz’s tenure through the truncated terms of his two successors, Bouchra Jarrar and Olivier Lapidus.

But is Lanvin an “iconic” house? That depends upon one’s interpretation of the word. If Cheng meant that it’s an old house founded by a forward-thinking innovator, its name out there in some context since 1889, yes. But by “iconic” she meant a house with instantly recognizable iconography traceable to that founder, and so powerful that a breathless consumer base awaits its renaissance — a resounding no. The woman who misses Lanvin passionately misses Lanvin as recreated by Elbaz. Were he to go somewhere else, she would follow. Could the brand win her back? Yes, but it would have to be the right designer, whether Elbaz (if at this point either side would consider a comeback) or a genius newcomer. Another two-season misfire, and Lanvin will only slip further down fashion’s desirability meter and back toward the irrelevancy from which Elbaz elevated it so beautifully, until the whole thing fell apart.

Which circles back to Van Noten’s quest for a buyer. Let’s hope that when he inks a deal — and he will; it’s a jewel of a business, ripe for growth — the lucky bidder will recognize that the brand’s myriad growth-generating possibilities all spring from its founder’s bold creative vision, and that said vision is rooted in rtw. Because whether or not Van Noten sells, we women have to get dressed.