It has taken three-plus years and endless speculation, but the designer is finally back.

By Bridget Foley and Marcy Medina on October 13, 2014
View Slideshow 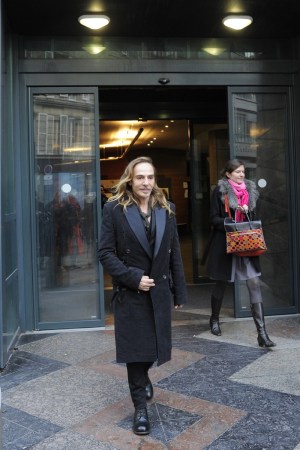 It has taken three-plus years and endless speculation, but John Galliano is finally back. Or he will be, when he presents his first haute couture collection for Maison Martin Margiela in January.

Since the news broke last week in WWD that Renzo Rosso had hired Galliano, much has been made of two elements in the bizarre and tragic saga of one of the few designers in memory who deserves the handle of creative genius. The first element: forgiveness, and whether it’s time to move on from Galliano’s on-camera slurs, spoken in the throes of addiction. Those who have gone on the record, mostly European retailers and designers, sound eager to welcome back Galliano to fashion’s frenetic fray. It’s the human condition to make mistakes, they reason, and the human condition to forgive even the most horrific mistakes. Galliano is said to have worked hard, earnestly and quietly, to make amends with the Jewish community, and he has been praised for his efforts by Jewish leaders, including the Anti-Defamation League’s Abraham H. Foxman, who advised, “It’s time for people who care to move on.” He wished Galliano “the greatest of success.”

Those who remember the designer at his height must believe that, on an aesthetic level at least, fashion is a lesser place without him. Those who were there (and there are fewer and fewer of us) recall the awe, the glory, the rapture of experiencing Galliano. (Yes, rapture. In the long-ago late Nineties, fashion rapture was an aspirational condition rather than an embarrassment. Then came the triumph of pragmatism in the name of global reach and a timely show start.)

The power of Galliano grabbed you in the most intimate of presentations — his fall 1994 effort for his namesake label, shown in the Schlumberger apartment and featuring a 17-look, smoking-orientalism hybrid, “1940s tailoring fused with Japanese Kabuki” — or on the grandest of scales: his fall 1999 Dior Couture Matrix extravaganza at Versailles. There were, for Galliano, shows celebrating Siouxsie and the Banshees and a naughty schoolgirl with a Theda Bara fixation. After one show, the ruse of which was a children’s self-created parade, complete with fanciful cardboard flats, my then-colleague Joe Zee wondered, “Who says, ‘Let’s put a kitchen pot on the head of the boy in a dress?’” And for Dior, there was endless wonder, especially come couture: an ode to Mata Hari at the Bagatelle Gardens, a punked-out she-warrior Wonder Woman, the shocking ode to the homeless population of Paris.

Along the way, Galliano got ample credit for being a purveyor of beauty but insufficient recognition for his influence; via his embrace of the long-dormant, languid bias gown, he changed the way women dress at night. How can we not be excited at the prospect of his return?

Yet Galliano’s second act calls into consideration two giant mammals in the room, of which, so far, little has been said. The proverbial elephant: The potential limits of forgiveness. In on-the-record comments solicited by my Paris-based colleague Miles Socha, a number of mostly European retailers expressed excitement about Galliano’s hiring and the possibilities inherent in the fusion of two seemingly disparate aesthetics. These respondents either expressed or implied that it’s time to forgive. Most of us would not want to be judged by our singular worst moment, nor would we fare well under that circumstance.

Yet, in the open marketplace, judgment isn’t rooted in heart and soul alone. Whether clients, particularly American clients, are ready to forgive remains a question. Galliano’s contrition rings true, and he has the passage of time and industry good will in his favor. But numerous U.S.-based retailers are something other than stalwart in that good will. Several either declined to speak on the record or didn’t respond to requests for comment at all. Off the record, some said that, creatively, they’re intrigued by the hire and think it’s time to welcome back Galliano, but, ultimately, their clients will have the final say. “If people are clearly upset and let us know, we’ll have to react,” said one. Echoed another: “If real customers are offended and upset, we have to listen to that.”

Susan Stone of Savannah in Santa Monica, Calif., was alone in going on the record, and spoke thoughtfully on the matter. She called Galliano “ a huge talent,” noting, “apart from the controversy, it’s exciting to see what he’ll do.” But her position remains unresolved. “I am grappling with this,” Stone said on Friday. “I just got back from Paris. I am still finishing orders, and the news is only four days old. I love the line and I’d hate to lose it. It has a unique point of view and we need unique; the market is so full of clothes that are derivative. Have I reached a final decision? No. I’m still battling with it. I’m also a realist….There are many factors I have to weigh. I want to talk to people, to customers, colleagues.” While those conversations will inform her decision, they won’t amount to a definitive vote. “Ultimately it will be my decision because ethically, I set the tone for my business and it comes from me,” Stone said.

It’s also possible — make that factual, according to some retailers — that a good percentage of customers, even sophisticated customers, aren’t all that up on, and don’t care all that much about, the designers behind the brands they like. Obviously, there’s a food chain — hello, Karl and Chanel — but, as one goes through the ranks, the designer recognition diminishes. One retailer suggested that if you asked 100 clients who designs Gucci, maybe five would know.

Maison Martin Margiela remains essentially a niche brand in the U.S. Whereas Oscar de la Renta might have suffered serious fallout had he hired Galliano because his clientele relates to him on a knowledgeable and quasi-personal level, Margiela doesn’t have anything near that personal resonance. Clients may or may not know the heritage, the odd backstory of fashion’s onetime elusive Belgian Garbo designer; they do know Maison Margiela delivers on terrific jackets and pants.

Which brings us to the white rhino (second-largest land mammal) in the room: Is Galliano still good? Is he still relevant? And even if the answer to both of those questions is yes, does this all make sense? It’s well known within fashion that, by the time of his dismissal, Galliano’s work had grown tired, with an uncomfortable familiarity that was often out of touch with the main. His last several years were marked by moments of characteristic brilliance — Dior Couture’s spring 2007 origami jewel — and moments that were anything but, some seemingly traceable to the designer’s mood du jour. One Galliano Dior collection played like a truculent response to criticism that he couldn’t or wouldn’t do commercial clothes. He sent out a lineup of blander-than-bland beige suits that he didn’t bother to fit properly — they swam on his models. It telegraphed: “You want commercial? I’ll give you commercial.”

But can he? Galliano is that most rare of beings — a fashion artist, a true creator. He is also a supreme storyteller and committed romantic; even at its most belligerent and aggressive, his work was marked by a wistful lyricism. He was at the forefront of a moment in fashion that, though not all that distant in years, seems like a lifetime ago: a more open-minded runway moment, when dazzling escapism from one designer could coexist with glamorized reality from another.

What never sashayed front-and-center in Galliano’s work: a serious concern for day clothes. Even at his peak, the day clothes were (a) an afterthought, (b) camp or (c) some wonderfully eccentric costumery for a wayward schoolgirl, wanton damsel, hard-luck duchess or another character from his gloriously rich imagination. But simple, cool jackets and pants? Not so much. Conversely, couture calendar showings aside, Maison Martin Margiela is not thought of as a go-to stop for elegant party fare.

What we’ve seen of Galliano’s work since his exile was extremely beautiful: roughly half of an impressive Oscar de la Renta collection (it was easy to discern which designer did what) and Kate Moss’s wedding gown — an exquisite dream. It was also limited. While the de la Renta work featured plenty of day looks, they were hardly of the urban-street fare of the Margiela ilk.

The question of whether Galliano will succeed in fusing his own and the Margiela aesthetics is a fashion-speak way of wondering if he can play to the brand’s (or any) commercial core — day clothes, which, for all of their deconstructed, cleft-toe, undone, coolest-stitched-on-label-on-Earth aura, are in fact, at this moment in the brand’s life, quite accessible.