The windows juxtapose the work of Comme des Garçons' Rei Kawakubo with the prolific works of Louise Bourgeois. 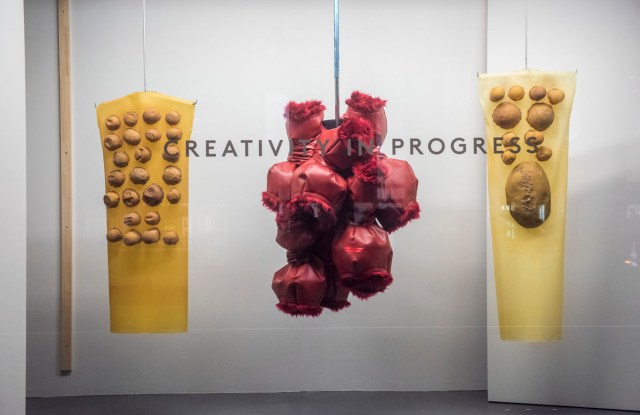 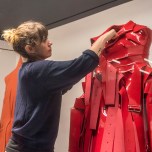 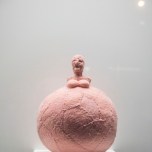 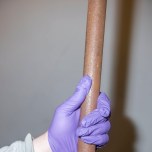 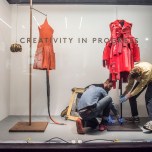 At night on Madison Avenue, diners coming and going from Fred’s at Barneys New York typically generate the primary activity for blocks. Yet on Wednesday evening, a quiet intensity disrupted that typical 9 p.m. calm. An assemblage of creative working types patrolled the half-block occupied by the store, focused on perfecting a major installation. As reported, the two-part window exhibit opening today at both Barneys’ outposts, Madison downtown and Seventh Avenue, corresponds with next week’s unveiling of the Rei Kawakubo exhibit at the Met. The retailer’s project juxtaposes the designer’s work against that of another brilliant female artist, Louise Bourgeois, who left a prolific and diverse body of work when she passed away in 2010 at the age of 98.

“They’ve gone too far,” one departing Fred’s diner, a chic fortysomething woman, was overheard expressing to her companion. Whether she’s right or wrong depends upon one’s perspective. By any measure, the exhibit is audacious and fascinating, sure to captivate Kawakubo devotees, Bourgeois acolytes, art-fashion-pop-culture-big-event junkies and the merely curious. Certainly anyone planning to take in the Met exhibit through its first five weeks during which the windows will be installed would be remiss not to allot time to also visit both Barneys sites. Whether the reaction is glee, intellectual wonderment or smug rejection, no one will turn the corner unaffected by the compelling exhibit, conceived and curated by Dennis Freedman, Barney’s former creative director and executive vice president.

Freedman; Matthew Mazzucca, Barneys current creative director and senior vice president, and Jerry Gorovoy, Bourgeois’ longtime assistant/confidant/gatekeeper-of-the-legacy, were among those assembled on the sidewalk. They also spoke about the project in interviews last week.

“I think what happens with our windows, no viewpoint is imposed on anybody,” Mazzucca said. “But the collaborations and the projects we’ve done have always challenged people’s perceptions of beauty. I think that’s part of Barneys’ DNA. I think people are going to look at this and respond. That’s what we’ve always thrived on.”

The project started some 18 months or so ago, according to Freedman, as Barneys was lining up its designer window commitments, with Comme des Garçons a major priority. After the initial contact (initiated by which side, he was unsure) he was charged by Kawakubo and Adrian Joffe to come up with a concept. Bourgeois came immediately to mind. Freedman is nothing if not stalwart in his creative convictions. But asked if running a concept by Kawakubo gave rise to abdominal butterflies, he offered that this “may have been the most intimidating proposal” of his career. She approved the idea in short order, leaving only the Bourgeois half of the equation, which took Freedman months to broach with Gorovoy, lest a “no” kill the project.

No cause for worry, as Gorovoy was all in from the start, even though he knew little of Kawakubo, his points of contact until then no more than a heart-with-eyes T-shirt or two. “I had no hesitation really,” he said. “I mean, it was a question of just getting the right work because when you do these kinds of pairings, you really need the right work.” There were as well the typical, not insignificant fine-art concerns “about humidity and lighting and insurance and da, da, da. But those kinds of logistical things are very solvable in a strange way. I think it was more making the installation. In the end, it’s important that it’s done really at a high level, which it is, and it’s going to look fantastic. And I trusted Dennis.”

Freedman came up with the basic visual concept without knowing which works of either woman would be available. Ultimately, Kawakubo requested that he select only pieces from her last five years of collections; he could choose anything not requested by the Met’s Andrew Bolton. Gorovoy made the practical call to limit the Bourgeois selections to works owned by the estate; it would be “too complicated to borrow from a museum.”

As it turns out, there was a great deal from which to choose, including a series of sculptures literally based on clothes. Gorovoy recalled that Bourgeois was a saver, keeping clothes, some dating to her early childhood, as a sort of personal diary. “One day she just said to me, ‘Go upstairs. Bring all the clothes. Just bring everything down.’ She remembered places and people [through her clothes]: ‘Oh, I wore this to Venice,’ and ‘We were here…’ And so it brought back memories. And Louise always had this idea of writing and recording her memories. And that became really the raw material to make a whole body of sculpture.”

Asked if he thought the passing years had triggered a creative nostalgia, Gorovoy responded that Bourgeois loved her collection of clothes and couldn’t bear to think of its eventual destruction. “I think she realized, ‘These things are really important to me, and I don’t want someone just getting a dumpster and throwing all this stuff out.’ She knew if she incorporated the clothes into her works they would live well beyond her own physical presence. So it was her way of reliving the experience of them but also [ensuring] that these clothes now would not perish, would not now be discarded or rejected or thrown out. She identified with them in a way.”

Freedman wasn’t aware of Bourgeois’ sartorial preoccupation when he embarked on the project. “Louise’s relationship to clothing was fascinating and it made this whole project much more resonant. Neither one of these women was looking at the other’s work. I mean, they may have been aware of the [other’s] name, but they were not influenced by each other’s work. In curating something like this it’s fascinating. It’s almost archeological, like you’re uncovering all these facts. And the more that were uncovered just made it richer and richer.”

As I write, I haven’t seen the fully completed windows, though I have seen very faithful renderings of both up- and downtown. When I left Madison Avenue on Wednesday night, all of the pieces by both women were in place, either hanging from metal fixtures affixed to the ceiling or on standing supports, with minor positioning tweaks underway (minor a relative concept when the fixture requiring adjustment weighs 200 pounds). Barneys’ brilliant working credo “creativity in progress” had yet to be removed from any of the windows and replaced with the exhibit’s explanatory text. I stayed around long enough for the sound check. The Kawakubo-Bourgeois optics are accompanied by a recording Bourgeois made in her 90s — she sings nursery rhymes in French, including one she wrote herself. If it sounds eerie, it is, with a soupçon of charm. Yet public art has its limits. “We’re under a very strict sound ordinance,” until 7:30 pm only, Mazzucca said once Bourgeois’ elder warble became audible. “When it’s quiet, the sound bounces all the way over.” He spoke from prior experience while pointing west toward Fifth Avenue, populated by tony hotels and apartment buildings. “We make friends left and right,” he deadpanned.

As for the powerful pairings, whatever one’s degree of critical artistic aptitude, in each case, there’s an obvious visual correlation. For example, the orange dress sculpture with its long, self-belt (at least, Gorovoy thinks it was a belt) deconstructed and reconstructed into a tail is paired with a Kawakubo spring 2015 “Blood and Roses” look in startling red, crafted from countless belts, but none functioning as such.

Yet for the art guys involved, the obvious is just the beginning. Consider the protrusion motif: from Kawakubo, a bulbous red leather and fur (or is it faux?) piece from the fall 2016 “18th Century Punk” collection, and from Bourgeois, two latex Bourgeois pieces from a massive work called “Confrontation” installed at the Hamilton Gallery in 1978.

The art gentlemen’s take (lest one miss it): Sexy stuff.

Gorovoy: They’re male or female. Whatever they are, to her it was sort of neuter in a way. I mean, they look like multiple breasts, of some old, some classical thing.

Gorovoy: They are also genital. They’re sort of ambiguous, really.

Freedman: But sexual, without a doubt…really profound protrusions.…I mean, they come out of the body…there is no question that there is a sexuality, both male and female in these pieces.

As for why he chose the particular Comme des Garçons piece to pair with Bourgeois’ latex duet: “Because — there’s the eroticism, it’s very clear, these openings of fake fur and clusters.”

The latex pieces were actually worn as garments for a one-time-only performance in 1978, a parody of a fashion show. A video of the event will screen continuously through the installation. “It’s called ‘Confrontation,’ which means everyone has to confront their life in front of everyone else and be honest about who they are,” Gorovoy said. “So the audience sat inside of these, sort of coffinlike structures.”

Another point of connection for Freedman is focused on an also-bulbous Comme number, this one multiple puffs of stuffed white sheeting, each tied closed. This piece is Freedman’s own, which he ordered as an art piece from the fall 2015 collection, “Ceremony of Separation.” Perusing it through the glass, he recalled an amusing story of its arrival. (He had it shipped to Barneys.) When whoever opens such things opened it, the artful glory didn’t resonate, and he (or they) untied and rummaged through the stuffing, looking for the merch. Freedman had to ship it back to Japan for reassembly.

Earlier, Freedman articulated deeper thoughts about the piece. “One of the most extraordinary discoveries of putting this together is that Louise’s performance piece was about confrontation, and about passage of time,” he said. “There was youth, old age; there was this idea of death. ‘Ceremony of Separation’ was about these very themes. When the models crossed paths, Rei purposely narrowed the runway so they had to turn sideways and look each other in the face, [otherwise] they couldn’t get past each other, and then move on. So there’s the idea of passage of time and confrontation and loss. The parallel to Louise’s performance piece was profound, is profound.” He paired Kawakubo’s white pouf with Avenza, a brown latex pod-type creation intended to reflect, according to the window copy, “the nurturing mother,” but that also has something to do with protesting the Vietnam War. Avenza is from 1968-69.

And so went the conversation and the installation, past the mutual belts, protrusions and oraficia. A jacket from the Comme show “Monster,” fall 2014, all distorted ergonomic tubing, is juxtaposed against Bourgeois’ “Torso, Self-Portrait” in which head and torso merge; two of her “Echo” series bronze sweater castings play against Kawakubo’s “Monster” shrouds.

All heady goings on, defiantly high-minded and without any of the humor one might extract from — or project onto — Kawakubo’s work. Those of a certain age might muse on how far store display has come since Rhoda Morgenstern toiled as a window dresser. Some of any age might agree with the exiting, eye-rolling Fred’s diner. Conversely, many will find the provocation exhilarating, educational and, in its own way, fun.

Real art — and, at least some of the time, real fashion — must go “too far.” And who could argue saliently that fashion today does so often enough? Here’s to Rei Kawakubo and Barneys for their proverbial pushing of boundaries. Call it fearlessness in progress.