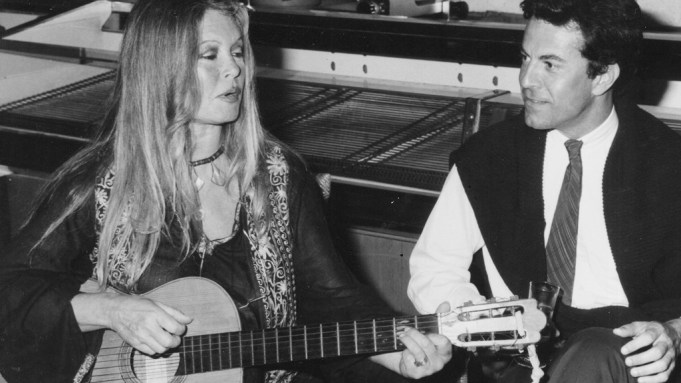 Brigitte Bardot’s influence on fashion is seeing renewed interest. The style icon, now almost 80, is an outspoken animal rights activist often criticized in the French press for her dubious political rants. But at the height of her career in the Fifties and Sixties, when she was often described as “the world’s most beautiful woman,” Bardot made the name of certain brands.

Consider dancewear brand Repetto. Before modeling and acting, Bardot trained as a ballet dancer at the Paris Opera. It was her request to Repetto’s founder Rose Repetto to make her a pair of outdoor shoes for her role in “And God Created Woman” that led to the creation of the brand’s first footwear for outdoor use — the Cendrillon model that is still a staple in its collection today.

“She was the spark that set things off,” said Jean-Marc Gaucher, Repetto’s current chief executive officer. “People wanted to have the same product as her. She became a symbol of women’s emancipation. She broke with the codes of the era.”

Bardot’s look was unusual in the pristine celebrity circles she inhabited. She often walked around barefoot, wore miniskirts to the Elysée Palace and sparked many an imitation of her falsely messy blonde locks and black cat’s eye eyeliner. Walking the streets of the world’s capitals these last few years, it is impossible not to notice that such looks are prevalent again.

Jean-Claude Jitrois, who dressed Bardot in the Eighties, describes her signature style as “chic-destroy.”

“It’s coming back,” Jitrois commented. “We are going to see those years come back in fashion. Young people like the way she said ‘merde’ to the bourgeoisie, and love the ‘And God Created Woman’ style, that certain type of elegance.”

Denim brand Seafarer was a Bardot favorite, and for its relaunch this spring, the brand stewards are using archival photos featuring the blonde bombshell to promote its revival.

A line of Brigitte Bardot ready-to-wear also continues to make inroads at retail. The Brigitte Bardot Clothing Collection was launched two years ago after the actress sold the license to her name and image to investors. Despite the overwhelming array of unendorsed Bardot merchandise that is widely available, it was the first time she signed such a license.

The conditions for using the Bardot name include no use of fur or leather and respect for the aging star’s image.

“It has a French image that can be exported internationally, which corresponds perfectly with Galeries Lafayette’s customer base,” said Pascale Camart, director of women’s buying at Galeries Lafayette, which just added the line in its regional doors and will showcase it in its Parisian flagship this fall.

“People have really stayed with the image of Brigitte Bardot in the Sixties, and not on her image today,” the brand’s creative director, Sarah Ohana, explained. “That is the image we portray, her beauty, the dream, her style, her look.”

The line mixes items like T-shirts featuring photos of Bardot with rtw inspired by her style in her heyday.

Bardot receives images of the fashion line in advance to approve Ohana’s designs. Has she ever objected to one? “No,” Ohana said. “Everything is going well.”

“We were a little apprehensive in the beginning, because some customers thought it would be a short-term trend,” Ohana admitted. “But now customers are working the brand in store like they would any full-line brand. They are not just buying the [T-shirts with] photos, they are also buying the ready-to-wear.”

“We waited to see how viable the brand would be,” Camart commented.

Brigitte Bardot Clothing Collection is now distributed to some 450 sales points worldwide, with around half of these outside France, including a strong presence in Japan. In January, the brand’s advertising was displayed across newsstands during fashion week in Paris and featured in the magazine press.