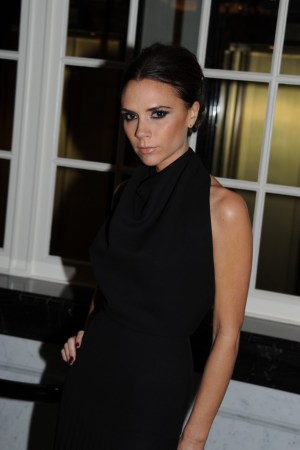 “I’m sorry, I’m so rubbish,” said a weepy Victoria Beckham as she accepted the prize for Designer Brand at the 2011 British Fashion Awards Monday night at the Savoy Theatre in London. After pulling herself together, she thanked her team, her kids and her parents for their support. Beckham, who beat out Burberry, Tom Ford and Stella McCartney, then gave her husband the biggest shout-out of all.

“Without David, I would never have had the courage to do what I did,” she said in a shaky voice.

Beckham was the only winner with a wobbly upper lip, as the ceremony — followed by dinner in the hotel’s ballroom — was a predominantly jolly affair. Guests included British First Lady Samantha Cameron, Marc Jacobs, Lady Amanda Harlech, Kate Moss, Kristen McMenamy and Kate Hudson, who made the audience giggle as she presented the Red Carpet Award to Stella McCartney. Donning a pair of black-framed spectacles and firing up her BlackBerry, where she’d stored her speech, Hudson recalled the very first McCartney design she ever wore at the Academy Awards in 2001.

“I felt like the coolest, hippest girl in the world. And I remember Stella hand-sewing the hem of the dress,” said Hudson, referring to the dusty blue beaded Chloé gown.

The following morning, hungover and with no golden statue by her bedside, Hudson remembers turning on the TV.

“I’d made every worst-dressed list known to mankind,” the actress recalled. “Later I called Stella — and we laughed our asses off. Then Stella said: ‘Let’s be honest, babe, it was the hair.’”

The usually dry Alexa Chung took a sweet turn as she accepted her people’s choice award for British Style. “This is for girls who dress like awkward boys,” she said quietly into the microphone before rushing backstage.

Alexander McQueen’s creative director, Sarah Burton, capped an action-packed 12 months, accepting her Designer of the Year Award from Cameron. “This is the icing on the cake of a really amazing year,” Burton said of the night’s top award. “I’d like to thank my team. They are my family.”

During the cocktail hour, guests were in an unusually buoyant mood. It was hard to believe they are living in a country that, by many accounts, is recession-bound.

“Business is booming,” said Philip Treacy. “The royal wedding has done wonders for hats — especially in America. And Lady Gaga is making them cool for a younger generation. Customers are seeing them as a long-term investment.”

Matthew Williamson is gearing up for his 15th anniversary in the fashion business next year — and will be marking it with a variety of projects, including a film. In the nearer future, he’s off to Lake Tahoe for Christmas. “I still can’t believe I’m going there,” he said. “I’m not about the snow — I need Ibiza and the sun.”