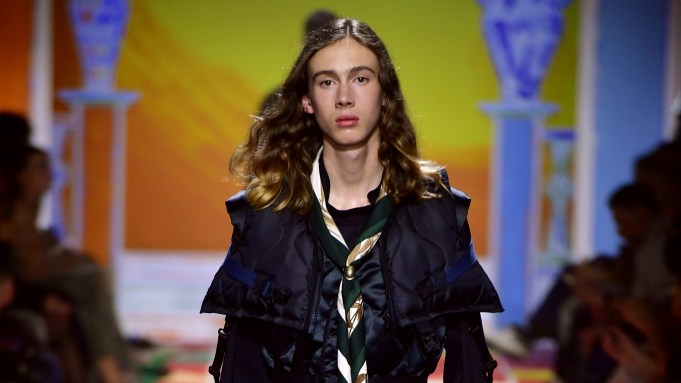 HYERES, France — British men’s wear designer Ifeanyi Okwuadi took the top prize at the 36th edition of the Hyères International Festival of Fashion and Photography on Sunday, winning over a jury headed by Louise Trotter, creative director of Lacoste, with his collection of hybrid tailoring inspired by social protest.

The 27-year-old, who apprenticed for three years on London’s famed Savile Row and later studied fashion design at Ravensbourne University in London, developed his collection in parallel to working in logistics at British label Margaret Howell. He has also interned at brands such as Grace Wales Bonner and with artist Aitor Throup.

His collection, titled “Take the Toys From the Boys,” was inspired by the Greenham Common Women’s Peace Camp, a series of camps established to protest against nuclear weapons being placed at a British air force base, which lasted from 1981 to 2000. Okwuadi said he’s been working on the topic for almost six years.

“It’s 100 percent emotive,” said the designer, whose mother is from Sierra Leone and father from Nigeria. “I think we should all take action against the things that we find horrible in this world.”

Each outfit referred to a specific aspect of the protest. There was a trenchcoat inspired by police officers’ uniforms; a sweatshirt with a wide neckline, in reference to protesters being violently evicted, and a patchwork scarf made using surplus Harris tweed and boy scout badges, inspired by artworks the women made when they disbanded the camp.

Demonstrating a confident hand, he spliced together the outfits using a variety of fabrics, from silky lining material to wools and technical fabrics, mostly sourced in the U.K.

“Britain has such a history that is just so untold,” Okwuadi told WWD, noting that British director Steve McQueen is among those tackling these topics. “He’s trying to retell the history that we have in Britain through film. I’m trying to do it through fashion and design. So I feel like there’s this consciousness that’s happening and filtering today, that’s retelling these stories.”

Despite the coronavirus pandemic, an upbeat mood reigned at the event, with participants expressing relief that the festival was back to a full physical edition, after taking place in the absence of most of the fashion jury last year.

“I never understood why the jury didn’t come last year, and I was very disappointed they didn’t come. By contrast, I’m very happy, of course, that everyone is here this year and that a lot of industry professionals also made it, even if we’re still missing people from the United States and Asia,” said Jean-Pierre Blanc, the director of the festival.

“I think this edition exudes joy and enthusiasm,” he added. “I’m not going to pretend everything’s hunky-dory, but I’m thrilled to see that the people who came are happy to be here.”

For the 10 fashion finalists, many of whom graduated from university in the midst of the coronavirus pandemic, it was an intense few days, between facing the jury, staging two fashion shows and meeting the press.

“It has been quite full-on, but I think we had a good atmosphere between all the designers, so it’s been a great experience,” said Finnish designer Sofia Ilmonen, as she caught up with fellow contestant Mateo Velazquez during a break between interviews.

“The fashion industry is really hard to break into, so for us to get this opportunity is amazing, because otherwise it would be quite difficult to reach out to some of the people that we have met,” added Velazquez, the first Colombian designer to reach the final of the competition.

Indeed, the wide range of sponsors at the festival guarantees a vast network of contacts for the young contestants, many of whom have yet to sell a collection.

The Première Vision Grand Prize comes with a grant of 20,000 euros, and visibility during a Première Vision Paris event. Okwuadi will also be given the opportunity to undertake a project with the specialty ateliers that Chanel controls through its Paraffection subsidiary, a prize valued at up to 20,000 euros.

Trotter said she was looking for a combination of an original and compelling narrative with a high level of execution. “We’re just coming out of 18 months of a pandemic. For me, where they’re really talking about something very personal to them, and going deep into their roots, I find very interesting,” she explained.

And while she values creativity, Trotter has a pragmatic approach to the clothing industry. “In the end, clothes are to be enjoyed, and I think there’s nothing more sustainable than having clothes that you want to wear repeatedly for a long time,” she explained.

Latvian knitwear designer Elina Silina was awarded the Chloé Prize, a grant of 20,000 euros created in 2012 by the fashion house, also a sponsor of the festival. Her cobwebby white dress, inspired by a vintage Karl Lagerfeld design for the French label, was made using amber thread, which she said was discovered and patented by Latvian scientists.

The Le19M Métiers d’Arts Prize in partnership with Chanel went to Thai designer Rukpong Raimaturapong, who worked with Chanel-owned milliner Maison Michel on wide-brimmed interchangeable hats in the same bright colors as his outfits.

Supima, another official partner of the festival, supported the finalists by donating fabrics including velveteen, indigo denim, white denim, jersey, shirting and twill.

“I think people really were excited to have that opportunity, because these are premium fabrics that are very hard to get a hold of in smaller quantities,” said Buxton Midyette, vice president of marketing and promotions for Supima, adding that it was stimulating to see young designers using the materials in new and different ways.

Ilmonen won the inaugural Mercedes-Benz Sustainability Prize, which rewarded the designer that best applied the advice they received during mentoring sessions with Fashion Open Studio, a nonprofit organization campaigning for a more sustainable luxury industry, on sustainable practices. The prize also comes with a grant of 20,000 euros.

Ilmonen, who worked for three years at Alexander McQueen, presented colorful modular dresses based on fabric squares that can be assembled with snap buttons, and adjusted with drawstrings.

“I think that could be a huge asset for the brand to have that closer connection with the customers, but also them having the freedom to have their own creativity in the garment. On a sustainability aspect, if you do things yourself, that can create that stronger bond between you and your clothes,” she said.

Trotter said environmental responsibility has come to be expected from young designers. “Sustainability wasn’t for me a big thing, if I’m frank, because I think it’s almost a given. I didn’t use that as a criteria. I mean, I expected it,” she said.

Shoe designer Christian Louboutin, president of the fashion accessories jury, said there was a sustainable component to almost every entry he reviewed. “It’s like a tidal wave and it’s not going anywhere. It’s not a fashion trend. It’s really a very moving social phenomenon: everyone is concerned about sustainability and our planet,” he remarked.

Louboutin said he was struck by the singular approach of the contestants.

“The most important thing is really the creative mind, and the point is not to judge people on whether they’re capable of having a terrific commercial career,” he said. “I think that when you’re starting out, you have to remain completely free, and that’s what you communicate to other people.”

In parallel with exhibitions, which will remain open to the public until Nov. 28, the festival also included fashion shows, film screenings, performances, book signings and round tables on topics like sustainable development and the challenges of fashion in Europe.

The latter brought together Pascal Morand, executive president of the Fédération de la Haute Couture et de la Mode, French fashion’s governing body, with his Italian counterpart Carlo Capasa, chairman of the Camera della Moda, and leading industry executives, who all agreed on the need to present a united European front in an increasingly competitive environment.

The Hyères festival has served as a springboard for designers including Paco Rabanne’s Julien Dossena; Viktor & Rolf’s Viktor Horsting and Rolf Snoeren; Saint Laurent’s Anthony Vaccarello, and Rushemy Botter and Lisi Herrebrugh, the founders of men’s wear label Botter, who were named artistic directors at Nina Ricci in the wake of their 2018 win.

Blanc said he hoped the fashion industry would remain open to welcoming young talents, despite growing commercial pressures. “I hope that we will keep this openness and the pleasure that we feel here in mingling, and above all, no self-segregation,” he said.