Two of London's hottest names have used lockdown to enrich their e-commerce offer: Matty Bovan is launching a new collection, while Charles Jeffrey Loverboy is selling clothing, and original artwork, on his new web site.

One of Matty Bovan's hand-painted T-shirts on a homemade scarecrow.

LONDON — Matty Bovan and Charles Jeffrey, two of the London calendar’s hottest names, have used lockdown to ramp up their respective digital offerings, with Bovan launching a clothing label that will be exclusive to his existing e-shop, and Jeffrey unveiling his first e-commerce platform.

Both initiatives come at a time when digital sales are on the upswing and designers are looking to control more of their distribution. They also want to speak directly to their customers, learn from them, and mine the data from direct sales.

Bovan’s new line, Bovan, will debut Aug. 7 on his existing e-shop. It features jersey, sweatshirt and sportswear fabrics, with the one-off pieces screenprinted and painted by hand in the designer’s native Yorkshire. 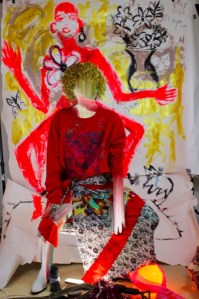 Bovan described the line as a “visual diary” of the past five months. He’s photographed himself wearing some of the pieces, and has also styled them on a handmade scarecrow mannequin. After shooting them, Bovan manipulated the images using digital oil paint.

In an interview, Bovan said it was important for him to offer his customer something different from the ready-to-wear line he shows in London. “I wanted to explore more casual pieces such as hoodies, sweatpants and tote bags — and have a range of price points, with some entry level prices.”

Plum Bovan, the designer’s mother, has created a limited capsule of earrings, necklaces and brooches to go with the collection. She also designs the jewelry for her son’s runway shows.

Prices range from 35 pounds for a tote bag, to 275 pounds for a hand-painted dress. Printed white T-shirts cost 85 pounds, while a painted sweatshirt is priced at 165 pounds. The collection is full of Bovan’s vibrant clashes of color and texture, and his cartoonish cat-pig signature motif. 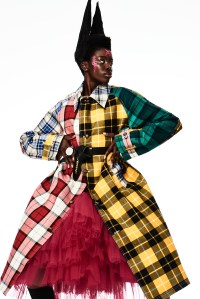 Bovan said he had planned to unveil the collection pre-COVID-19, and lockdown gave him even more inspiration: He has spent much of his spring and summer alone, working from his home in York, painting the pieces and photographing them.

“I really enjoyed the process, it was an escape, and I have always wanted to give the customer a bit more. I wouldn’t really put a sweatshirt down the runway.”

Bovan added that the screenprinters he works with in Yorkshire remained open throughout, so producing the collection wasn’t as difficult as it could have been.

Bovan was also one of the recipients of the COVID-19 Fashion Fund, which the British Fashion Council hastily put together a few weeks after lockdown. 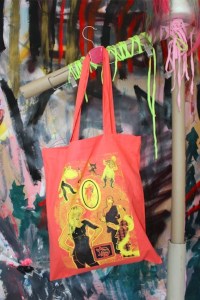 In May, 37 designers were selected from more than 200 applications for the fund. Each brand received up to 50,000 pounds, as well as access to business support and mentoring from BFC partners including Farfetch, Eco-Age, YouTube, Instagram, Google and Value Retail.

Jeffrey, another recipient of the fund, launched his first e-commerce platform in late July, selling archive and new collection pieces, as well as his own original artwork and exclusive styles.

It’s hosted by virtual shopkeeper called Hamish, a Scottish punk, while the feel of the site was inspired by a video game. As a child, Jeffrey had aspired to be a game designer.

Exclusive prints are available to buy on the site, the first time that Jeffrey’s artwork has been sold to the public, outside of private commissions.

Similar to Bovan, Jeffrey said he wanted to appeal to a wider audience, and offer a lower price point, so there is also a selection of jersey, sweats, key rings and accessories that are exclusive to the site. 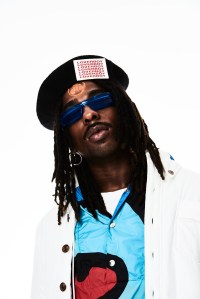 “The decision to launch a direct-to-consumer site was a fairly intuitive one. We’ve been working on this site build since the beginning of the year — and to be honest, while it didn’t necessarily speed up the process, I do think that lockdown made the end result better,” said the designer.

“We saw it originally as a bit of a summer facelift; but it’s become something much bigger. We knew it would be massively useful to get direct, first insight into what your audience wants to engage with, and buy. Instagram allows for a lot of that, and we do spend a lot of time tracking and analyzing stuff.”

Jeffrey said that he and his team speak to their stores every week about what’s doing well, “but there’s a lot to be gained from being able to take a closer look at the part of our audience” that will shop on Loverboy.net. 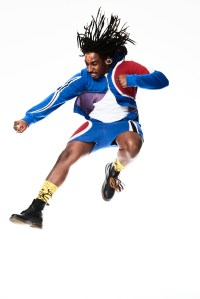 The designer said he sees the site as a testing ground for new ideas, and a way to revisit old favorites and see how they perform.

According to the company, sales on Loverboy.net are tracking 70 percent higher than originally projected without any sponsored posts or other digital marketing.

Best-selling categories are jewelry, logo knitwear and artwork. The vast majority of users are visiting the site for the first time, and best-selling territories are the U.K., U.S., Japan and Australia, according to the company.