At first glance, housing for the homeless and mentally ill and the fashion antics of the runway have little, if anything, in common. 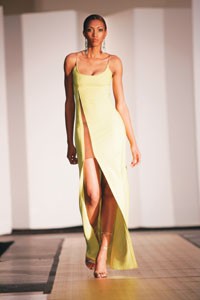 NEW YORK — At first glance, housing for the homeless and mentally ill and the fashion antics of the runway have little, if anything, in common. Doris Clark, executive director of Brooklyn Community Housing & Services, however, saw otherwise, and in 2003, started a multidesigner fashion show that features the borough’s homegrown design talent while benefiting the BCHS cause.

“It’s an uncommon alliance between community housing and the creative community,” Clark said May 17 at the third annual Fashion in Fulton & Friends evening soiree. “But it’s a dynamic alliance,” she added.

More than 300 guests gathered at the Beaux Arts Court at the Brooklyn Museum for an evening that was part silent auction, part fashion extravaganza. Clark herself, a 23-year veteran of the organization who retires this June, was feted for her contributions, as was Eric Deutsch, president and chief executive officer of the Brooklyn Navy Yard, whose corporate tenants provide jobs for thousands of Brooklynites. But, for all the accolades heaped on the two, it was the 12 featured designers to which the night belonged.

Cassandra Bromfield kicked off the showcase with her patchwork tie-dyed gowns, voluminous tulle-heavy confections that paired Cinderella pouf with handcrafted crochet tops or blazers trimmed with lace. Roger Gary looked to the other end of the eveningwear spectrum with body-skimming garments, generous in their skin-baring cutouts and thigh-high slits, while Courtney Washington took a Morticia Addams bent, with various crimson dresses covered in black lace, from curvy floor-sweeping numbers to a bouncing Fifties frock.

“Brooklyn is a borough of neighborhoods,” said Clark, who herself walked the catwalk in a patchwork brocade coat by Tribal Truths. “And the function of the [Fashion in Fulton & Friends] is to show them to new neighbors.”

This story first appeared in the May 26, 2005 issue of WWD. Subscribe Today.
load comments
blog comments powered by Disqus