Ines de la Fressange was also in town for a cocktail party at the French Embassy that toasted "Roger Vivier," a book published by Rizzoli New York. 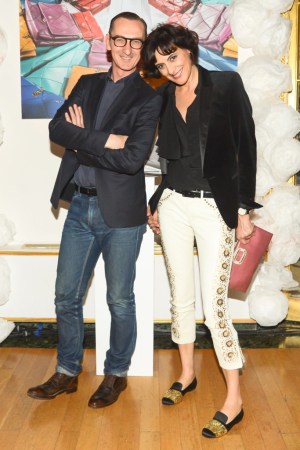 “I can judge what I do by seeing the image in the mirror because it gives you a distance,” Frisoni said of the reflective surface that only runs along the bottom portion of his office wall. The designer described his office during a Fashion Institute of Technology Fashion Conversation last week, seated alongside brand ambassador Inès de la Fressange and director and chief curator of The Museum at FIT Valerie Steele.

Frisoni and de la Fressange were also in town for a cocktail party at the French Embassy that toasted “Roger Vivier,” a book published by Rizzoli New York that came out earlier this month at the French Embassy here. Karen Elson performed at the fete, which was DJ’d by Harley Viera-Newton and attended by the likes of Tabitha Simmons, Charlotte Sarkozy, Olivier Theyskens, Coco Rocha and Anh Duong. Frisoni signed copies of the book, available at all 14 freestanding Roger Vivier doors, as well as select bookstores worldwide.

Since his appointment at the creative helm of the French footwear brand a decade ago (also when it was acquired by Diego Della Valle), Frisoni has reinterpreted many of the iconic shoes — such as the buckle pump Catherine Deneuve wore in “Belle de Jour.”

“I redesigned it [the buckle shoe] because I thought it was looking a bit retro,” Frisoni said to a packed house at FIT, noting that when it comes to pumps, a straight heel with movement — a Vivier signature — is “always right.”

De la Fressange interjected: “Everybody is doing pumps, but the quality of the leather and the shape make the whole difference.”

This year has also seen the reintroduction of the comma shaped heel, first designed by Vivier in 1963 when he left Dior. For the 50-year-old style’s relaunch, Frisoni created limited-edition versions with the original 7-cm. heel in mink and embroidered satin, as well as a higher, 10-cm. heel in fabrications, such as silver mirror leather, satin and houndstooth.

Frisoni praised Vivier for his sense of awareness — and how advanced he was design-wise for his time — as Vivier received as much acclaim for intricately embroidered medieval shoes as he did for over-the-knee Kinky boots worn by Brigitte Bardot. He was also the first named designer to work with the house of Dior in the Fifties and has been dressing royals for decades.