Creative director Max Kibardin drew upon various references and whipped them all into a smart collection. 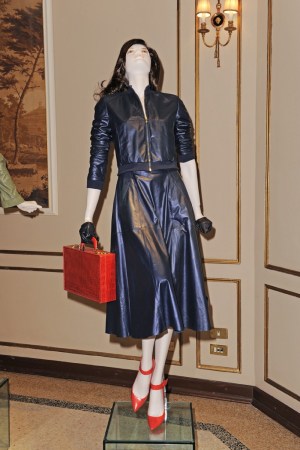 In his sophomore effort for Bruno Magli, creative director Max Kibardin drew upon various references — Seventies colors, military themes, the films “To Catch a Thief” and “Zabriskie Point” — and whipped them all into a smart collection.

To help convey a sexier image for the house, the designer collaborated with American photographer Karen Collins on a semierotic film called “603,” which was shown throughout the presentation.

The accessories were tame in comparison to the racy flick. There were simple sandals in mauve suede with a chunky heel and a leather ankle cuff style, while Mary Jane pumps came in bright orange leather. Bags included a military-inspired duffel, structured calfskin briefcase bags and boxy suede clutches.

The clothes (shrunken bomber jackets, full skirts and peasant dresses all worked in leather and suede) and much of the accessories were shown on mannequins arranged in an arty setup meant to mimic Collins’ Seventies photos.