NEW YORK — Designers of buildings and those of dresses have historically tended to view one another with a skeptical eye, but the hierarchy of artistic creation has finally begun to break down, as evidenced by architect Richard Meier’s... 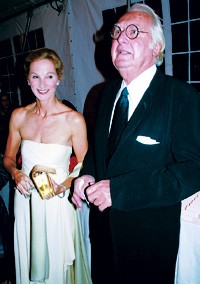 NEW YORK — Designers of buildings and those of dresses have historically tended to view one another with a skeptical eye, but the hierarchy of artistic creation has finally begun to break down, as evidenced by architect Richard Meier’s latest work: a tote bag.

Although he typically works with enameled panels and glass, Meier designed a quilted nylon bag with leather handles — in a white or black version — for guests of the Cooper-Hewitt National Design Awards held this week, working with Reed Krakoff, president and executive creative director of Coach, which sponsored the event.

The bag that resulted from the collaboration was appropriately simple and stark in its design, reflecting Meier’s buildings. Yet the process was more complicated than either Meier or Krakoff had expected, with materials and prototypes passing back and forth between the designers all summer, Krakoff recalled.

“It took a while, actually,” said Krakoff who, as a board member of the Smithsonian Institution’s Cooper-Hewitt National Design Museum, has been pushing for fashion’s recognition within the bigger realm of design.

“This helps communicate the fact that the fashion industry is full of people who love design of all types,” Krakoff said. “Design is not just about fashion; it’s a universal language.”

For the second year, the event included a National Design Award for fashion, which was given to Yeohlee Teng, who topped Marc Jacobs and Narciso Rodriguez in that category. Teng had earlier found herself surrounded by a well-wishing range of architects and product designers.

“It’s less superficial here,” she said. “But I’m a designer first. Fashion is what I do — it’s my medium. There are lots of other things that interest me — chairs, for example. Chairs are the opposite of clothes. They support the body in another way.”

Another award winner, Yves Béhar for product design, has occasionally taken the opposite route, dabbling in fashion in addition to his work creating earpieces for mobile phones. He has designed shoes for Birkenstock and a sweater for Lutz & Patmos, demonstrating a versatility of fields that is becoming quite respectable in the greater design community.