Jay-Z and his peers have often made the best models for the Rocawear campaigns. 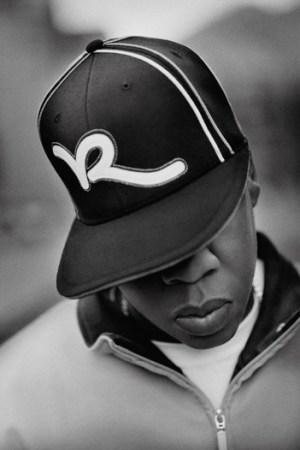 Like many fashion labels, Rocawear didn’t immediately begin advertising when it launched. Unlike most brands, it really didn’t need to.

The man behind Rocawear, Shawn “Jay-Z” Carter, was a walking advertisement for the brand. He was photographed wearing clothing from Rocawear by the tabloids and seen at public appearances, and the label quickly caught on with fans. He elevated it further by wearing Rocawear in his music videos.

Wanting to emulate their hero, fans picked up the clothing they saw on videos on MTV and BET, as well as those worn by fellow artists at Roc-A-Fella Records.

“He was the best advertisement we could ever hope for,” said Jameel Spencer, chief marketing officer of Iconix Brand Group. “He started this brand off the success of the record label, and early on, we had so many priceless moments that advertising couldn’t provide. People believed in what he was doing musically, and it lent a level of authenticity when he appeared in the videos.”

After experiencing initial success within the hip-hop community, Rocawear branched out and began advertising a little over a year after launching. At the time, Spencer said he was working at competitor Sean John, yet couldn’t help but notice some of the earlier Rocawear campaigns, one in particular that featured a shirtless model with a tattoo wearing a Roc-AFella chain. And when the brand installed a huge billboard of Naomi Campbell right outside the Sean John offices, he said he knew it would be a game-changer for how people would perceive the brand.

“I felt like they were on to something,” he said. “And I thought maybe it was time to go work for the other team. I mean, [the Campbell ad] was audacious and personally aimed at [Sean John]. They were bringing a different perspective to fashion. It was a very unapologetic attitude.”

Since about 2001, Rocawear’s ad campaigns have evolved enormously, to emulate more of a true lifestyle brand. “Now the brand is smart and articulating and communicating [Carter’s] vision,” said Spencer. “He wouldn’t wear it if he didn’t like it. We’ve been inspired by his evolving sense of style. We are not selling clothing. We are selling a lifestyle. And the story hasn’t all been told yet.”

The label has shot big names for its campaigns, including Campbell, Karolina Kurkova, Kanye West, Joy Bryant, Zoe Saldana and Victoria Beckham. Spencer said traditionally, Rocawear doesn’t set aside large budgets for ad campaigns, but there have been big moments. For instance, it ran approximately 15 ad pages in one issue of Vanity Fair a few years ago, featuring Kevin Bacon, Campbell and Kurkova as seen through the lens of Mario Testino, in which Bacon and Campbell are pictured in the back of a limousine. In another image, Kurkova is dancing in a nightclub.

“We spent a lot of money on the campaign, but it caught people’s attention and had them talking,” Spencer remarked.

Photographer Mark Seliger has been a regular behind the lens for Rocawear campaigns, often traveling with Carter all over the world for the right images. They were in South Africa a few years ago, where Seliger followed the hip-hop artist during his trip with MTV and the United Nations, where he created a video diary that looked at the global water crisis affecting tens of thousands of children each year. Seliger photographed the rap star as local children followed him around their villages.

“It was a Muhammad Ali type of moment,” said Spencer. “There were 400 kids surrounding him.”

“He was larger than life to them,” Seliger recalled.

In 2005, Vibe magazine ran a 24-page insert in its September fall fashion issue for a campaign shot by Seliger, called “We run the strip.” It was a clear example of Carter taking on the brand, in a more hands-on way, while keeping the label aspirational, but also maintaining its credibility. A few seasons later, Seliger shot new spokesmodel Ciara in a campaign titled, “I will not lose,” which featured video testimonials of people overcoming adversity, such as a newspaper editor from Virginia Tech after a campus shoot-out in 2007 that left 32 dead and dozens wounded.

All of the campaigns that have run during the past decade or so are on display at the company’s headquarters in Midtown, in a newly installed Rocawear Museum. Famous shots of actress Saldana and Jaime King from 2006 are exhibited, as well as images of Carter that were captured last year, while he was a headliner at the Glastonbury Festival. He brought actress Bryant along and turned the trip into an ad campaign that ran in 2008.

For the label’s 10th anniversary, Rocawear had several things planned, including its first television commercial, directed by Spike Lee. It was shot in a penthouse apartment in Brooklyn’s Clock Tower Building at 1 Main Street. The ad has been edited to a five-minute short that was shown on BET and afterward, MTV. A series of print ads is also in the mix, featuring Rocawear faces of seasons past. Seliger shot individual portraits of Carter, Bryant, models Omahyra Mota, Ana Beatriz, Jessica White and rapper Memphis Bleek, among others.

“Working with Jay is a very personal experience,” said Seliger. “He’s very hands-on and comes to shoots with great ideas. And his confidence in me allows me to do what I do best. We are always reinventing every season, and he’s always pushing it further. There’s really no limit on his creativity. It will be interesting to see what happens next.”