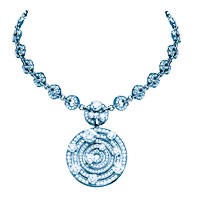 ST. PETERSBURG, Russia — There is still the occasional snow squall here, but the biggest ice seen recently was Bulgari’s unveiling Wednesday of its new line of diamond jewelry.

Leaving behind the glow of its native Roman sun, the jeweler chose Russia’s canaled city to present the collection, called Astrale. Most of the line’s rings, bracelets and pendants feature concentric circle patterns of white gold and pavé diamonds.

The collection should help boost Bulgari’s profile in the increasingly important Russian market. Luxury brands from Louis Vuitton to Burberry are rushing in to capitalize on the growing wealth of the Russian consumer, who more and more prefers to shop at home rather than abroad. Milan-based consulting firm Pambianco has estimated the Russian luxury goods market already is worth more than $1 billion — and expanding fast.

“This is part of a broader, more comprehensive project to extend our product range and compete in a market that is much more competitive than that of the 1990s,” Bulgari chief executive officer Francesco Trapani said in an interview.

Astrale is a logical follow-up to the technicolor offerings of past collections like Allegra, said Trapani, adding, “We needed more of a presence in white gold, diamonds and pavé.”

While white gold and diamonds predominate, there are a few exceptions. Several pieces also are available in yellow gold. A choker necklace and matching bracelet feature stingray leather straps. In a departure from the circular pattern, several items connect rectangles of pavé diamonds and gold spheres in a sort of deconstructed molecular-type formation.

Prices range from about $900 for a simple gold piece to approximately $2 million for a one-of-a-kind ring featuring three rare diamonds in pink, blue and yellow.

Bulgari presented the jewelry as part of a fashion show and dinner held at a huge, frescoed neoclassical palace, which was owned by Catherine the Great, filled with gold leaf, chandeliers, columns and statues on the outskirts of St. Petersburg — where it did, in fact, snow. The show featured gowns and other eveningwear from names such as Givenchy, Oscar de la Renta and Hedi Slimane. Just for the occasion, Bulgari and Valentino teamed up to craft a diamond pavé halter that cascades over an ankle-length black chiffon gown.

Trapani said that these top-tier, one-of-a-kind items represent a relatively small slice of the company’s revenue, but they play an important role in defining Bulgari’s image. He also said that the market for these multimillion dollar pieces is growing rapidly — the superrich are relatively immune to macroeconomic swings.

As for the next products on Bulgari’s design table, Trapani said it is too early for details. But he said that the company is focusing on the upcoming Basel Watch Fair, where Bulgari will roll out a varied selection of timepieces, ranging from sporty models to dressier jeweled ones.

New products could help drive Bulgari’s sales, which have slowed over the past few years. As the top line suffered in challenging market conditions, the company focused its efforts on cost-cutting and boosting efficiencies to increase profitability.

“We are very satisfied with our results from last year,” Trapani said, forecasting “high single-digit sales growth” for 2004. He said that sales trends in the first months of the year have been encouraging, especially those in the U.S. and Asia.

Trapani said that Europe is still suffering from weak tourist flows but that Bulgari is reaching out to local customers in those markets to partially offset the phenomenon. While the Madrid train bombing hit sales in that city, Trapani said he hasn’t seen an immediate spillover effect in other European countries.

“Perhaps people are getting more used to living in this type of environment,” he said.