Bum Equipment is reinvigorating its image with an advertising campaign featuring modern people in retro scenes. 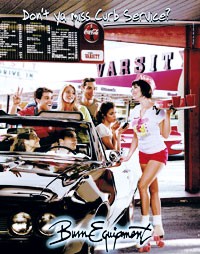 NEW YORK — Bum Equipment is trading on its popularity in the Eighties and reinvigorating its image with an ad campaign featuring modern people in retro scenes.

“We wanted to bring everything up-to-date, give it a little bit of a facelift and bring it in line with what’s going on in the marketplace,” said Stephen Wayne, chairman of Bum and SOS Management, which owns a majority interest in Bum.

Wayne, along with vice chairman Steve Marra, first started working with the brand in 1997 after Chauvin International, the company that owned it, went into bankruptcy; they ultimately bought the name in December 2002. This is the first Bum ad campaign since the pair took over ownership.

SOS also manages a number of other brands, such as Gene Meyer and American Exchange. The Bum brand appears on various categories of licensed product, including women’s and children’s apparel and accessories. In all, there are more than 20 licenses for the brand worldwide, a presence the company is looking to expand.

The campaign, entitled “Things you miss,” serves up a range of retro fare including drive-ins, boardwalks and roller skates, with tag lines such as “Don’t ya miss soda shops?”

The shots will fill about $1 million worth of print media, starting with American Idol magazine next Tuesday. Bum ads will also grace the pages of magazines such as Seventeen, Cosmopolitan, Lucky and Marie Claire this year.

It won’t just be professional models who get exposure with the ads, which were produced and shot by Jim Hancock Productions in conjunction with Bum’s in-house advertising. Children of Bum employees also took their turns in front of the camera.

Wayne noted that there has been a resurgence of Eighties fashion brands, which the marketing plays to.

“We are an Eighties retro brand so it made a lot of sense,” he said. “We have a very highly visible brand.”

Marketed to moderately priced stores such as ShopKo, Target and Wal-Mart (which owns the Bum name in Canada), the brand pulls in annual wholesale volume of about $400 million.