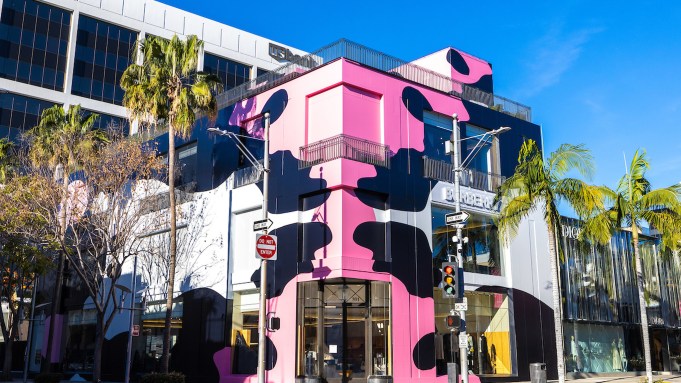 As Los Angeles readies for the Super Bowl and the Frieze Art fair, Burberry is going wild, taking over its Rodeo Drive flagship in Beverly Hills with a fashion menagerie based upon Riccardo Tisci’s spring 2022 womenswear collection “Animal Instinct.”

The timing is right for other reasons, too: the days are getting longer and warmer (at least in Los Angeles) and some people are ready to rub shoulders, raise a glass and even shop from a live runway.

Burberry is hoping to capture that desire with an in-store installation that opens Thursday and a series of live, and online, events for customers, including 100 VIPs who the company has invited from across the Americas region, including the U.S., Brazil and Mexico.

The IRL activation begins outside the store doors — on the corner of Dayton Way — with a new, vibrant storefront. Covering the shop’s entire exterior, it’s been reimagined in “bubble gum” pink and white with mirrored black ink blots. It’s the animal print motif of look 52 that closed the spring show.

Inside, front and center, a large and gleaming silver mountain-shaped piece immediately catches the eye. It holds accessories, displaying the latest handbags and footwear.

Shimmering in the backdrop — sitting tall and wrapped by the store’s three-level staircase — is a giant work of art, plastered with reflective mirrors and adorned with speakers. Both creations are references to the fashion show’s production and design, and offer a glimpse into Tisci’s vision for spring.

In his spring 2022 show film, Tisci had Burberry models walk through five distinctive spaces: a sparkle-filled urban-meets-nature landscape, a cubic room enclosed with flattened trenchcoats, a hall of mirrors embellished with speakers, a hair-blowing wind tunnel and a darkly lit rave.

The show, plus an added immersive soundtrack, plays on loop in a pop-up screening room located on the store’s top floor that’s typically used for VIP fittings and events.

“To me, this presentation really represents the freedom of our imaginations: how we dream to come alive,” reveals Tisci in a piece of text shown at the beginning of the film.

“I wanted to move through a series of immersive spaces, each of them unique and unexpected in their sound, texture and experience. It’s that idea of flicking between the endless realities and fantasies we have at our fingertips each day.”

The designer dedicated the collection to his mother Elmerinda, a longtime inspiration, who died last year.

The collection, which made its debut in September at the end of Milan Fashion Week, saw Tisci flex his creative brawn, rip apart and rebuild the trench and the check, and create abstract animal prints shaped like paper cutouts and hats with pricked up feline ears.

He took the stripes from the check pattern — beige, black, white and red — broke them apart, added pink and yellow, and shaped them into graphic animal spot placement prints for fringed minis, liquid gowns and sweet shirtdresses with streamers.

Visitors to the L.A. store are invited to see — and buy — pieces from the collection, as well as discover the activation in-store. Burberry plans to release two playful, digital AR filters for the experience. One will be accessible in-store only via a QR code, while the other will be more widely available online.

The takeover is unfurling as L.A. revs up for the Super Bowl on Sunday and Frieze Art Fair, which runs from Feb. 17 to 20.

In an interview, Thibaut Perrin-Faivre, Burberry’s president of the Americas, said the company is preparing “a one-month drumbeat of events” in L.A., including DJ parties, rooftop dinners for clients and influencers, and art-themed in-conversations related to Frieze and various art events.

The 100 special clients have been invited to separate runway events set for Feb. 15 to 17. The events will take place on the rooftop of the store, where the brand will be pre-selling the spring 2022 collection.

“After a couple of years of digital shows, we really wanted to bring the reality of Riccardo’s collections to the consumers. This is really a celebration of freedom of imagination, infinite possibilities, a blending of fantasy and reality,” said Perrin-Faivre.

He added that physical stores are becoming hot once again, with foot traffic higher this year compared with last. “People want to be connected, they want to touch, feel, and see the product. After all those months of being locked down, people really want to have these experiences.”

Burberry is riding a new momentum in the U.S. that began emerging during the pandemic, and in the immediate aftermath.

The brand has been attracting a new, younger — and male — customer base and seeing serious sales traction in cities including Detroit, Atlanta and Houston.

In the third fiscal quarter, the U.S. rivaled China, Burberry’s single-biggest market, as one of the most dynamic regions for growth at full price. As reported, the company has been axing seasonal sales and markdowns and encouraging its customers to buy right away — or lose out.

Last month Burberry said the Americas region overall saw “continued strong performance” in the third quarter with full-price comparable store sales up 72 percent compared with two years ago, driven by those new customers. Shoes and leather goods have been among the top-selling products.

In the three months to Dec. 25, Burberry’s overall retail revenue rose 5 percent to 723 million pounds. At constant exchange, growth in the three-month period was 8 percent.

Perrin-Faivre said Burberry’s new, young customers love an in-store experience and flip easily between online and offline shopping. That’s one reason why the Rodeo Drive experience will have an online element, with AR activities, and burberry.com will also have a page dedicated to Rodeo Drive.

He added that, at Burberry, “both channels are benefiting from one another. And the more seamless experience we can offer the client, the more receptive that will be.”

Those customers are also happy to pay full price.