NEW YORK — Burton Snowboards hit Manhattan with a fashion show and giant bash at Avalon on Oct. 5, and a reception the following night at Milk Studios for the new Burton-sponsored exhibit “Rides of Passage.” 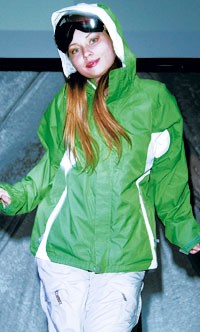 NEW YORK — Burton Snowboards hit Manhattan with a fashion show and giant bash at Avalon on Oct. 5, and a reception the following night at Milk Studios for the new Burton-sponsored exhibit “Rides of Passage.”

“The fashion show was an opportunity to show off our new looks,” noted Chris Bernard, Burton’s territory manager for New York City, who said the Manhattan event was a first for the brand. The party kicked off the North American leg of Burton’s World Tour, during which its sponsored riders travel around the globe to meet press and consumers. More than 1,000 revelers packed into Avalon, and the spirited fashion show featured models strutting and dancing down the mini-runway as pulsing music blared in the background.

Meanwhile, the Milk Studios exhibit showcased 125 Burton snowboards that have been painted, carved and sculpted by tattoo, graffiti and other artists, including Stash, Futura, Filip Leu, Adrian Lee and Jime Litwalk. The exhibit was up until Sunday, and now will travel to venues in L.A. and Japan.

“This the first time we have done anything like this, and it’s a new way for people to think about Burton,” noted Liam Griffin, the company’s manager of events and entertainment marketing. The boards are on sale for about $500 to $5,000. “We didn’t give the artists any direction,” he added. “These are all one-of-a-kind art pieces.”