The New York collections this month weren’t awash in knitwear for spring, but buyers saw some looks that stirred their interest. 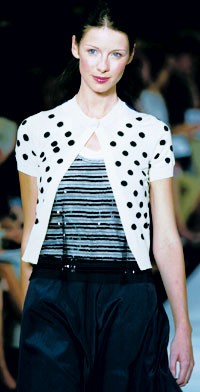 NEW YORK — The New York collections this month weren’t awash in knitwear for spring, but buyers saw some looks that stirred their interest.

“The knits in many of the spring collections make a lot of sense,” said Sue Patneaude, Nordstrom’s executive vice president of designer apparel. “We often go into spring with too much linen, cotton and sleeveless, so we like this category, especially for the early deliveries.”

Patneaude singled out white crocheted looks from Oscar de la Renta and Michael Kors as “fresh and salable,” and Marc Jacobs’ polkadot and stripe cardigans as fun “alternatives to a jacket.”

Color and trimming along with beading and other decorations will be key for spring, said Kathy Bradley-Riley, senior vice president of merchandising at The Doneger Group consulting firm.

“Most of the knitwear had some kind of visual novelty detail,” said Bradley-Riley, citing capes, shrugs and vintage cardigans as important styles.

There were also some good knit bottoms on the runways.

“Zac Posen did a really amazing knit skirt that’s like a pencil skirt right below the knee,” said Meital Grantz, owner of Talulah G in Las Vegas, describing the look as “very sexy.”

“It’s difficult to look good in knitwear,” Grantz said. “You have to be really thin.”

Still, the center of gravity in designer knitwear does not rest in New York.

Janet Brown, owner of the eponymous boutique in Port Washington, N.Y., said many of the best knit looks for the season will be found at the European collections that began this week in London.

“The American collections are not as geared to sweaters,” Brown said. “They’re more geared to sportswear and eveningwear. If I had to depend on America for knitwear, I think that I’d open maybe a little restaurant.”