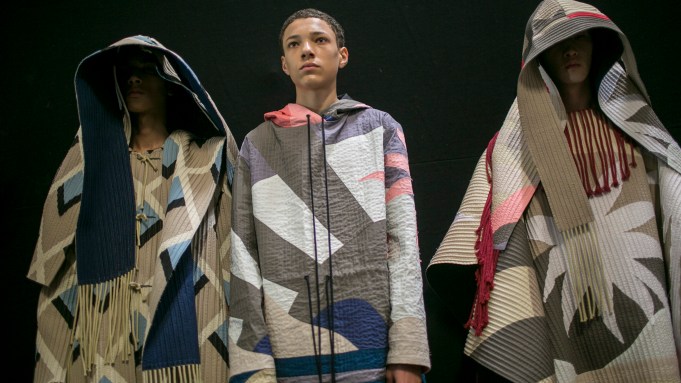 Nick Wooster, the newly appointed fashion director for Forty Five Ten in Dallas, said: “London is still incredibly relevant, especially because the city is one of the great retail destinations in the world. Hostem is one of the most important and beautiful stores in the world. And Dover Street Market is unrivaled from a display and merchandising point of view. There are magazine stands with incredible publications on every corner. It is the perfect way to kick off the season.”

But he pointed out that men’s wear in general “is going through a bit of an existential crisis right now in every city, except Paris.”

“We will have to see where it all lands, [and] I still don’t understand why the women’s shows don’t move to the men’s calendar. But for now, the easier schedule means there is more time for stores and museums.” He added that the recent attacks that struck England, and London in particular, only strengthened his desire to be here.

Wooster was reluctant to discuss trends. “Trends are not the point today or certainly here in London,” he said, adding: “Everyone did what they do best. Craig Green knocked it out of the park by presenting a collection that was inventive, colorful and truly unique. Grace Wales Bonner showed a thought-provoking, beautifully cast show that brought to mind James Baldwin and the Seventies. It was both minimal and desirable. Charles Jeffrey was the injection of energy that only a place like London can provide. And Christopher Raeburn had a fantastic show that combined two of my favorite things: military and fluorescent orange.”

All is all, he concluded, “much like current events, London is a mirror of the times — definitely some uncertainty but glimpses of hope and vitality. London [is] one of the most inspiring and creative cities on the planet.”

Mr Porter buying director Fiona Firth said there was an air of positive energy and unification with British emerging talent shining through. Firth said she liked Craig Green’s “eccentric looks,” which “provided intrigue and excitement.” Oliver Spencer continued to design “exceptional collections for the everyday man and this season put his stamp on London with ‘Love Town’ slogan T-shirts,” she said. Kent & Curwen sent a strong range of washed rugby shirts, preppy tailoring and casuals that created a club feel throughout, Firth added.

“As a city, London always showcases its creativity through its style,” Firth said. “Whether through the shows and presentations at LFWM, street style or walking down the iconic Savile Row — it’s certainly not afraid to show its feelings. London is a hotbed for young, emerging talent, and has produced some of the world’s greatest fashion designers from Alexander McQueen to Stella McCartney, with Craig Green certainly taking the reins.”

Machine-A buying director Stavros Karelis said London is all about emerging designers. “Regardless if big brands choose to show here or not, that doesn’t affect the importance to be here,” Karelis said. “Everyone knows what is important in the fashion industry, is to see the trends and what is cool and nothing is more cool than what is happening in London at the moment. Yes, you can check the big brands, but what is more exciting is to see what these emerging designers are doing because they are the ones that everybody wants to wear and follow.”

He gave kudos to Martine Rose and Craig Green. “Martine offered a show like no other in a climbing center at Tottenham Hale,” Karelis said. “It’s in an area very far away from Central London that made the fashion industry take the time and travel and go and see the show. And she didn’t disappoint anyone; brilliant balance between tailoring and sportswear, ultra modern, chic and easy, a perfect example of what a talented designer with clear vision is about. Similarly, Craig Green did a show in the Arches that helped to showcase his wonderful collection in the most serene way — offering beautiful prints.”

In terms of new labels, he touted the graduates of Central Saint Martins and Royal College of Art and praised A-Cold-Wall and Kiko Kostadinov’s collection, calling the latter “absolutely amazing.”

“I think that there is a disruptive spirit that is encouraged and celebrated at London Fashion Week Men’s,” Paul said. “Look at a show such as Charles Jeffrey Loverboy or Man — both of these bristled with infectious energy and there was a great atmosphere which you don’t really have in any other fashion capital. The lack of big names actually means that there is more focus on younger designers such as Craig Green and this can only be a positive thing. At other fashion weeks they have, at times, really struggled to spotlight emerging designers.”

He called Martine Rose “authentic” and said she has built on her success from last season with her oversize anoraks and cycling shorts. He noted that Craig Green has built on his aesthetic “in a very strong” way with “his brilliant use of print, evoking a nomadic spirit and tempered with brilliantly wearable pieces.” He said Cottweiler “drew on their strength with fabric, redefining luxury sportswear.”

He pointed to Kiko Kostadinov and Nicholas Daley as interesting names to watch.

David Aquilina, head of men’s wear at Harvey Nichols, found LFWM to be a diverse week and said it’s a time to visually experience a brand’s identity.

He pointed to Oliver Spencer, Band of Outsiders, Maison Mihara and Craig Green as particular highlights. He described Craig Green as “simply brilliant,” and said it is nice to see the designer defining himself. “Although commercially the show collection may not be for everyone,” Aquilina said. “Green is a talent and I am personally looking forward to seeing how he expands on this range in the showroom.”

From a theatrical view he pointed to Band of Outsiders and “their unique presentation,” which included four comedians. He said the consistency of Oliver Spencer should not be overlooked and noted that Blood Brother left him with a big impression.

Maison Mihara’s aesthetic will resonate with his customers, added Aquilina. “The styling, use of proportion and layering offered a visually exciting collection that worked equally well as full looks but can also be worn as separates, too. The whole collection was very considered and the ‘parental advisory’ prints and general undertone and messaging used throughout felt really relevant.

“London is a key event for us,” Aquilina said. “It’s where we are able to find the homegrown talent that we’re always keen to support. It also marks the beginning of the men’s wear show season, so you get a real sense of the direction and flavor for the trends that will emerge over the coming events.”

Dean Cook, men’s wear buying manager at Brownsfashion.com, said some fashion show venues were located in unexpected places and kept things interesting. “Our team enjoyed venturing to parts of the city that aren’t typically on the fashion road map,” Cook said. “Take Martine Rose, for example, who showed in Tottenham and Edward Crutchley, who opted for Ironmongers’ Hall — the ideal backdrop to his collection.”

“What is clear from the city’s response to these terrible attacks is how resilient London really is,” Cook said. “Londoners can’t and won’t be stopped because of the deplorable acts of a few individuals. Our decision to attend the shows wasn’t affected. In fact, we felt proud to celebrate the creativity and design talent this season in particular.

“As a fashion capital, London is extremely important,” he added. “It is home to the most respected design schools in the world, and it’s crucial that we celebrate and showcase the work of these young and emerging designers. You see real creativity here and we’re very committed to supporting that.”

Bosse Myhr, men’s wear director at Selfridges, said this season, the creative and defiant spirit of London was unmistakable. “Highlights included the irrepressible showmanship of Charles Jeffrey Loverboy and the Man designers [like Art School and Per Götessen],” Myhr said. “They treated us to truly impressive spectacles, beyond the parameters we have come to expect from traditional fashion shows. It was so refreshing to see a host of young creatives presenting their vision to the world with such joy and fun.

“London has become such an important part of the men’s wear market in recent years,” he added, “with the likes of Jonathan Anderson, Craig Green and Kim Jones proving that we really do nurture some of the best talent in the world. London has never really been about big names, or large advertisers. People come here for the creativity and the ideas and this season London Fashion Week Men’s delivered all that and then some.”