Buyers shopping for premium denim at this week's Project and Blue trade shows in New York made it clear that the days of testing every new brand were over. 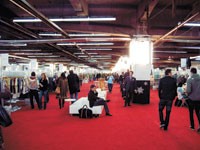 Buyers shopping for premium denim at this week’s Project and Blue trade shows in New York made it clear that the days of testing every new brand were over.

Brand representatives found buyers’ interest and confidence in premium denim to drive sales hadn’t waned significantly. However, the phenomenon of the jeans style of the moment that dominated purchasing habits for years has given way to buyers putting their faith in a select group of proven brands that can provide consistent quality, delivery and sales.

“Buyers are exhausted with denim,” Ray Tolles, vice president of U.S. sales for the 1921 label, which is owned by the maker of Silver Jeans, said at the Project show. “It’s gone from [buyers having] 15 to 20 lines to having six today.”

Tolles said many brands in recent years have been riding the rising tide of the premium market, pricing their jeans not to what they actually cost to produce but to what the market could bear. Consumers and buyers have acquired an understanding of the ins and outs of the premium market, making buyers less willing to deal with late deliveries and inconsistent quality, and consumers more savvy about how they spend their money.

“Some say there’s fewer dollars in the category, but, really, it’s increasing the dollars for brands such as ours that can perform well,” Tolles said.

“As much as the trend has been going thinner, boot is the most flattering to every body type,” Lyu said. “Stores want to be able to sell everyone, not just that one trendy girl.”

Lyu also has seen buyers limit the number of brands they carry without greatly reducing their investment in denim.

“I see the denim buyers being a lot smarter,” she said.

The pressure on new brands to present unique product is higher than ever, said David Long, a founder of Mynk, which was launched last year. Despite the focus on key brands, buyers still need to offer their customers something new, which has worked to the benefit of Mynk.

“I doubled my business from holiday to spring and I’m looking to triple it for fall,” Long said.

Gianpiero DiBitonto, vice president of sales at Jet Lag, has seen more lower-price brands made in places like China and Turkey coming into the market. Buyers and consumers recognize they can purchase similar goods at lower prices now, DiBitonto said, adding that those following a lower-price strategy in selling to boutiques could run into problems.

“If you’re a specialty boutique, and you’re selling for between $70 and $120 at retail, you can’t compete with a J.C. Penney or a Gap or a Hollister,” DiBitonto said. “All they’re doing is putting themselves in that segment and they can’t compete. That’s the danger that they’re running into at the moment.”

One of the few new brands at Project was Coil, launched in October and targeting this lower price point. Brooke Jones, the brand’s West Coast sales representative, acknowledged that buyers were hesitant to take on new lines. However, Coil, which retails at $130, had generated a strong response from buyers looking to cover the pricing spectrum.

Premium denim labels seemed to be less prevalent at Blue compared with previous editions of the show. For those devoted denim labels that were exhibiting, however, the message from buyers was the same.

“I think there’s been a major shift from buyers going to a show and buying a taste of every line,” said Amanda Hynes, a sales representative with Paige Premium Denim.

Sarah Garonzik, a senior account executive with Hudson Jeans, has seen customers remain devoted to the brand’s core boot cut. But consumers also have been willing to try something new, which has made the brand’s wide-leg, trouser-cut jeans the number-one reordered item throughout the country, she said.

“They’ll buy our basic boot cut, and they’re willing to try something different,” Garonzik said. “There really is a willing consumer.”