Buyers on the Upswing at FAME and Moda 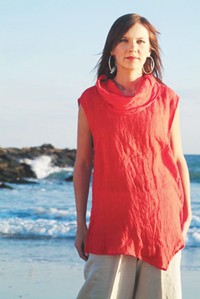 The shows shared the most physical space yet — 150,100 square feet — and attendance was up about 5 percent from last January, to about 15,000 buyers, according to Britton Jones, president and chief executive officer of Business Journals Inc., which owns the exhibitions. “This is the best January market our exhibitors have had in years,” Jones said. “Buyers who normally shop us on Monday and Tuesday were in here on Sunday, and many thousands of buyers who were in on Sunday — more than 25 percent — came back on Monday. I think that speaks to the quality of resources, so that they needed to come back to shop the whole show.”

Exhibitors applauded the space-sharing strategy, saying it creates a symbiotic relationship for exhibitors and buyers.

“This time of year, people come to shows for accessories, but a lot of those people are also crossing over to come to look for apparel,” said a representative for the German misses’ line Oui Moments, which showed at Moda. “Traffic has been good, and writing has been really good for wear-now.”

Kimberlie Collins, who owns dress boutique Name-Dropper in Sewickley, Pa., first was impressed by the accessories, but then found apparel on which to spend her slightly higher open-to-buys. “The stuff is really unique this time,” Collins said.

While overlapping shows help, the last-minute movement of Intermezzo Collections hurt business, said exhibitors. Intermezzo had been scheduled to take place Sunday through Monday — overlapping perfectly with Moda and FAME — but was pushed back to Tuesday through Thursday.

Michelle Kim, president of the Los Angeles contemporary line 213 Industry, said she had hoped for more higher-end buyers at FAME for her line, which wholesales from $60 to $150. Kim thinks the buyers planning to go to Intermezzo did not make it to town in time to go to FAME.

“Traffic is steady, but we expected it to be busier,” said Kim. “People have been bummed out because Intermezzo moved at the last minute, and we’ve missed a lot of the high-end customers.”

At Moda, Xiao designer Cynthia Chow agreed she did not find the new customers she had hoped the show would bring. “Most of the people who wrote are people who we have already done business with, who bought what they always buy, but we were really hoping to get new accounts,” Chow said.

Others raved about the buying. “Traffic has been incredible, and almost everyone is writing,” said a rep for the Brazilian yoga-inspired line Goddesswear, which showed at FAME.

Traffic and writing began with a boom Sunday, but tapered off the second day at Moda, according to Keith Miller, the husband of Nanako, the designer of the Nanako line, based in New York, which wholesales from $15 for tops to $140 for jackets.

For Nanako, like many other exhibitors, print dresses — particularly bright colors and ethnic and animal prints — sold well after seasons of neutrals and black and white.

“There’s a mix of what is selling well,” Kim said. “Some buyers are scared of prints, but some love it because they are so used to seeing the light colors.”

Houston designer Gayla Bentley found that same mix of color demand for her line, which sells in sizes 12 to 28 and wholesales for $45 to $85. At Moda, her blouses, tunics and dresses, all with obi wrap options around the waist, were her biggest sellers, but orders ranged the full color spectrum. “Of course, reigning always is black and white, but buyers are liking prints and pastels, too,” Bentley noted.

At FAME, Jessica Tam, who represented San Francisco contemporary line Young Essence, called the traffic crazy, but could not pinpoint a single item in which buyers were most interested. “It’s hard to say what is doing well because it is all over the board,” Tam said.

Anthony Wolfe, designer and rep for the Ash & Sara line that showed at Moda, said offering a range of products was the best strategy.

“What people are buying is all over — some printed Ts, some flowy Moroccan looks,” Wolfe said. “So many buyers don’t know what they want anymore that showing a wider selection is helpful.”

That’s the theory of Genita Ingram, who represented the Downtown Showroom Inc. While buyers were “mostly looking” at the South Korean organic line Flow Ryu, traffic was good at the retro-classic Sally Bridge line, based in Pawtucket, R.I., and the Courtney Washington line, based in New York, she said.

More than anything, buyers were scouting pieces they had not seen before. Jack Anderson, who owns four boutiques in Key West, Fla., could not put his finger on exactly what he was looking for besides “what I don’t have.” After four hurricanes last year, Anderson said business had picked up since November.

“Business overall has had a slight increase, but I am being tougher as far as buying is concerned,” said Jay Mehta, who owns Boutique Karma in Decatur, Ga. “I walk as much as possible here, trying to find things out there that no one else has.”