The tribe of contemporary designers that includes Jason Wu, Alexander Wang, Prabal Gurung and Thakoon Panichgul came into its own during fashion week. 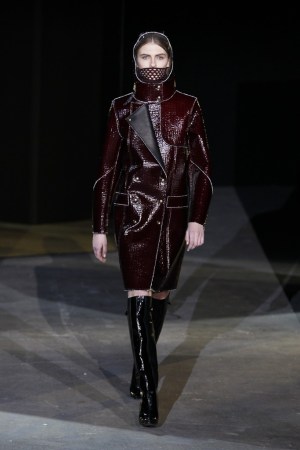 New York is coming of age.

The tribe of contemporary designers that includes Jason Wu, Alexander Wang, Prabal Gurung, Thakoon Panichgul, Derek Lam and Phillip Lim came into its own during fashion week, store buyers said. While designers in the group have been on retailers’ radar for several years and their businesses have been growing steadily, executives said fall 2012 was when they broke out.

“Ten years ago, it wasn’t about designers in America,” said Sarah Rutson, fashion director of Lane Crawford. “These young designers, it really is their time now. They’re superconfident. In a market where people are feeling quite nervous and a lot of stores are talking about how there’s a lot of uncertainty, designers are playing it safe.”

Not this group, which experiments with high-tech fabrics, leather splicing techniques and unusual fabric juxtapositions.

“We are prepared to spend the money on brands that are offering something so unique and fresh that it’s going to stand out on the hanger,” Rutson said. “They’re giving us what we want in terms of quality and elevation of design.”

“Contemporary designers ruled the week,” said Stephanie Solomon, vice president of fashion direction at Bloomingdale’s. “I loved Michael Kors and Ralph Lauren and appreciate their experience and their skill. But that [younger] generation is taking over the spotlight. The younger designers are being taken seriously on the global stage. There’s this new force.”

Sarah Easley, co-owner of Kirna Zabête, said, “New York felt so strong and forceful. So many designers found their voices. It felt like Europe, not New York. The couture quality, the details.…It was a polished week.”

The rise of the contemporary cadre could be a matter of timing. Many have been in business for about five years. “They’re hitting their stride,” said Kirna Zabête’s co-owner Beth Buccini. “They’ve had enough experience.”

Financial backing has also made a difference. “At Proenza Schouler, you could feel that there was some money behind the collection and the boys could really create their dream and not worry about anything else,” she said. Andrew Rosen and John Howard invested in the business last year.

Retailers said the contemporary business has been leading other areas, such as designer. “There’s a huge surge of amazing fashion in contemporary,” said Elyse Walker, owner of a 6,500-square-foot store in Pacific Palisades, Calif. “There may be a shift where some designer customers start wearing contemporary because the design is so amazing. Contemporary has been on fire in our store for two seasons.”

Here is what buyers had to say about the New York season:

Linda Fargo, senior vice president, fashion office and store presentation, Bergdorf Goodman:
Big picture: It felt like the designers saved their gunpowder for fall, on the heels of a rather tepid pre-fall.

Trends: Fall will have rich offerings, given the sophisticated sensibilities we saw, such as tonal dressing, tailoring, ultrashine, military moods, leather separates and novelty fur.

Thrill me: Special mention to Joseph Altuzarra and Proenza Schouler for their highly original collections. No other country cultivates its young tier of designers like the U.S., the bench strength of our fashion future.

Stephanie Solomon, vice president of fashion direction, Bloomingdale’s:
Trends: A return to sportswear, a plethora of leather, fur and shine, the all-important three-quarter length coat. Luxury fabrications and innovative fabrics like the kind we see in Paris or Milan but don’t see as often here, holograms, shine and use of technology that created an extra-terrestrial luminescence.

Thrill me: Rag & Bone’s Marcus [Wainwright] and David [Neville] set trends and raise the bar. Helmut Lang was innovative and inspiring and Rebecca Taylor’s collection was sophisticated and urban, not girly. Phillip Lim, Jason Wu, Alexander Wang, Thakoon and Derek Lam are the future. Young designers are not afraid to experiment. Tory Burch showed a perfect collection and moved to a whole other level. Marc Jacobs kept me spellbound and curious.

New York, New York: The rising designers, the modernists, to me that’s what’s taking over. Maybe New York is growing up. There seemed to be more retailers from European countries at the shows. There’s a new buzz about this new generation.

Sound off: The fashion week calendar has become far too cluttered with multiple designers competing in the same time slots. Not every designer needs to produce a full-blown runway show.

The price is right: At Lane Crawford, we are fortunate we’re in the most booming part of the world, Hong Kong and China. It’s not about price, it’s absolutely about design.

Trend backlash: Oversize. So few people can get away with it. I don’t want to see it — ever. Midcalf-length skirts or dresses don’t rock our boat, either.

The price is right: The customer is discerning about how she’s spending her money. Prices for fall are all over the board due to workmanship, cashmere, fur and leather. It has to be emotional.

Hot new designers: We placed our second order with newcomer Tess Giberson. We’re still waiting for our first order to be delivered, but that’s how it is with young designers.

Bury these trends: A lot of outerwear that just isn’t flattering. It’s very architectural, but not flattering. Women will need to work out to wear the big and oversize trend. Nobody wants to buy something that makes them look fat.

The price is right: Everybody is really aware of prices. We had an absolutely strong holiday season and January was our best month ever. Women are shopping, trying new things and being experimental.
Hot designers: Our Prabal Gurung orders are up by 25 percent. He’s a rising star, but next year he’ll be a star.

Barbara Atkin, vice president of fashion direction, Holt Renfrew:
Big picture: What we’ve seen coming out of New York fall 2012 will have enough of the right ingredients to entice shoppers. New York stayed true to its 7th Avenue “sportswear” roots, but with an eclectic spirit. The return of well-tailored jackets, luxurious coats, skirt suits with skirts below the knee and beautiful blouses will round out an elegant wardrobe.

Thrill me: Marc Jacobs took us on a journey and reminded us why we’re in this business of fashion. Oscar de la Renta spoke to his existing customer and grabbed the attention of a new generation of luxury spenders. Michael Kors proved his business model of well-developed luxury and attainable fashion with extended growth in accessories, has made him a star on 7th Avenue and Wall Street. The new guard of young American designers, including Alexander Wang, Phillip Lim, The Row, Rag & Bone, Jeremy Laing, Helmut Lang, Rachel Zoe and Altuzarra, are offering style and price points that speak to the next generation of consumers who’ll have a long life of earnings ahead of them.

Hot new collections: Skaist-Taylor from the Juicy Couture girls, offers an eclectic, well-priced collection of items for an advanced contemporary customer. Canadian talent Jeremy Laing continues to home in on his own signature, creating a dynamic collection of easy, eclectic separates.

Arm candy: We were excited to see the new bag shape on the Proenza Schouler runway. Also, a knockout handbag collection from The Row, strong new styles and materials at Alexander Wang and 3.1 Phillip Lim and we loved the new bag at Rag and Bone. Narciso Rodriguez was very promising with a stunning shoe collection debut. His bags are off to a great start.

Sound off: It would be great for designers to move away from heavy fabrics for outerwear. We think our customer is looking for less season-specific layering pieces that can be worn from fall through spring.

Hot new designers: Maiyet, which is redefining global luxury with classic clothing and chic accessories made in indigenous locations in a sustainable way, had a strong sophomore collection.