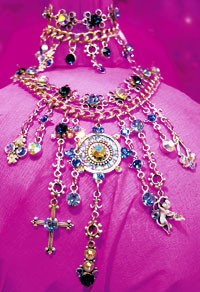 Retailers shopping the events, which ended their four-day run Sept. 6, reported good business moving into fall and said they would increase budgets for next year by about 20 percent.

“I’ve been coming to Paris for some 30 years for accessories for the elegance and choice,” said Pam Pappas Stanoch, who is preparing to open a shop in Minneapolis called C’est Chic. “This season, oversize jewelry is really very trendy, as are all things that shine. In other words, baroque is strong. Even in scarves there’s a jewelry effect. Accessories are becoming like jewelry.”

While neo-punk designs were the rage a couple of seasons back, they were almost absent this season in bags. Instead, styles were sweeter. Colors ranged from yellow and green to rose and blue.

“The finished looks are doing well,” said Sanna Kantola, designer of the Lumi brand, exhibiting at Who’s Next. “We’ve been selling a lot of [metal] frame bags and big canvas beach bags.”

Kantola said this season’s model lined with seersucker and printed with the illustrated imaginary contents of a travel bag — including a novel entitled “Sex on the Beach” — had been a hit.

“If it’s chic and elegant, then it’s not fashion and it can last a bit longer,” said Myrto Fereou, shopping Who’s Next for the Cyprus accessories store Fereos Limited. “Oversize jewelry has the merit of seeming new, but it can be worn well into the future and seen as a good investment.”

At Bijorcha, buyers looked at the costume jewelry in the Eclat de Mode section, saying that the trends looked business friendly. They said top looks were feathers and sequins on necklaces, ribbon closures on bracelets and necklaces, chandelier-style earrings and abundant use of Swarovski crystals.

On the other end of the spectrum, oversize silver jewelry with a Medieval amour had a small group of fans.

Arlene Nee, owner of Azara in Westmeath, Ireland, said business had been picking up in her store over the last six months. She said she planned to increase her budget 20 percent.

“Crystals and bronze looks are very beautiful and should sell great,” Nee said. “I also like the playfulness of pieces integrating feathers or fur into necklaces, earrings and bracelets.”

London-based jeweler Rodrigo Otazu said baroque items such as a necklace with an enameled Jesus decoration had attracted attention.

“Business has been strong so far,” he said. “Colors and crystals are the big hits with buyers. Blue is strong because it goes with jeans.”

Natasha Ichmouratova, shopping for the yet-to-be-named jewelry store in Moscow planning to open later this year, said “baroque modern” was her catchword.

“It needs to look different and yet be wearable,” she said. “I like drop-crystal earrings and oversize necklaces with colorful crystals. Women like shiny things that get them noticed.”

Kate Hermansen, who runs the De Luxe jewelry and accessories shop in Finland, also said her budget would climb 20 percent.

“Sales have been strong in recent months,” she said, adding that antique-looking bronze necklaces were among her top sellers. She also said very feminine looks, such as pearls, and extravagant necklaces with quartz, crystal or jade were strong.

Premiere Classe said 13,100 people visited its show, while Bijorcha said 18,810 buyers attended, an 8.3 percent increase over a year ago.