Buyers Shop for Immediate and Fall Delivery at Fame, Moda

The shows ran May 7 through May 9 at the Jacob K. Javits Convention Center. 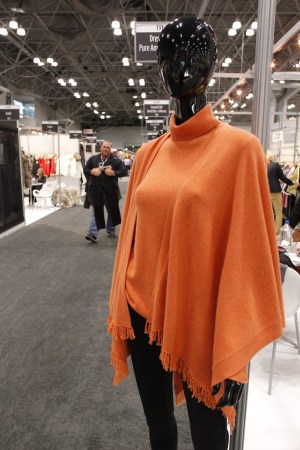 Booths at Fame and Moda Manhattan were crowded with retailers looking to buy spring merchandise for immediate delivery, as well as place orders for fall-winter merchandise.

Some 500 ready-to-wear lines were shown at Moda, featuring knitwear, coats, dresses, outerwear and fur. At Fame, a selection of 500 junior and young contemporary lines were presented. The shows ran May 7 through May 9 at the Jacob K. Javits Convention Center.

Among the fashion trends at both shows:

• Color continues to dominate in tops, dresses, knitwear and jeans, including those in the burgundy, green and orange families. Prints, patterns and bold stripes were evident throughout both shows. Black is also making a comeback.

• Men’s wear details in jackets and pants, as well as luxurious suiting fabrics.

Vintage Havana, a junior-contemporary firm at Fame, was bustling with retailers. Joseph Shiloach, vice president and brand merchandiser, said the company sells at such stores as Bloomingdale’s, Nordstrom,  Fred Segal and Lester’s. He said he carries every category of apparel and most of his inventory retails for less than $100. Fifty percent of the line is made in the U.S., and he imports the other half. “It all has a cool, vintage-y feel to it,” he said.

Hillary Scharf, owner of Hillary’s, a specialty store in Warren, N.J., said she buys Vintage Havana for her clientele, which ranges from young girls to teens, college students to moms. “The dresses do really well, especially this time of the year,” she said. She also sells the company’s sheer tops and shorts. “They just get it. They identify what the fashion is” and make it affordable, she said. Other vendors she buys are Mystree, where she was finding things that were lacy and pretty, as well as Sugarlips, where she buys a lot of staples, and Tcec, where she likes the fake leather jackets. She said she also liked the tops and jackets at Blu Pepper.

Scharf said colored denim is selling well at her store. She expects to sell a lot of ankle-length and shorts for spring and summer. “It’s been a great spring. We brought in shorts early,” she said.

Holly Green, owner of Infinity, with five stores in the New York metropolitan area, said she liked what she was seeing at Ocean Drive, especially the high-low shirts in plaid chiffon, and Vintage Havana’s “great chiffon shirts.” She also liked the “skull shirt” from Vintage Havana and high-low color-blocked sweaters, with buttons in the back, from Mak. Green described current spring business as good, and said: “Color is still selling well, but black is better than ever.”

Rosalie Manning, owner of Card-o-mat, on the Upper West Side of Manhattan, said this was her first venture into clothing. Her 1,000-square-foot store, which is located on Broadway and 112th Street, near the Columbia University campus, sells cards, graphic T-shirts and baby gifts. She said she was looking for clothing that would attract the Columbia students to the store. “We’re looking to diversify,” she said. Among the items she was seeking were sweaters, wraps and sportswear pieces.

Melanie Hadfield and Jill Pemberton were shopping Moda seeking clothes for their new women’s store, Tatum and Olivia, which will open in British Columbia on Aug. 15.  They expect to do about 60 to 70 percent of the manufacturing for their store in Vietnam, and were at the show to buy items for other categories, such as sweaters, leggings, handbags and shoes.

The three owners of Raggs on the Boulevard, a Seabrook, Md.-based specialty store, were shopping Moda for upscale women’s apparel, as well as some accessories and handbags. Tenika Felder, one of the owners, said she liked Samuel Dong and Vintage Highway.

One Moda exhibitor, Judy Petraitis, owner of Judy P, said she was having success with her Made in the USA line of T-shirts and tops, which aren’t too tight and have a misses’ fit. Petraitis said she offers seven styles in assorted colors, wholesaling from $30 to $36. “I definitely come here to open new accounts,” she said.