Despite wide critical acclaim for designs by Olivier Theyskens, the Rochas fashion house is to be shuttered, WWD has learned. 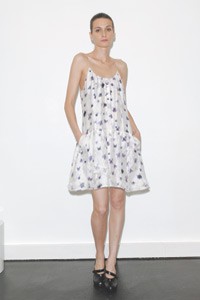 PARIS — Despite wide critical acclaim for designs by Olivier Theyskens, the Rochas fashion house is to be shuttered, WWD has learned.

Procter & Gamble — owner of the business — met with some 30 workers here Tuesday to propose a shutdown plan, a company spokeswoman confirmed. She would only add that the fall-winter ready-to-wear collection — highlighted by lean pantsuits and ethereal gowns — would continue to be shipped.

According to an industry source, P&G owns and will continue producing fragrances under the Rochas brand; however, fashion is not its core business.

Retailers have not yet been informed of the Rochas fashion closure and no official announcement is expected. Laying off workers is a complex and lengthy process in France and could take several months.

P&G inherited Rochas — both its fashion and fragrance arms — in 2003, when P&G kicked off the $6.9 billion acquisition of Wella’s portfolio, which also included the fragrances for brands such as Anna Sui, Montblanc, Escada and Gucci. There were no other fashion companies besides Rochas in the holdings.

According to the industry source, P&G had tried to license out the Rochas fashion business, but there was only interest in outright acquisitions of the fashion and fragrance brands together.

The shutdown will mark the end of three years of acclaim for Theyskens, who made Rochas one of the most anticipated and lauded shows of Paris Fashion Week and a favorite resource of retailers such as Barneys New York, Jeffrey and Neiman Marcus. Earlier this year, Theyskens received the International Award from the Council of Fashion Designers of America.

It is understood the Rochas ready-to-wear business grew some 30 percent last year, and the company received a strong reaction to its pre-spring 2007 collection, unveiled earlier this month during the couture shows. But ultimately, Rochas was considered a niche label, known for cocktail attire and extravagant gowns that could cost as much as $35,000 at retail. The financial performance of the fashion house could not immediately be learned, but it is understood it was loss-making.

Historically, beauty companies have found fashion businesses difficult to master and disposed of them. In recent years, L’Oréal spun off its Lanvin fashion holding and Groupe Clarins stopped manufacturing the Thierry Mugler fashion brand to focus on its hit fragrances.

This story first appeared in the July 19, 2006 issue of WWD. Subscribe Today.

But the Rochas shutdown also underscores that media acclaim is no guarantee of security for designers at a time of intense bottom-line focus. Although American fashion critics and magazines in particular fawned over the 29-year-old fashion wunderkind, the business did not reach critical mass.

Theyskens could not immediately be reached for comment, however, sources speculated he would likely seek funding to reestablish his signature label, which he owns but put on hiatus to concentrate on Rochas. Though he often stressed his commitment to Rochas, saying that he felt at home at the house, Theyskens continued to speak frequently about his own brand and its aesthetic as if it was never far from his mind. He liked to talk about some of his design ideas as belonging to his world, and being unfit for Rochas.

A Belgian based in Brussels, Theyskens leaped onto the international fashion radar in 1998 at age 21 when he dressed Madonna in a striking black satin coat with hook-and-eye closures for the Oscars and she anointed him her new favorite designer, again donning his gowns for the VH1 Awards in New York later that year. Theyskens was immediately dubbed a Goth hero and gained a reputation for theatrical fashion shows. At one, the end of his elevated runway, which had just supported a model in a massive gown, sprouted a crack and tumbled to the ground. The name of fashion’s new hero was soon on everyone’s lips, and he was considered a front-runner to succeed Alexander McQueen at Givenchy in 2001.

Theyskens joined Rochas in 2003 at the tender age of 26. He replaced Peter O’Brien, who had been brought in four years earlier to revive rtw. Fashion operations had ceased in 1955 following the death of founder Marcel Rochas, known for his feminine silhouettes and a bustier dubbed “the guepiere.”

Theyskens immediately established a sophisticated couture look for Rochas with his debut collection, which featured dramatic “hunchback” gowns and bustier dresses that enveloped the body like a cream puff.

But, amid such showstoppers, Theyskens made Rochas into one of the torchbearers for what has become a new refinement in fashion, lifting inspiration from the world of Paris couture, and blending it with a modern point of view.

No one expected Theyskens to trumpet elegance when he arrived at Rochas, given his reputation for darkly romantic confections in his own label. But he often said that in his designs for Rochas he was exploring another side of his personality, one that was more contained and strictly defined.

A few months ago he told WWD: “My idea for Rochas was based on a very Parisian vision, which is a slightly intellectual approach to fashion and one that centers on the idea of taste.” Recent collections were inspired by Monet’s water lilies and chimney sweeps, but they displayed Theyskens’ concentration on developing pure silhouettes — as in the thin pantsuit he showed for fall-winter. “What I feel modern is to make clothes that have poetry and inspiration,” he said. “Modernity is an attitude and an approach to fashion. What is most important is that the personality of the designer come out in the clothes.”

The size of the Rochas fragrance business could not be learned. However, industry sources say it remains “very healthy,” particularly in France and Spain.

Among the brand’s fragrances are Poupee (or “Doll,” in English) for women, which Theyskens unveiled at a Rochas show in 2004, after he was made responsible for the brand’s scents, as well as its artistic director. The designer described the fragrance, housed in a pink bottle topped with a red spray cap, as “very feminine and very couture.”

In the meantime, P&G kept bulking up its prestige beauty stable. By last year, it had fully integrated Wella’s fine fragrance division, called Cosmopolitan Cosmetics, into P&G Prestige Beauty. The division had a war chest of global and locally acclaimed prestige scents — including most of the former Wella-owned licenses (a handful had been spun off), plus brands such as Lacoste, Valentino, Max Mara and Jean Patou. Together, they generated almost $2 billion and were rivaled only by the world’s biggest prestige fragrance player, L’Oréal.