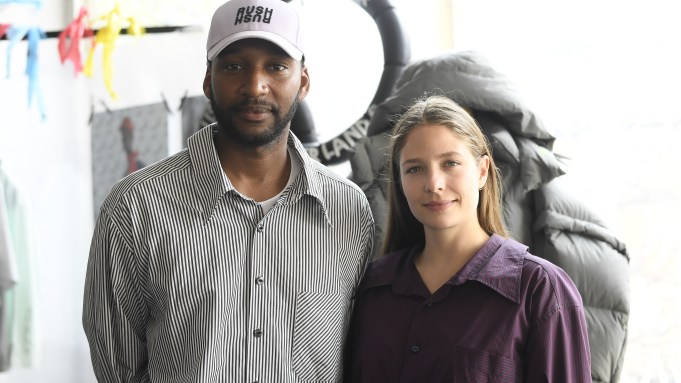 Winning over a jury headed by Haider Ackermann with their playful yet politically charged men’s wear collection, “Fish or Fight,” of the 10 finalists, Botter and Herrebrugh were the most established.

The Amsterdam-based men’s wear brand since launching for spring 2017 counts eight points of sale, including H. Lorenzo in Los Angeles. It presented as part of the VFiles show at New York Fashion Week in September 2016, and is also one of nine finalists competing for this year’s LVMH Prize for Young Fashion Designers. Winning Hyères may prove a bittersweet moment for the designers as it may impact their chances of being selected for the LVMH Prize.

Botter and Herrebrugh are based in Antwerp, but grew up in the island of Curaçao  and the Dominican Republic, respectively, with Caribbean style the main inspiration for their work. Herrebrugh, 28, studied fashion at the Amsterdam Fashion Institute, while Botter, 32, graduated with a master’s from Antwerp’s Royal Academy of Fine Arts last June.

Inspired by the Caribbean locals, “the people on the street, and how they use everyday stuff in a creative way,” highlights of their collection included a white suit in a bold, naive hand-painted floral, and a hybrid striped silk jacket based on a trouser pattern, keeping all the details like the back and side pockets but constructed to be worn as a jacket. The piece was inspired, said Herrebrugh, by this idea of “a taxi driver who is driving all day in the street and one arm is always out. He wants to protect himself from the sun, so he cuts off his trousers to use as a sleeve.”

The styling was superfun, with plastic-bag scarves and inflatable toys strapped to the models’ heads, with some of them trailing colored fishnests inspired by Botter’s fisherman grandfather.

The Première Vision Grand Prize is valued at 15,000 euros, or about $18,000. The designers will also be given access to work with the specialty ateliers that Chanel controls through its Paraffection subsidiary, a prize valued at up to 15,000 euros. They will also receive a 10,000-euro grant from Petit Bateau and get to produce a capsule that will be manufactured and sold by the brand.

Chloé for its prize awarded a grant of 15,000 euros to Canadian designer Marie-Ève Lecavalier who also received an honorable mention from the jury.

The designer, who grew up in the suburbs of Montreal, is interning with Raf Simons in Antwerp. Her collection was inspired by being introduced to the world of Frank Zappa, “psychedelic music and all those wavy distorted sounds,” at age 15 by her musician father. Highlights included the white shirts in computer-generated psychedelic prints and deconstructed vintage denim and leather pieces made by hand.

“When I was a kid, I had a lot of time on my hands and a lot of imagination, so I deformed reality in order to amuse myself in everyday life,” she said.

The Public and City of Hyères Award went to Belgium’s Sarah Bruylant.

Christelle Kocher, artistic director of Maison Lemarié, presided over the event’s Swarovski Fashion Accessories Grand Prix of the Jury prize, now in its second year, which went to H [earring]. The jewelry concept is based around aesthetic hearing aids, borne out of a collaboration between Kate Fichard, a photographer who is hard of hearing, and designers Flora Fixy and Julia Dessirier. The award comes with a 15,000 euro grant from the Austrian crystal giant as well as the opportunity to undertake a project with Chanel’s Métiers d’Art for a value of up to 15,000 euros.

Marking 11 years of collaboration with the event, Galeries Lafayette also selected an inclusive talent, France’s Ester Manas, as its next guest designer, with a limited-edition collection to be distributed in selected stores from the retailer’s network as well as on its web site.

Manas described her collection — “Big Again” — as “a celebration of shapes.” She built the collection on 12 women across the past year.

“I’m size 44, and I did this because I can’t find anything to wear. It’s a reality,” said the designer, whose pieces included shorts coated in a jesmonite mineral powder with a crackled red surface, inspired by a volcanic explosion. “It’s a story of empowerment,” she said.

Highlights of the festival included a workshop with Bettina Rheims, head of the photography jury; a festival shop designed by Vincent Darré and Matthieu Cossé, an American Vintage party at the Hyères Hippodrome, and a tribute screening of the documentary “Monsieur Givenchy” by Karim Zeriahen.

Due to wrap on Monday, the four-day event, held in the Villa Noailles in the South of France, has been a springboard for designers such as Julien Dossena, Viktor & Rolf’s Viktor Horsting and Rolf Snoeren, and Saint Laurent’s Anthony Vaccarello.