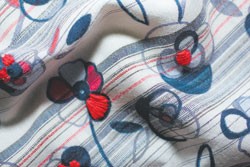 NEW YORK — Spring 2007 trends at Direction and Printsource, both held at the Hotel Pennsylvania last week, were twofold. In one corner, a nautical feel abounded. “Blue, in all ranges, is going to be key for the new spring season,” said Brewster’s Paul Brewster at Direction. Two-tone motifs, such as blue and white, as well as red and white, were especially important, many with seafaring designs such as ropes and anchors that were printed and embroidered.

Clean tropicals and an Asian influence were also strong, however, “the Asian feel is not as literal as before,” said Tricia Langman, co-owner and designer at Spoogi, which showed at Printsource. “It’s a slight kimono feel.”

In addition, lace prints gave a fun alternative to the actual fabric, which was also key, and influenced by vintage Victorian looks. At Direction’s The Colorfield, many lace prints were featured in bright, almost acidic colors in two-tone contrasts, such as kelly green and white, and fuchsia and chartreuse. Colors at both shows included soft neutrals such as white, cream, oatmeal and muted blue and rose; brighter midtones, many of which were blue or red, were also seen.