NEW YORK — As the premium jeans business has taken off in recent years, with tremendous amounts of attention focused on high-end brands retailing for $100, $200 and more, industry executives have pointed out that, while this upscale business was... 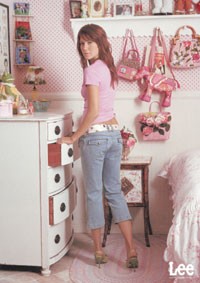 NEW YORK — As the premium jeans business has taken off in recent years, with tremendous amounts of attention focused on high-end brands retailing for $100, $200 and more, industry executives have pointed out that, while this upscale business was highly visible, its volume was tiny.

In a recent conference call with investors, Mackey McDonald, chairman and chief executive officer of VF Corp. — the world’s largest jeansmaker, which owns brands including Wrangler and Lee — hammered home this point: “We hear a lot of buzz in the premium end of the market, but this is a very small piece of the business at retail in total. We do participate in the high end with our Earl Jean brand, but this area in general tends to be quite volatile.”

McDonald’s assessment was accurate. But recent statistics show that the premium category — defined as $100-and-up jeans — is starting to move the needle of the entire $6 billion-plus women’s jeans business.

According to the Port Washington, N.Y.-based market research firm NPD Group, sales of women’s jeans priced at $60 and up more than doubled for the year ended in February, representing 5.8 percent of the market, compared with 2.9 percent a year earlier. (See Table 1.)

Market research firms in recent years haven’t released specific figures on market share for jeans $100 and up because they’ve found it’s hard to measure reliably such a small segment of the business.

The influence of the high-end market can be seen in other ways: Sales of jeans $40 and up grew for the most recent 12-month period NPD measured, while sales of jeans priced for less that $40 declined. The group also found that the average unit price of jeans jumped to $21.80 compared with $20.44 a year earlier.

STS Market Research, a Cambridge, Mass.-based firm, found a similar trend. It reported that the average price of women’s jeans in 2004 was $23.12, up from $22.51. That 3 percent increase came at a time when overall sportswear prices declined 1 percent, the firm noted.

Art Spar, president of STS, said the numbers show that, while only a small percentage of women are willing to pay triple-digit price tags for jeans, the fact that some are willing to do so seems to make it easier for people who are buying cheaper jeans to trade up a little. So a woman who, a few years ago, might not have been able to rationalize spending $40 on jeans when she could find a pair for $30, might now compare the $40 price tag in her local department store with the the $125 jeans she read about in a magazine and decide the $40 pair is a comparative bargain.

According to both NPD’s and STS’ estimates, the increase in the average price of a pair of jeans helped drive up the overall category last year. NPD estimated that overall, women’s jeans sales for the year ended February came to $6.84 billion, an 8.8 percent increase from $6.29 billion a year earlier. STS put the overall 2004 sales figure at $6.16 billion, up 9.3 percent from $5.64 billion in 2003.

Both NPD and STS base their figures on surveys of American shoppers. Differences in their sample groups, as well as the vagaries of human memory, contribute to the disparity in the figures the two groups report.

STS’ Spar said consumers’ willingness to pay higher prices for jeans reflects the fact that jeans have been perceived as a more fashionable item in recent years.

“The main significance of the premium market right now is that it’s making women want more fashion from their jeans, at all price tiers, not that everyone is wearing [premium jeans],” he said. “Commodity apparel is price-driven, and fashion apparel is less price-sensitive and more brand- and channel-driven.”

The demand for more fashion-forward jeans, coupled with an apparent desire for salespeople who can explain the varying washes and fits between the premium lines, contributed to a surge in specialty stores’ share of the jeans market. STS reported that specialty stores last year saw a 15 percent increase in their sales of jeans. (See Table 2.)

“Specialty stores still remain the dominant place to buy jeans,” he said. “What makes it work is the relationship between the store and the consumer and the brand.”

But the strength of the specialty store channel doesn’t necessarily indicate that shoppers are all that influenced by what they learn in the store. According to Cotton Inc.’s Lifestyle Monitor, only 13 percent of women shoppers polled in the first quarter of 2005 said they got clothing ideas from salespeople, down from 17 percent a year earlier. Forty-eight percent of respondents said they were influenced by store displays, down from 57 percent.

It appears shoppers may feel they are now experts on denim, in that the poll indicated that all outside factors seemed to be waning in their influence on shoppers. (See Table 3.)

Cotton Inc.’s poll revealed an apparent side effect of the inflation in jeans prices: 67 percent of respondents this year said they waited until end-of-season sales to buy jeans, up from 60 percent a year earlier.

In a nod to the overall focus on value and heritage in the jeans business, the top 10 brands in the category continue to lean heavily toward moderate price points, with no purely premium brands on the list. Levi’s remained the top jeans brand, according to NPD. (See Table 4.)