The prim and proper look appeared to have taken over the Chateau Marmont's garden for the CFDA/Vogue Fashion Fund runway show, which capped off Los Angeles Fashion Week on Friday. 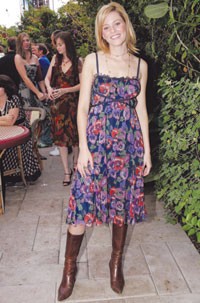 LOS ANGELES — The prim and proper look appeared to have taken over the Chateau Marmont’s garden for the CFDA/Vogue Fashion Fund runway show, which capped off Los Angeles Fashion Week on Friday.

The ladylike constellation in the front row — including a brunette Lindsay Lohan, Selma Blair, Alexis Bledel, Elizabeth Banks and Lynn Collins — wore the actual bling while taking in the show, each and every one of them decked out in pretty, knee-length dresses and nibbling on petit fours. The only thing missing were the white gloves.

Afterward, Lohan, who’s staying at the hotel, went backstage and ordered pieces from six of the designers. She might as well have been part of the show itself: Minutes before it started, she came downstairs to ask Paul Starr if he could do her makeup, too. Also on hand were New Yorkers Alexis Bryan, Tory Burch and Fashion Fund committee member Julie Gilhart.

The winner will be announced Nov. 10 at the CFDA gala in New York.