One of high fashion's most glamorous designers gets ready to retire after 45 years, and a flurry of changes surrounds his iconic atelier. Here, a scene from Valentino's fall couture show. 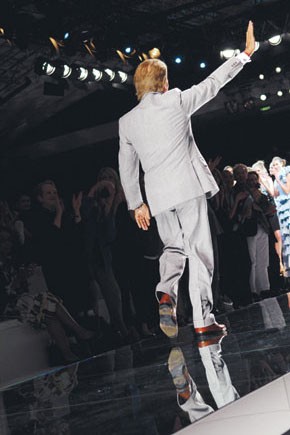 One of high fashion’s most glamorous designers gets ready to retire after 45 years, and a flurry of changes surrounds his iconic atelier. Here, a scene from Valentino’s fall couture show.

One of high fashion’s most glamorous designers gets ready to retire after 45 years, and a flurry of changes surrounds his iconic atelier.

Shall they stay or shall they go?

View the full coverage of  WWD Year in Fashion 2007 at www.wwd.com/yearfashion07 They went. After 45 years at the peak of fashion’s Mount Olympus and a loyal following of actresses, socialites and crowned heads, Valentino and his longtime business partner, Giancarlo Giammetti, said on Sept. 4 that they would retire after one more ready-to-wear show and one more couture presentation this January.

Questions about their future had churned throughout fashion circles ever since Valentino and Giammetti sent out “save the date” cards in the spring for a mega 45th anniversary bash in Rome. Many fashion insiders viewed the high-gloss celebration as the perfect opportunity for the 75-year-old designer to step down — which he and Giammetti repeatedly denied.

Adding more fuel to the speculation was an internal battle for control of Valentino Fashion Group that kicked off in May, pitting equity firms Carlyle (supported by VFG chairman Antonio Favrin) and Permira against each other. Permira outbid Carlyle, shelling out about $3.55 billion to buy VFG, which aside from Valentino owns a majority stake in Hugo Boss and men’s wear brand Lebole.

For the transaction, Permira set up a new company called Red & Black Lux Sarl, entirely controlled by the fund. Permira was founded in 1985 with a network initially based in London, Frankfurt and Paris. The Milan branch was set up in 1988 and is headed by Gianluca Andena and Nicola Volpi. Since it was founded, Permira has raised funds worth approximately $29.7 billion, investing in 180 transactions.

Between the takeover and the July festivities, questions raged about how much Permira needed Valentino himself — especially in the beginning, as it settled into the luxury goods pilot seat — and, conversely, how much did Valentino and Giammetti care to grapple with yet another new owner after HdP bought it in 1998 and Marzotto in 2002.

But Valentino and Giammetti insisted they were in no hurry to go anywhere. At a news conference just weeks before from the July bash, Giammetti waved off any rumors of a swan song by insisting that the two had bulletproof contracts and that “nothing had changed.”

Then, at the Rome party, sources said the two were renegotiating a three-year pact with Permira that was due to be finalized soon.

The Rome extravaganza was said to have cost more than $10 million — most of it paid by VFG. And the extravaganza had impact beyond the house of Valentino — organizers of the Paris fall couture shows and the Milan and Paris men’s spring collections moved up their respective fashion weeks to accommodate the bash.

But the party was worth every cent to the jaded fashion pack.

Valentino rejoiced in his role as King of Rome and la mode, feted by the crème de la crème of fashion, Hollywood and society. Among the 1,000 guests were Uma Thurman, Sienna Miller, Anne Hathaway, Giorgio Armani, Tom Ford, Karl Lagerfeld and Princess Caroline of Monaco.

The three-day event included fireworks and aerial acrobats in front of the Colosseum, a surprise Annie Lennox concert and dinners in such special locations as the Temple of Venus and Parco dei Daini within Villa Borghese.

Such a memorable event heavily influenced Valentino’s decision to step down, at least according to the statement revealing his retirement: “The great event that celebrated my 45 years of work in Rome in July was a magical and unrepeatable moment. It would be impossible to match the emotion and the joy for the friendship and consideration that the whole world expressed. Thus, I have decided that this is the perfect moment to say goodbye to the fashion world.”

Exactly what led Valentino and Giammetti to bid addio to the fashion world is still unclear, but the most likely scenario is that contract talks broke down, probably due to money issues. It’s no secret that Valentino and Giammetti were tough when it came to contract bargaining and securing high-lifestyle bonuses. According to one source, among the many clauses Valentino pulled off with Marzotto was for the textile maker to foot the bill for the crew on Valentino’s yacht.

Sources said in September the designer was “very upset” over his retirement and that he had “low regard” for Permira, while others claimed that after having shelled out billions of euros, Permira demanded carte blanche decision-making power.

But along with the speculation over the future of Valentino himself was the question of who could succeed The Chic, as WWD has called him. In July, VFG acquired a stake in Proenza Schouler, stirring speculation designers Lazaro Hernandez and Jack McCollough were being groomed for the job.

Instead, on Sept. 6, the company confirmed the buzz that Alessandra Facchinetti would take the creative reins of Valentino’s women’s collections, including couture. Facchinetti, who now shuttles between Rome and Milan and is implementing her staff in the latter city, will show her first Valentino main collection in Paris for fall 2008. Last week in New York, Facchinetti previewed her initial effort for the company, a pre-fall line, and explained her approach: “What I am doing is trying to establish my aesthetic into a Valentino frame. This is a house where couture was the main aspect. I want to explore the culture of couture. I want to keep the culture of the house in terms of gowns, but lighten it up.”

The day before Facchinetti was named to replace him, Valentino had said, “I realize that the maison that bears my name will change, but I hope that the creative [head] that will design the various lines where my assistants work will know how to continue my work in a way that will make me proud.”

He added: “I was lucky to be able to turn my teenage passion into a job that has always given me joy and recognition, and of having kept my style regardless of all the major changes that fashion underwent.”