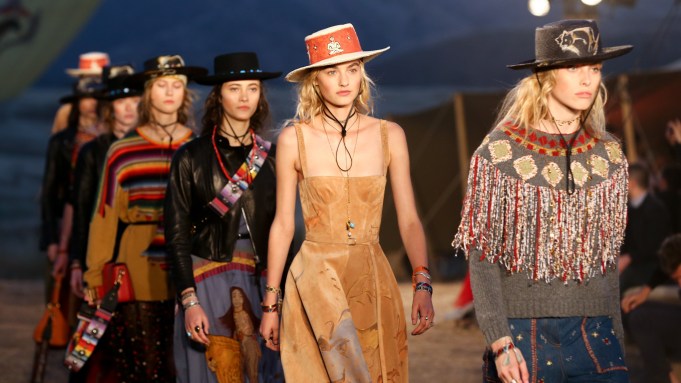 The first time Maria Grazia Chiuri came to California she was 22 years old — on a road trip with her husband just after they were married. They drove to San Francisco, Los Angeles, the Grand Canyon. “Many, many kilometers together,” she said at the Andaz Hotel in West Hollywood during an interview ahead of her 2018 Dior cruise show Thursday night in Los Angeles. “The USA is an amazing country if you go around in car, and not only arrive in New York or L.A. or the city. If you have time in the car, it’s unbelievable.”

To see the full run of show, click here.

The local landscape — ocean, desert, mountains — was what Chiuri wanted to highlight when she chose the Santa Monica Mountains at the Upper Las Virgenes Canyon Open Space Preserve in Calabasas, Calif. — for her first big destination event and experience.

Dior is not the first luxury brand to touch down in L.A. for a show, with Hollywood glamour, celebrity and the red carpet as the default reference, but Chiuri wanted to draw out a different side of the city. “I think the natural element is very strong,” she said. “I think people choose to live here because there’s big space.”

To that end, the venue spanned nearly 3,000 acres in the Simi Hills. Staging the cruise event there, billed as the first fashion show to happen in the preserve, required a ground-up build out. What was once home to the Chumash Native American tribe is now an area full of trails for walking, hiking, mountain biking and horseback riding. Guests attending the show received itineraries with a footnote stating that the dress code was “casual chic and warm. Flats and closed shoes are highly recommended.”

Heels and sandals were OK for Wednesday’s welcome dinner, where it was all about the California beach vibe — with a small dose of celebrities, too.

Dior commandeered popular waterfront seafood restaurant Gladstone’s, transforming it into the Dior Surf Club for the evening, when a handful of actresses such as Freida Pinto, Juno Temple, Jaime King and Kiernan Shipka joined in on the pre-show festivities that were arranged for traveling press and staffers.

Billowing gray and white Dior flags greeted the crowd as they alighted from their chauffeured SUVs and the already nautical-themed restaurant had its normal props replaced with personalized ones, from the gray and white life preservers and ping-pong tables to the mini bottles of cold-pressed juice. The hunky bartending staff donned Dior Surf Club T-shirts and poured Ruinart Champagne instead of California wines.

“I went to the cruise show last year in London. Very elaborate,” she said. “I love that L.A. is getting some love. It feels cool to go a Dior show in my own city. I never thought that would happen; I’ve only been to Calabasas once for a prom so I had a very high school Calabasas experience not a Dior cruise Calabasas experience.”

Pinto, who has also been to her fair share of international runway shows, and is now based in Los Angeles, said of the event, “I’m thinking, no jetlag. Amazing. That’s what I’m thinking.

“I’ve been to Calabasas, but I’ve never been to where the show is,” she added.

Indeed, most people know Calabasas as the sheltered, rustic suburb that’s the home of the Kardashian-Jenner clan and celebrities such as Jennifer Lopez. There’s nothing like a little driving adventure to coax most Angelenos out of their comfort zone.

One of Hollywood’s biggest fashion enthusiasts, King went all out for the casual dinner, donning a navy blue look from the fall collection. “It’s one of my favorite colors in the whole world,” she said. Touching her leather beret, which completed the runway looks, she said, “Oh, you know me. If the designer does it, I have to wear it exactly as the designer does it. Not a lot of people do that, but the designers work so hard on these clothes and I feel like they’re meant to be appreciated. At least, I appreciate them that way.”

Shipka, though she took a more casual turn in a belted black velvet jacket from the pre-fall collection, also touched on the functionality of her outfit.

“It has a hood that I have not used yet. But it’s going to get chilly tonight, so TBD on that.”

Chiuri let the location inspire the collection, which was flush with handcrafted details, artisanal touches — fur, shearling, feathers, fringe — and rich desert colors that gave it more depth than her previous efforts for Dior. The primary silhouette was nipped at the waist with a full midi skirt and chicly rugged hiking boots that epitomized the show’s dress code notice. She obliged house heritage by finding a concrete California connection to Monsieur Dior, who visited San Francisco in 1947, and a more tenuous tie to the look she wanted to pursue: Dior’s 1951 Ovale line. It included prints inspired by the primitive etchings in the Lascaux cave in Southwestern France, which Chiuri reworked for cruise.

But mostly Chiuri let her own interests drive the lineup, gathering a collection of muses and references that dovetailed with the feminist spirit she’s infused the house with beginning with the spring 2017 “We should all be feminists” T-shirts that have taken off. Photos of Georgia O’Keeffe by Ansel Adams, Cecil Beaton and Philippe Halsman were all over Chiuri’s mood board. She had seen “Georgia O’Keeffe: Living Modern” at the Brooklyn Museum, and co-opted the artist’s independent, desert-dwelling attitude and personal style for the collection. Almost every look was worn with O’Keeffe’s signature headgear: a bandana under a wide-brim straw hat by Stephen Jones.

Chiuri was attracted to the slightly shamanic quality O’Keeffe had, something that is far more pronounced in Vicki Noble, an actual feminist shamanic healer and author, known for her feminist tarot card deck “Motherpeace Tarot.” Chiuri contacted Noble and the two collaborated on tarot-inspired details worked into the collection. “She writes things that I think are very important, that women in the past are upset that others define them. I think that’s true,” Chiuri said. “She said that we have to start to define ourselves as we want and I believe in it. When I read the book and found this sentence, I said ‘I have to know her.’”

In designing the collection, Chiuri was conscious of the notion of women defining themselves. She wanted to put forth a strong point of view but in a way that can easily be dissected and personalized. In addition to elaborately embroidered dresses and jumpsuits there are moto jackets and piles of jewelry — woven logo bracelets and tribal pieces. “At the end, what I would like to say is that women ought to feel in contact with nature, ought to feel in contact with themselves and should be able to dress themselves in a way that’s really playful,” Chiuri said. “I think the collection is in this attitude also because we decided to show in L.A.”