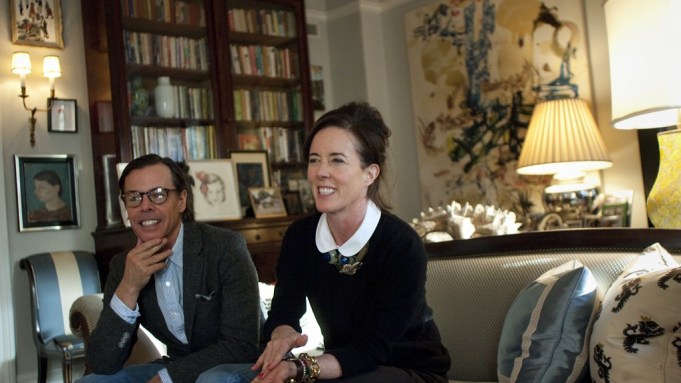 The day after this year’s presidential inauguration turned out to be the perfect time to interview Kate and Andy Spade on the 20th anniversary of the company they founded in 1993. For the ceremonial occasion of her dad’s incumbency, Sasha Obama had appeared on the mall in a purple coat by Kate Spade, thus handing a reporter an icebreaker on a silver platter — except Kate Spade beat her to the punch.

“So, I read that Sasha was wearing Kate Spade!” she said at the outset of the interview. She cannot take credit for the actual design, as she, her husband, Andy, and their two partners cashed out of the company that bears her name seven years ago to the tune of $59 million.

It must be pretty weird to hear your own name in such a public yet disassociated way.

“Oddly not,” said Kate. “I get asked that all the time. I always felt there was me and there was the company. It was obviously very personal, but I didn’t confuse a bill not getting paid by Kate Spade as me not paying it.”

Her excitement about the Obama endorsement seemed entirely genuine, without a trace of subtext.

“Oh, I think I want to write Deborah [Lloyd, Kate Spade’s president and chief creative officer] a note,” she said, turning to her husband. “Because it’s kind of a big deal.”

Even if the youngest Obama simply loves the color purple, the label stitched inside an 11-year-old’s outfit becomes a political statement when she’s a member of the first family on Inauguration Day. That she chose Kate Spade — or that it was chosen for her — is testament to the company, its image and values, which remain anchored in the Spades’ original point of view: American, wholesome and not too expensive.

Before they were Kate Spade the brand, the Spades were college sweethearts from the Midwest, she from Kansas City and he from Arizona. They came to New York after graduation to pursue fashion and advertising. She worked as an accessories editor at Mademoiselle and he was in advertising at TBWA/Chiat/Day.

Neither grew up fantasizing about being fashion designers, but they shared an entrepreneurial itch.

“I thought we’d start our own ad agency,” said Andy. “We kind of wanted to do our own thing.” One night over dinner at their favorite Mexican restaurant on the Upper West Side, they were talking business ideas and “Andy said, ‘Why don’t you do handbags? You love handbags, accessories,’ ” recalled Kate. “And I said, ‘It’s not like you can just start a handbag company.’ And he’s like, ‘Well, why not?’ ”

The Spades, who were not yet legally the Spades — Kate Spade had a better ring to it than Kate Brosnahan, her maiden name — did not have a formal business plan, but they did see the proverbial void in the bag market, which had yet to explode for the traditional ready-to-wear designer houses. There was Coach, there were the Europeans and there was a lot of leather and hardware going on. Kate knew what she wanted: simple, straightforward totes and shoppers. Her original samples were done in linen and burlap since the only fabric resource willing to sell to a no-name designer with no track record and no minimums turned out to be a potato sack company.

Eventually the bags evolved into the more durable nylon for which she became famous. Spade had 10 black and 10 navy made up for her first trade show at the Jacob K. Javits Convention Center in New York. They didn’t write a ton of orders, but they got the right attention, from Judy Collinson at Barneys, and Candy Pratts Price of Vogue, who featured Kate Spade bags in Vogue’s Last Look.

For the first few years the operation was “scrappy.” Kate as designer and Andy as creative director worked out of their apartment, took no salaries, and Andy always had one foot out the door, mostly for financial reasons but also because they weren’t sure. At one point he and Kate moved to Los Angeles for six months when he accepted a job as creative director at Saatchi & Saatchi. They thought about bailing on Kate Spade altogether, but their partners, Kate’s best friends Elyce Arons and Pamela Bell, pleaded — if they quit now, everyone loses everything.

Plus, things were on the upswing. In 1995, Kate Spade received the Council of Fashion Designers of America’s Perry Ellis Award for Accessories. Within a year, sales had topped $10 million. They were in Saks, Neiman’s, Barneys and Bloomingdale’s. In 1997, they opened their second store in New York’s SoHo on Broome Street, after outgrowing their first one on Thompson, with more planned for Los Angeles, San Francisco, Chicago and Japan.

They also launched shoes, a leather collection, secured an eyewear license and were dabbling in rtw.

Also, in what is perhaps the biggest measuring stick of a brand’s success, they were being knocked off left and right. The company had begun aggressively pursuing operations that infringed on its designs, settling cases against such major retailers as Gap, Dayton/Hudson and Kmart. The men’s accessories line, Jack Spade, came in 1999.

“We never thought about starting a company. We just said, ‘Let’s make some bags and see what happens.’ And people ask us now, ‘How do I start a company?’ It’s daunting,” said Andy. “You don’t start a company; a company is what you become if you are successful, right?”

A big part of what the Spades think made it resonate was their outsider, Midwestern sensibility. “Straightforward,” “optimistic,” “earnest,” “friendly” and “not pretentious” are words they used to describe their vision. Kate is the first to say she was never a trained designer.

“I wasn’t always sketching on top of some mountain overlooking the glistening sea in Belize,” she said. “The real truth of it is that I was crudely drawing and taking it to a patternmaker I found in the back of Women’s Wear Daily.”

At first, the girl from Kansas gave her a bit of a complex. She recalled how Linda Wells introduced her for her CFDA award, using the word “sensible” to describe the Spade aesthetic. “I remember at first going, ‘It’s sensible? So are running shoes.’ Now I look at [the original bags] and it’s true and I like that.”

In 1999, the Neiman Marcus Group acquired 56 percent of the company for $33.6 million in cash. “That was kind of a sign of relief,” said Kate. “We could get a little bit lifted off our shoulders financially.”

They continued on, market upon market, season after season, building the brand until, in 2006, they walked away. Kate and Andy, along with Arons and Bell, sold the remaining 44 percent of the company to Neiman Marcus, which in turn sold the whole thing to Liz Claiborne Inc. (now Fifth & Pacific Cos. Inc.).

There are no regrets. Judging from their Park Avenue apartment, decorated in an eclectically stylish mix of the modern, classic and earthy, their front door sweetly covered in artwork by their eight-year-old daughter, Bea, things are pretty rosy in the Kate Spade afterlife.

Kate is a full-time mom, one of her primary reasons for letting go of her business. “Having waited to have a baby as long as I did, which was 42, I wanted to be there,” she said. “I felt like it was a luxury I couldn’t pass up.”

Andy, who had grown restless at the fashion company, walked out of Kate Spade and launched his boutique creative agency Partners & Spade — “what, the day after?” All kidding aside, he had already begun to work on some of the pet creative projects that make up his business, which he describes as a “gallery and studio,” while he was still at Kate Spade. Partners & Spade’s client list includes J. Crew, Warby Parker, Roxy and Quiksilver.

Andy has worked on three movies in the past five years and has put out several books.

“I think we both loved inventing things and creating things,” said Andy. “We created [Kate Spade], and I felt like 15 years was probably five years longer than we thought we would actually go. We’re really lucky that it actually worked.…I felt, like, creatively it was complete.”

The couple still pays attention to the company, but with a healthy distance. “It’s like watching a stock,” said Andy. “Exactly,” said Kate. “I think they’ve done a great job, shepherding the brand. That was something we kind of jokingly said as we left, ‘Don’t make us afraid of our own name!’ And we’re not.”