NEW YORK — Evidenced by the new logo and white canvas-covered armchairs adorning the showroom, the relaunch of Calvin Klein Coats at Fairbrooke Enterprises is deliberately subtle.

To assure that stores know the distinction between the two... 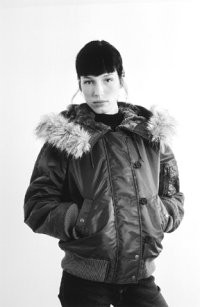 NEW YORK — Evidenced by the new logo and white canvas-covered armchairs adorning the showroom, the relaunch of Calvin Klein Coats at Fairbrooke Enterprises is deliberately subtle.

To assure that stores know the distinction between the two licensed lines produced by the outerwear specialists, one white-walled room houses Calvin Klein collection and another has CK. In the master suite, as it were, there is a 12-piece cashmere collection, developed for Bergdorf Goodman and other high-end stores featuring high-quality cashmere.

The addition of that group should help boost sales by a double-digit increase, Kim Hill, president of Calvin Klein Coats, said at a low-key relaunch party Tuesday night.

“There has been an overwhelmingly positive response,” Hill said. “We wanted to return to Calvin in his true essence. Some stores have said if they were to see these coats on the street, they would know, unquestionably, it was Calvin Klein.”

Highlights of the Kleinesque look are a belted black wrap coat; an asymmetrical zip-front tan coat with an oversized collar, and a full-length peacoat. The collection wholesales from $395 to $2,400, with the cashmere portion falling between $470 and $960. A national advertising campaign that will include cashmere is in development, and trunk shows and other in-store events are being planned. About 10 to 15 accounts are expected to carry the line, Hill said.

CK has a younger feel, aimed at women between the ages of 18 and 34. Prices are also geared for thinner wallets, with down jackets starting at $80 and ranging to $180, with one style maxing out at $318. Fairbrooke aims to expand doors with existing accounts, Hill said.

Earlier this month, Fairbrooke, which occupies four floors at 230 West 38th Street here, relocated the Calvin Klein Coats showroom from the fourth floor to the third. The new space is more in line with the designer’s minimalist aesthetics.