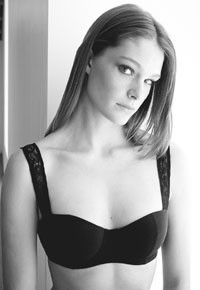 On top of its Choice Calvin Klein intimate apparel targeted at the 14- to 22-year-old consumer, which is also scheduled to be launched in July by The Warnaco Group, the company will introduce Sensual Support aimed at the style-conscious woman who needs and wants the benefits of support and control without forsaking fashion.

Lending a celebrity cachet to the launch will be Academy Award winner Hilary Swank, whom Calvin Klein Inc. has cast for print, outdoor and other media for the global introduction, as reported, in more than 50 core fashion and lifestyle magazines in 20 countries. The campaign, which breaks in August and September magazines, is being photographed by Steven Meisel.

Matthew McCarthy, executive vice president of Calvin Klein Underwear for women, said, “Sensual Support will be launched in 300 doors of major stores in the U.S., as well as Galeries Lafayette in France and Selfridges in England. The collection will be housed within the Calvin Klein Underwear area with our fixturing and visuals of Hilary Swank.”

McCarthy noted that the expansion into full-support undergarments was because 25 to 30 percent of women cannot wear Calvin Klein bras, a majority of which are engineered for light support and average figures in fabrics such as a trademark sheer Marcasite.

“They don’t work with this consumer’s figure type,” said McCarthy, noting that bra cup sizes in the new collection will be 34B to 38DD. The bulk of the business, which, according to industry estimates, could generate wholesale revenues of more than $25 million the first year, will be anchored in C and D cup sizes.

The Sensual Support line is focused and concise, and the color range will blend in with the existing line of Calvin Klein underwear for women in shades including black, nutmeg, violet and papaya for fall. Additional colors will be added for late fall and holiday.

Amy Ligouri, vice president of merchandising, displayed two basic groups: one called Lace Curves, which features three bra styles — a two-way stretch foam underwire bra, a full-coverage style and a framed underwire number rendered in one piece of fabric from the back of the wings to the front of the bra — and Pure Glamour, a group consisting of a U-wire balconette with retro wide straps, two strapless underwire styles and a cami with a built-in bra. In November, a Mesh with Lace group will feature another balconette style with wide lace straps and a framed underwire look.

A two-piece hangtag will feature the Calvin Klein Sensual Support name in black lettering on a pearlized beige ground, and a marketing tag line on a black ground with white lettering and two bullet points will say: “Designed for the Style Conscious Woman Who Needs Support,” and “Engineered for Comfort.”