Calvin Klein Inc. is on the road again.

By Emili Vesilind and Ritu Upadhyay and Ekta Sawiani on May 1, 2008
View Slideshow 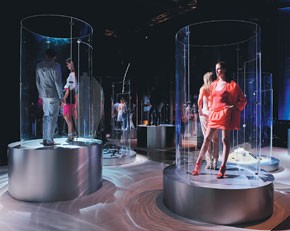 DUBAI — Calvin Klein Inc. is on the road again.

The fashion house last week held its first event in Dubai to introduce the spring collections of ck Calvin Klein and Calvin Klein. The event is part of the brand’s continuing series of international installations, which in the past have been held in Tokyo, Shanghai, Beijing and London.

More than 300 guests were invited to the lifestyle installation by Kevin Carrigan, the creative director of ck Calvin Klein and Calvin Klein Jeans, and Tom Murry, president and chief operating officer of Calvin Klein Inc., at the Four Seasons Golf Club. The club’s lounge was transformed into a gallerylike installation featuring 15 live models who were elevated on steel pedestals and enclosed in transparent Plexiglas columnar displays, giving the event a futuristic feel.

The minimalist installation was in unique contrast in a city known for its opulence and penchant for over-the-top design. “There is an appreciation of diversity and different styles here. Dubai wants to be perceived as an ultramodern city, as a city of the future. There is an understanding here between opulence and minimalism,” said Carrigan.

The brands featured in the show included ck Calvin Klein apparel, accessories, footwear, watches and jewelry; Calvin Klein Jeans apparel and accessories, and Calvin Klein underwear and eyewear. Some of the accessories and underwear were displayed on mini glistening sand dunes within the columnar installations, while others were worn by the models.

Calvin Klein fragrances launched the new Euphoria Intense scent and the new ck Calvin Klein line of color cosmetics, due to be launched in the region this month at the Debenhams department store in the Mall of the Emirates and previewed on the female models. In addition, the ck Calvin Klein men’s and women’s footwear offering was previewed in advance of the line’s arrival at retail for the first time in the United Arab Emirates this fall.

Calvin Klein has had a presence in the Dubai market for several years. However, the recent boom in the region’s infrastructure, economy, population and tourism has attracted many major fashion houses.

Murry said Dubai is a natural destination for the brand. “There is so much growth in the region and the nucleus of that is in Dubai.”

There are 18 freestanding stores in the Middle East, nine of which are in Dubai. The Calvin Klein brand is growing market share seasonally in the region. The Middle East represented approximately $50 million in retail sales last year. The company’s total sales for 2007 were $5.4 billion.

A new Calvin Klein Collection store will open at the Dubai Mall early this fall. Murry commented that, for an emerging market with a small population, the company does a high amount of Collection sales, reflecting the spending power in the Middle East.

Though the perception of the Middle Eastern consumer may be conservative, according to Murry, the company by and large has the same product mix in the region as it does in Europe. But Carrigan explained that there are regional modifications to the garments. “We do have to take into account climate, body fit and color. I’ll take the same sketch and make modifications for different markets.”

An area where the company is sensitive to the conservative nature of Middle Eastern society is in the display of their product. “We can’t always use the same ad images that we do in other markets in this part of the world,” said Murry.

Local operators of Calvin Klein Underwear stores have sometimes faced fines if window displays were deemed too risqué. There seem to be no steadfast rules for what is allowed and what isn’t, leaving retailers to tread a fine line of cultural sensitivity.

This was the case at Thursday’s exhibit, where underwear was not actually worn by the models, but artfully displayed on piles of sand.