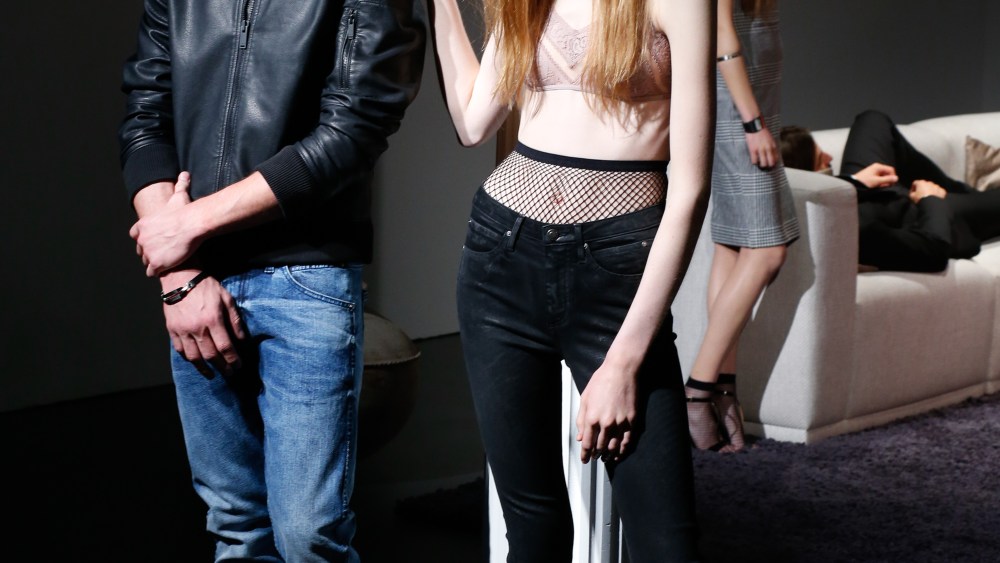 Branded hotels do not exist under the umbrella of Calvin Klein, but if they did, global creative director Kevin Carrigan has an idea of what the vibe would be at one. For his presentation of the many verticals that fall under his purview — men’s and women’s sportswear, jeans, underwear, performance and accessories — he staged a sexy, luxury lobby. The air was scented with incense, the throw rugs were plush and fuzzy and the guests felt free enough to lounge fireside in their skivvies, including the new erotic lace series Calvin Klein Tease for women and the silky, curve-hugging Calvin Klein Liquid group for men. “It’s my imaginary Calvin Klein Hotel,” said Carrigan. “We do Calvin Klein Home and everything, but we don’t do hotels — yet. But you never know.”

Naturally, everyone who checked into this particular lodge was beautiful, obviously sexually active and youthful. But not necessarily a kid. The women’s lingerie felt adult, as did a tuxedo-dressing vignette. In contrast, sporty cropped puffers and trim tweeds worn with hoodies, and black leather jeans and skirts from the new Calvin Klein Jeans capsule captured a young, street attitude. The mix of casual utility, naughty underwear, jeans, sneakers, creepers and bondage-esque jewelry had an old-school quality that Carrigan said was tinged with the Eighties, though the Nineties influence was undeniable, particularly in men’s wear. The guys wore military peacoats, zip-up sweaters and fur-trimmed hooded parkas. “Outerwear is really important for us this season,” Carrigan added. A relaxed, boxy flannel suit also pushed the retro feeling forward.

Framing the collections within the context of a hotel gave Carrigan a stylishly cohesive way to display the vast range of merch for which he’s responsible, and that can’t be easy. “It’s really about building a complete wardrobe,” he said, mentioning that combining the various collections is essential to the recent street- and celebrity-driven campaigns that have demanded a strong reaction. “We’re taking all these iconic ‘Calvins’ that we stand for and showing how one would mix them in a way that’s nonconformist and a bit irreverent.”

Can such a hefty serving of throwback ever feel truly fresh? Maybe not, but it felt very Calvin.