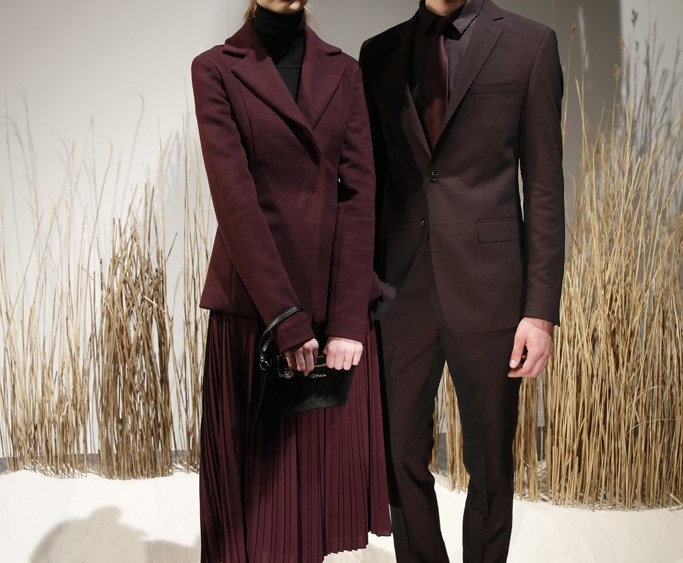 “Legacy,” “Heritage” and “Iconic feeling” are words that Calvin Klein global creative director Kevin Carrigan used to describe the brand’s fall collections he presented on Friday. “I was going back to the Calvin period when he was obsessed with Donald Judd and Marfa, Texas,” Carrigan said. “That feel of the natural, the organic, but yet the sculptural.” He also drew from the house’s memorable Bruce Weber moments and style of the late Carolyn Bessette-Kennedy, with one model bearing a striking resemblance to the former Calvin Klein employee. Those looks were translated into sophisticated, elegant pieces in soft tonal hues, i.e., all white, camel, black and burgundy. The silhouettes were more elongated than in past seasons, with coats, pants and skirts dropping below the knee. Textural elements like plush faux fur coats added to the rich feel, as did knit sweaters with a bold, almost curvilinear cable weave and faux leather and georgette pleated skirts.

The Calvin Klein Underwear and Jeans lineups were also shown, the latter including a new Rocker Kick denim silhouette (slightly high on the waist for women, low-rise for men) that was inspired by the famous Richard Avedon campaign of Brooke Shields kicking up her leg in her Calvins.

For the men’s wear, a tonal offering of suits, sportswear and outerwear centered around tones of gray with touches of wine. Shaped cardigans with intricate weaves, flecked double-breasted topcoats and slim streamlined pants worked well with the tweed suits and faux leather jackets in a motorcycle-inspired silhouette. Paired with the Rocker Kick jeans, the effect read Jim Morrison — just how Carrigan intended it.

The setting was equally cool, with models posed on islands of sand flecked with wheat stalks. “A little Montauk and Marfa…a little outdoors,” Carrigan said. “It’s that feeling of early fall when the sun changes around 4 o’clock.”