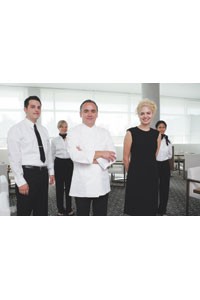 The era’s feel also goes beyond the furnishings. To reflect the glamour associated with travel at the time, the restaurant approached the Calvin Klein company to create uniforms. The collaboration came about three months ago, when Calvin Klein started to plan an underwear campaign party there.

“I knew exactly what I’d wanted to do,” said Lois Freedman, director of operations at Jean-Georges’ restaurants, when asked how she had envisioned the uniforms. “I went in there with the idea of a restaurant looking like a 1960s TWA first-class lounge … and the way that first-class flight attendants looked at the time.”

Freedman sent Kevin Carrigan, creative director for ck Calvin Klein and the better-priced Calvin Klein sportswear, elements of the restaurant such as samples of the wood, fabrics, tables, chairs and carpeting. For research, Carrigan studied black-and-white photos of TWA in the early Sixties as well as images of Jackie and John F. Kennedy. He even watched the movie, “Catch Me if You Can,” which starred Leonardo di Caprio and dozens of actresses dressed as chic Sixties flight attendants.

“You know how trolley dollys are thought of these days,” Carrigan said. “It’s not considered a chic job anymore. In the Fifties and Sixties, it was really quite exclusive and upmarket, and that’s what I wanted to convey.”

The looks come from the better-priced Calvin Klein sportswear, which is marked by its white label. For the male staff, Carrigan designed slim-cut black pants, a white shirt with a pointed collar and seams reminiscent of a men’s tuxedo shirt and a slim black tie, worn with a silver Tiffany & Co. tie clip. The female staff, meanwhile, wears a similar shirt and black pants, but accessorizes the look with a black neckerchief. The hostess wears a tailored black shift dress. “At the end of the day, I just thought it was very Calvin to do black and white,” Carrigan said.

Carrigan took special care when choosing fabrics, fully aware that they are subject to challenging conditions. “They are waiting and they’re moving, picking up knives and forks that fall over or spilling water over themselves all the time,” he noted.

He looked to Japanese mills for high-performance fabrics such as a Japanese crepe for women and a gabardine for men. “If they are coming home late from a restaurant and they need to wash that shirt again, they could wash it by hand, or they can send it out,” he said.

Freedman wants the Perry St. staff to have a classic and clean look with hair pulled back and minimal makeup and jewelry. “It should be really clean and sleek. I think it really does need to be uniform and express what we are trying to do,” Freedman said.

This isn’t the first Vongerichten restaurant with designer uniforms. Alpana Bawa outfitted the staff at Spice Market, while Vivienne Tam created uniforms for 66.

“When I go to restaurants, I love being waited on by people who are well-dressed,” Carrigan said. “They just act differently. They are more groomed and they command better.”

Perry St., which is expected to open its doors quietly this week, is located in the Richard Meier-designed towers on West and Perry Streets. Ironically, Calvin Klein himself occupies the top two floors of the building. Should he ever choose to pop down for a meal, he may even rub shoulders with Carrigan, who plans to frequent Perry St. “It’s such a beautiful space … if I can get in,” Carrigan quipped.