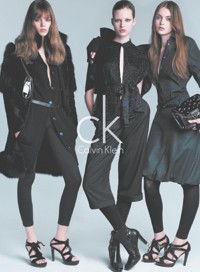 The fashion house is making a clear departure from previous seasons. For the first time, Francisco Costa, creative director of Calvin Klein Collection women’s, has had a significant influence on the message. The images were shot by of-the-moment photographers Mert Alas and Marcus Piggott, newcomers to Calvin.

Costa worked directly with Calvin Klein Inc.’s in-house ad agency CRK Advertising and Fabien Baron, creative director of the campaign, to create the concepts for the set and the styling. The additional influence in the campaign was a natural step for Costa, who was named Womenswear Designer of the Year by the Council of Fashion Designers of America this month.

“When you design a collection, you want to put forth an image that relates to it,” Costa said. “I wasn’t part of the past [campaigns], but it’s naturally how it should go. All the inspiration of the pictures comes from when we started [the collection].”

Costa cited the work of Man Ray and Lee Miller as his inspirations for the campaign, which shows the two models dramatically posing like movie stars from another era against or on top of angular white props that have been cropped in each photo.

The campaign was photographed at Pier 59 Studios here. It was styled by Karl Templer, with Bill Doig serving as the set designer.

The previous three Collection campaigns were photographed by Steven Meisel, with spring featuring Vodianova in a sunny setting.

“There is more of a class separation,” Costa said of the fall campaign. “I am not saying it’s elitist, but there is more a sense of control. With Mert and Marcus, the result was a feel of distinction, of making it really luxurious.”

Baron, who has contributed to many Calvin Klein images for the past 12 years, said he felt a sense of change at Calvin Klein, which steered the creative decisions.

“The first thing we did was to look at what Francisco had done, and the feeling, which was very 1930s,” Baron said. “We wanted to do something graphic and more spacious. The cropping and the way it was shot was more photographic. We wanted to do something more artistic, more graphic, spacious, and with more precision that has a reminiscence of something from the Thirties and Forties — and very elegant, very sophisticated, very upscale, very sexy.”

Baron also deliberately wanted to be different from the trend in luxury brand advertisements.

“When everybody else is focused on product-specific advertising — the bag, the eyewear — in a strong way, and advertising has become about product placement, we tried to do a feel that was more poetic, more reflective, a little bit more sexual in a way,” Baron said.

There had been speculation that Kate Moss, who was tapped for the Calvin Klein Jeans campaign, would also return to the Collection ads, especially since Vodianova gave birth only two weeks before the fall shoot. “We had always planned on using Natalia,” Costa said.

“Kate is much more urban in a way,” he said. “With Kate, you see that street-wise mentality. Also, Calvin as a house, and him as a designer, always moved on. It was always about the next thing. I think to go back to Collection with Kate would be a mistake, because she is already in five collection campaigns,” added Costa, noting it’s a different case with Calvin Klein Jeans.

For the better-priced Cal­vin Klein line, licensed to Kellwood Co., the campaign was shot by Mikael Jansson on location in Los Angeles, featuring models Doutzen and Gabriel Aubry in a street setting, with grainier images giving the ads a more cinematic feel. The bridge-tier ck Calvin Klein ads, meanwhile, were shot by Patrick Demarchelier at Pier 59 Studios. They have a multiple casting theme, with models including Vodianova, Freja Beja, Anna Mayria and Danny Beauchamp, in poses reminiscent of the ground-breaking ck One ads from the nineties.

The Collection ads will break in August books and will run through October. Six Calvin Klein Collection portfolios featuring four- to eight-page spreads will appear in September issues of Vogue, W, Harper’s Bazaar, Elle and Interview, as well as Vogue Japan. Company executives declined to disclose the cost of the campaign or the ad spend. CKI’s annual advertising and marketing spend is estimated to be more than $200 million. Overall, CKI’s number of U.S. ad pages will increase by 19 percent compared with last fall.

Costa, who did not consult Calvin Klein himself on the ads, indicated the importance of redefining what the brand stands for. “We wanted to create more prestige, with less product to make it more artistic,” Costa said. “We have to create what it stands for, which is luxury.”