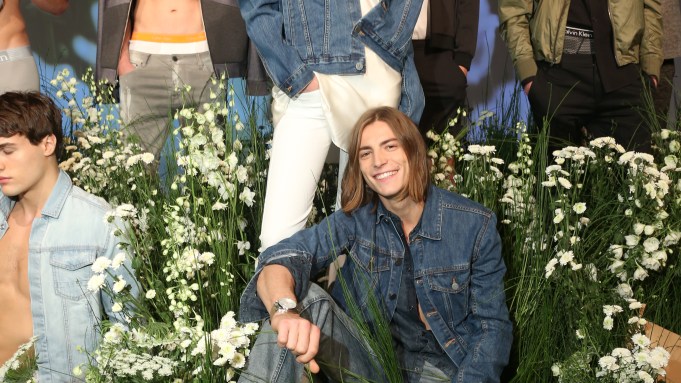 “Welcome to my festival,” said Kevin Carrigan, introducing his vast world of Calvin Klein spring, which encompasses Calvin Klein sportswear, jeans, underwear, performance, swimwear and accessories. Rather than separate all components, he integrated the various brands under a loose musical festival theme. A vignette of models lounged on a floral bed of margarita daisies and delphiniums dressed in nonchalant mash-ups of lingerie sweatshirts, slipdresses and denim derived from the current musical festival culture, which is in turn derived from Nineties culture, which is so Calvin.

The best women’s combinations crossed new blown-up logoed underwear with thick waistbands with silky, pajama loungewear, and lace lingerie and great bodysuits, which are having a moment, with sporty sweatshirts and sneakers for a cool, street, raver attitude. The total look felt on the pulse of the now, and Carrigan said much of it was inspired by what he sees through the #mycalvins Instagram campaign. “I didn’t do any ties, I didn’t do anything dressed-up,” he said. “Everything is dressed-down and undone. In this Instagram moment of how people dress, mixing in so many ways, we wanted to capture that spirit.”

For the men, that relaxed sensibility and eclectic styling shone through in the knitted double-breasted blazers over cropped sweatpants and an ultrathin hoodie worn over stretch cotton briefs. Faded denim was more deconstructed and “anti-tech” than in past seasons, Carrigan said, with a natural and earthy feel. White denim pieces sprinkled throughout added a touch of simplicity to the lineup, but an army green military-inspired nylon bomber put some directional, Coachella punch in the mash-up.