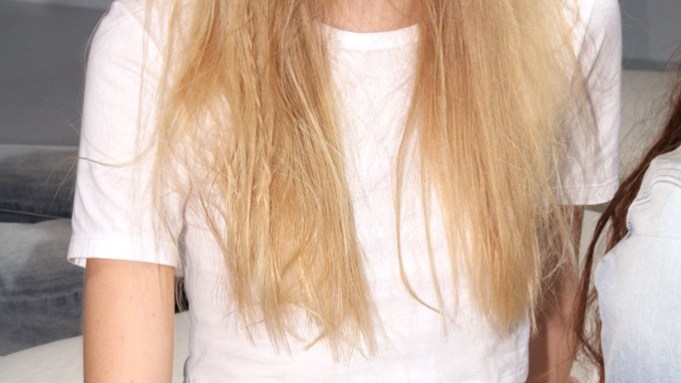 At Thursday’s Calvin Klein presentation for spring, global creative director Kevin Carrigan showed his multiple collections (sportswear, men’s, jeans, performance, swim, underwear, etc.) in a pop-up setting of a house frame. It, along with the clothes, was inspired by Mies van der Rohe. “This is about the foundation of ease, simplicity and the Modernist approach that Calvin Klein has always represented,” Carrigan said.

Sportswear and dresses were bright, with an emphasis on cobalt blue and viridian green (the palette was inspired by Ellsworth Kelly), often worked as color blocks or balanced with black and white. A loose black-and-white T-shirt was worn over a minidress — “skirts are much shorter this season,” Carrigan said — that was green in front, black in back. Most pants silhouettes were very lean; one pair of skinny jeans was paired with a matching cotton shirt, both in a vivid splatter-paint print.

The men’s lineup came in mostly black, white and gray with a few pops of cobalt. Stripes were rampant, yet updated for a modern man — a black-and-white collar looked striking on a polo shirt — while an updated Prince of Wales grid pattern was shown on a suit. Pants were cuffed this season, shirts were colorblocked and the denim was lightweight and superwashed. The company also took the opportunity to introduce a new model of underwear, the Concept, that features seamless technology in a high-performance fabric with a striped waistband that harkened back to the main collection.