The brand's spring presentation had an athletic-urban vibe. 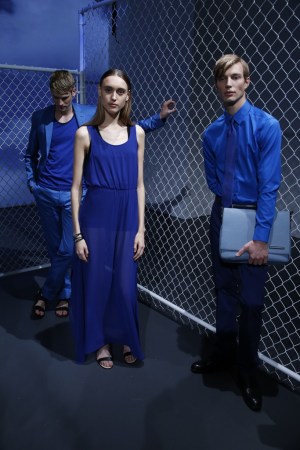 The set, a maze of white metal fencing, made a statement in and of itself at Calvin Klein’s spring presentation on Thursday, but of course there was a message behind it. Global creative director Kevin Carrigan was thinking about his first trip to New York: “I always remember the basketball court on Houston and Sixth, that urban feel…the kids on the outside and on the inside.” Thus, the collection’s athletic-urban vibe. For Calvin Klein White Label, there were moody shades of blue and black, some with white contrasts, and various takes on mesh, worked into sweaters, perforated PVC tops and skirts and body-conscious, fit-and-flare silhouettes. The men’s wear featured chain-link patterns on several looks including dress and sport shirts and bomber jackets.

The Jeans lineup was based on cloud washes that ranged in shades from bleached-out to superdark, while the Underwear category’s main feature was dual-tone looks done in specially developed cotton blends; the newest men’s style was a ribbed square-cut trunk.