Camila Alves Carried Away With Bags

When Camila Alves was jetting around the world as a runway model for Valentino and Carolina Herrera, or shooting campaigns for Escada and Giorgio Armani, the one thing she needed the most was a bag that suited all her needs and that wasn't something... 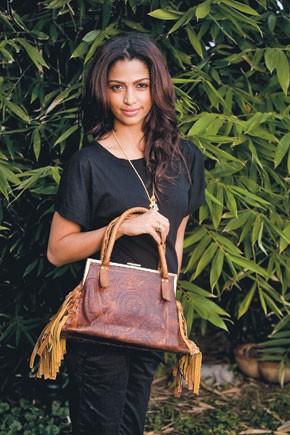 LOS ANGELES — When Camila Alves was jetting around the world as a runway model for Valentino and Carolina Herrera, or shooting campaigns for Escada and Giorgio Armani, the one thing she needed the most was a bag that suited all her needs and that wasn’t something every other fashionista had.

Since she had such a hard time locating such a bag, she elected to make her own.

For more than two years, Brazil-born Alves has been working on Muxo, her new line of leather bags and accessories that she is about to launch.

“We wanted to create something that was unique and not already in the market, and it took us that long to create this,” said Alves, who now lives in Los Angeles with her beau, actor Matthew McConaughey, with whom she is expecting a child. “My main goal was to create something where people didn’t have to compromise, that it could be exactly what they needed.”

The hand-stitched collection is heavy on details — leathers are weathered and distressed or embellished with lush fringes — and convey an old-world sensibility. Shades of chocolate, ochre and burgundy dominate the line and are designed to gain a patina of richness as they wear.

Alves said the name in reverse, Oxum, is an African river goddess, the idea of which inspired the line. The brand is etched into the leather in large, ancient-looking type.

“The name really caught my attention because I started thinking of the beauty of water, women and the ocean,” said Alves. “There was something mysterious about it.”

Alves is initially introducing the line through upscale Los Angeles boutique Diane Merrick, which will be doing an official launch event in May.

Alves is cocreating the line with her mother, whose background is in fashion design. All the leather is from Brazil and was selected for its ability to age well and how it would adapt to different finishing treatments.

Alves, her mother and two workers make the bags by hand in their studio in the South Bay area, where they take orders for custom designs. Retail prices run from $500 for clutches to $1,350 for larger bags. Alves said she has already started courting interest from prestige department stores and specialty boutiques around the country.

Not surprisingly, given her pregnancy, a baby line will come soon, encompassing diaper bags and baby carriers, as well as belts and jewelry. Throughout, Alves said the focus would be on custom-made pieces.

“I love those designer handbags, but think that if someone is going to pay a higher price, why have something that everybody else has,” she added. “Once a certain bag is not hot anymore, they will want the next thing. But to have a bag created for you is pretty special.”