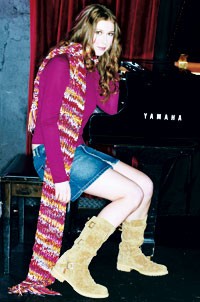 From Bach to Brahms, kids are going crazy for the classics these days. Cases in point: 17-year-old soprano Hayley Westenra tours the U.S. with her album “Pure,” while Juilliard students show their distinctive style and Sony unveils the youngest conductor ever to take on Beethoven.

NEW YORK — Not many adults — let alone teenagers — would have the nerve to stand and perform in front of President George W. Bush, Queen Elizabeth II and Prime Minister Tony Blair. But, during the president’s official visit to London in November, 17-year-old Hayley Westenra not only mustered up the nerve, she sang several Andrew Lloyd Webber tunes for the A-list audience, which, incidentally, also included Prince Charles, Colin Powell and Condoleeza Rice.

A lot has certainly happened for the New Zealand soprano since then. For one, her album, “Pure,” hit the one-million-copies-sold-worldwide marker, prior to its American debut earlier this month on Decca. She’s currently on tour and is scheduled to appear on television’s “American Dreams” this summer, no doubt as a soulful late-Sixties singer. And there also are rumors she’ll perform on “The O.C.”

Not bad for the New Zealand-raised teenager, who doesn’t have one Britney-sounding song in her repertoire, covering, instead, such classics as “Amazing Grace,” “Benedictus” and Maori traditionals like “Pokarekare Ana.” She also has worked with Sir George Martin, the legendary Beatles producer, and his son, Giles, who co-wrote the album’s “Beat of Your Heart” track.

“When I talked to him, I was thinking, ‘This is the George Martin,’” she recalls. “But I wasn’t sure whether to say ‘Sir Martin’ or ‘Sir George,’ so I just avoided using his name altogether.”

While Westenra, born and raised in Christchurch, has the kind of pipes that could bring her lasting international stardom, she displays none of the diva tendencies to which other talented singers succumb at a tender age. This may be partly thanks to the fact that her parents and younger brother and sister have made the trip with her. “They keep an eye on me,” she says of her parents, Jill and Gerald Westenra, who take turns chaperoning her at various events, shoots and interviews.

It’s clear she looks to them for guidance in all things, including fashion sometimes. “I don’t like my knees,” she says, suspiciously eyeing a miniskirt during a fashion shoot. When she looks to dad for his opinion, he offers simply, “If you don’t think you’ll be comfortable, you don’t have to wear it.”

That’s not to paint her as a pious princess. Except for the voice that takes her through Shubert’s “Ave Maria” with élan, she’s just like any other teenager, rattling off a list of her favorite singers. Justin Timberlake is tops, as are the Black Eyed Peas, Alicia Keys, Christina Aguilera and Celine Dion. She’s quick to defend the last two. “Christina has amazing vocals,” she says, “and what Celine can do with vocal gymnastics!”

Since she’s on the road so often, Westenra misses her friends back home and says she doesn’t have a boyfriend. “I don’t have time to meet people,” she says with the tiniest bit of regret. “And if I did meet someone, it would just be so hard being away.” But getting to travel the world does have its perks. “When I’m in a new city, it’s cool to get out and have a bit of a look around,” she says.

Westenra likes to check out local stores — Zara, H&M, London’s Ted Baker and Miss Selfridge’s and New Zealand’s Lippy and Wild Pair ranking highest. “I’m terrible at making decisions,” she says of her shopping habits. “I’m always like, ‘I have to think about it. I don’t know if I need it.’” When she does commit, she often opts for Miss Sixty, Diesel and D&G.

But at the end of the day, this is a no-frills kind of girl, preferring to let her voice make a statement. “My favorite look is jeans and a T-shirt,” she says, “nothing too fussy.” — Nandini D’Souza

Last month, a record was set in Bunkamura Orchard Hall in Japan: The world’s youngest conductor led the Tokyo Philharmonic Orchestra in the opening movement of Beethoven’s Symphony No. 5.

The big deal, however, wasn’t the fact that QRIO (pronounced CUE-ree-oh) was barely six months old, but that he was the first robot to take charge of a classical baton. Yes, a robot. Standing a mere 23 inches and weighing only 15 pounds, the Sony-built bot took to the podium like a grand maestro, gesturing with the force and rhythm typical of more experienced conductors.

Introduced last September as Sony’s Corporate Ambassador, this humanoid machine has mastered more than a little one-two-three of the wand. He sank a putt at the last Sony Open in Hawaii, performed a traditional Japanese fan dance at the National Cherry Blossom Festival in Washington and even starred in an episode of the popular cartoon “Astro Boy,” reading his lines alongside actors in the studio. And this coming Saturday he’ll flex his magnesium-alloyed muscles by throwing the first pitch in the Mets vs. Padres baseball game in San Diego.

As for QRIO’s musical prowess, aspiring Leonard Bernsteins needn’t worry. Terry Pender, adjunct assistant professor of music at Columbia University, says Beethoven isn’t that challenging. “If it was something like Stravinsky, then that would be different,” Pender says. “And an opera where the conductor is really waiting for cues from the singer, that would be difficult for a robot to do.”

Brass musicians, however, should take notice. Toyota recently unveiled its trumpet-playing robot, complete with artificial lips. Its debut tune? “When You Wish Upon a Star” from “Pinocchio,” of course. — Venessa Lau

Individuality is the norm for Juilliard students, who are more likely to hear Vivaldi or Handel blasting in the dorm at 4 a.m. than anything else. Not surprisingly, their creative temperaments extend to their clothing, which features abundant vintage, self-designed and modified pieces. Here, a look from a recent visit to the Lincoln Center campus.