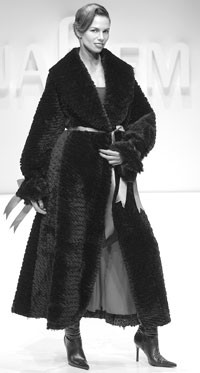 MONTREAL — For the second year in a row, fur retailers are coming off a strong season as the U.S. economy picked up steam and cold temperatures in the Northeast kept sales robust, according to buyers attending the 22nd annual North American Fur and Fashion Exhibition in Montreal here May 2-5 at Place Bonaventure.

The 200,000-square-foot exhibition hall was sold out again this year as 200 exhibitors were busy taking the orders of buyers from around the world. Fur sales in the U.S. last year increased 13 percent to $1.7 billion from a year ago, while estimated sales in Canada rose 5 percent to 6 percent to $350 million, according to the Fur Council of Canada. All figures have been converted from Canadian dollars at current exchange.

As an indication of how NAFFEM has changed, the show featured for the first time an accessories gallery that reflected how fur is used in every aspect of fashion, from handbags to jewelry and scarves.

“We’re trying to attract more high-end fashion boutiques while the traditional fur stores are broadening their mix to extend their season,” explained Alan Herscovici, executive vice president of the Fur Council of Canada. “Because the North American fur industry is under increasing pressure from less-developed and lower-cost countries, our styling has to be impeccable to compete.”

Innovation is key, which is why Fur Works Canada, a sportswear fur concept, was developed several seasons ago. Next winter, Fur Works offers a twist to urban fashion, such as a microsheared beaver jogging suit, fur and leather jackets in contrasting shades and reversible jackets. Active-inspired jackets, with the accent on details such as colorful taping and metal fasteners, are also in the mix.

Buyers at the show reported sales were up compared with last year, due partially to cold weather.

“We had a wonderful season,” said Richard Goldman, owner of Albert Furs in Cleveland. “Fur has become very diverse, encompassing all sorts of outerwear.”

Goldman said sales were up 15 to 20 percent and likened the conditions to a “perfect storm.”

“We had a cold winter coupled with tremendous exposure of fur in the fashion press and there’s an uptick in the economy,” he said.

As a result, Goldman’s inventory is low and his open-to-buy was higher than last year. He said NAFFEM accounts for about 40 percent of his fur purchases, followed by New York at 35 percent and the balance in Europe.

“Color is a huge story for us, particularly pink and blue. I especially like what Zuki is doing and want to be part of that,” said Goldman. Zuki shook things up at the event’s annual fashion show, with sheared beaver full-length coats and short jackets in floral, zebra and butterfly patterns.

Sales were a bit better than last year for Alexandros Furs of New York, according to Tommy Demetriades, creative director. The company manufactures about 75 percent of its merchandise and buys the rest at shows.

“We traditionally start selling in mid-September, but last year it was closer to mid-August and we’re still moving product. We also sold more expensive items this winter and have lower inventory,” said Demetriades, who bought sheared beaver from Antonio Proietti and sheared mink from Soulis Furs of Greece.

This year, the retailer is stocking pink, purple and white furs for next season along with traditional colors.

Sales were up “marginally” and reversible coats set the pace at Capital Furs of Lansing, Mich., according to assistant buyer Lee Steavens.

“Reversibles were big business for us and helped us to have clear inventory, with the exception of long-haired beaver, which was a slow mover,” Steavens said. “But overall, our open-to-buys were up.”

The story was similar in Canada, where the nine Holt Renfrew & Co. stores enjoyed higher sales this past season, said fur buyer Neil Yarrow. He said sales were fueled by a cold winter and fur’s increased popularity.

“Fur is in all the fashion magazines, which helps our business,” Yarrow said.

Holt Renfrew carries designer labels from Europe and the U.S., including Valentino, Vera Wang and Michael Kors. As a result, NAFFEM is more of a looking show than a buying event for the chain.

“We carry exclusive labels because a lot of Americans shop our stores, and that’s what they’re looking for. We don’t carry a lot of sheared beaver, which is big at the show,” said Yarrow. “But there were a lot of accessories this year, which was an interesting addition.”

Exhibitors were equally enthusiastic about the interest in fur. “We wrote quite a bit of paper on Sunday, but we’re always busy,” said Sheldon Rockler, a 15-year show veteran and owner of L.A. Rockler Fur Co., Minneapolis. “About 99 percent of the buyers are American. That’s why we’re here.”

At the show for the second consecutive year, Robert Kipperman, owner of Kippys in Coronado, Calif., was busy selling his embellished fur coats with crystal and dyed pink wolf, as well as leather jackets and motorcycle jackets with crystal.

“We’re famous for our alligator belts with crystal that retail for up to $800 and are worn by people like Madonna, Kid Rock and Maria Shriver. Our products are sold in Harrods of London and Henri Bendel in New York.”